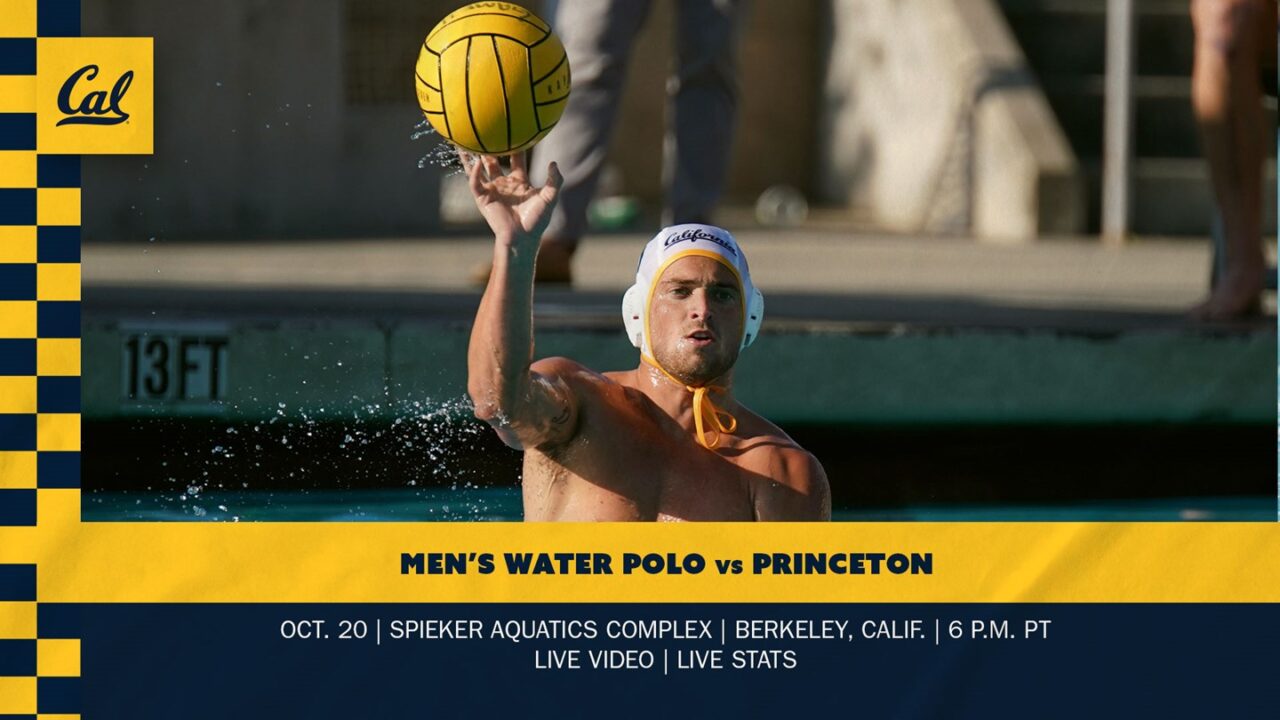 The No. 2 Cal men's water polo team is right back at it Wednesday with a rare midweek evening contest against No. 12 Princeton at Spieker Aquatics Complex. Current photo via Catharyn Hayne

Riding the high of a thrilling come-from-behind 14-13 victory over No. 6 UC Santa Barbara on Sunday, the No. 2 Cal men’s water polo team is right back at it Wednesday with a rare midweek evening contest against No. 12 Princeton at Spieker Aquatics Complex. The Bears and Tigers met once earlier this season, with Cal pulling out an 11-9 victory at the Navy Open. Following Wednesday’s game, the Bears will have 10 days off before hosting No. 5 Long Beach State on Oct. 30. Princeton fell to Pacific on Monday night in Stockton.

CALL IT A COMEBACK

Spieker Aquatics Complex was buzzing Sunday afternoon as the No. 2 Cal men’s water polo team blitzed No. 6 UC Santa Barbara with dominating play on both ends of the pool in the second half to complete a come-from-behind 14-13 victory. The Bears fell behind 12-7 at halftime only to hold the Gauchos to just a single goal on a penalty shot the rest of the way. Meanwhile, Cal went on a 6-0 run to take a 13-12 lead with 1:37 remaining, and after UCSB momentarily tied it at 13-13 at the 1:19 mark of the fourth quarter, junior Garrett Dunn broke the tie once again with the game-winning goal with 56 seconds to play.

The Bears swept the MPSF weekly awards for the second consecutive week, with junior center Nikolaos Papanikolaou earning MPSF Player of the Week honors and freshman Max Casabella being named Newcomer of the Week for the second straight week. Papanikolaou scored six goals on six shots during Cal’s 14-13 win over No. 6 UC Santa Barbara, while also earning an MPSF season-high 10 exclusions. It was his second conference Player of the Week award this season. Casabella registered two goals and three assists, with all three assists coming during the Bears’ deciding 6-0 run in the second half, including on the game-winning goal by Garrett Dunn with 56 seconds to play. Casabella’s second goal also brought the Bears to within 12-11 at the 4:50 mark of the fourth quarter.

After allowing 12 goals in the first half Sunday to No. 6 UC Santa Barbara, Cal goalie Adrian Weinberg was brilliant after halftime, making 10 of his 17 saves and allowing just a singular goal on a penalty shot. His second-half efforts in the cage allowed the Bears to erase a 12-7 halftime deficit and pull out a 14-13 victory. Weinberg leads the MPSF with 155 saves despite missing the season’s first four games to compete with Team USA at the FINA Junior World Championship. Weinberg also registered a career-high 20 saves during the Bears’ 7-6 victory over then-No. 1 USC on Oct. 9, making him just the 14th goalie in MPSF history to have a 20-save game.

Cal head coach Kirk Everist registered his 400th career win on Sept. 18 when the Bears defeated San Jose State at the Aggie Shootout. Now in his 20th season leading the Cal program, Everist has a career record of 406-125. He was named the MPSF Coach of the Year last season for the second time in his career and has led the Bears to three NCAA titles, most recently in 2016. Everist was a three-time All-American as a player for Cal and went on to play for Team USA twice in the Summer Olympics.

Junior center Nikolaos Papanikolaou was named the MPSF Player of the year and an ACWPC First Team All-American last season, and he’s making the case to take home more honors this year. Arguably the most unstoppable force in the college game, Papanikolaou leads the MPSF with 50 goals and 24 steals, as well as a whopping 87 earned ejections. He had 10 earned exclusions during Sunday’s 14-13 win over No. 6 UC Santa Barbara, which is the most in a game this season by an MPSF player. He is also tied for the most goals scored in a game this season by an MPSF player with seven, having done so in a win over Cal Baptist on Sept. 17.