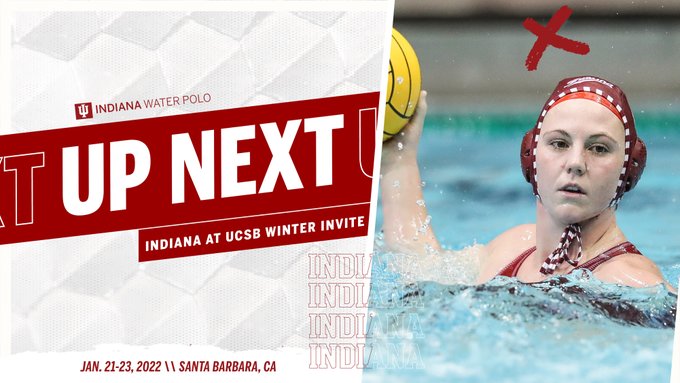 Indiana will begin the season ranked No. 11 in the CWPA poll and are coming off a 10-17 overall finish and 2-13 mark in MPSF play in 2021. Current photo via @IndianaWPolo/Twitter

There will be no video or live stats for Indiana during this tournament. Quarter updates will be posted on the team’s Twitter account @IndianaWPolo

Trio Named Team Captains
Indiana head coach Taylor Dodson announced the team’s captains for the 2022 season in senior center Izzy Mandema, junior utility Zoe Crouch, and junior attacker Lanna Debow. The trio were all 2021 MPSF All-Academic and Academic All-Big Ten award winners and return as three of IU’s statistical leaders from a season ago as they bring back a combined 134 goals, 69 assists and 23 field blocks.

Recapping 2021
Indiana will begin the season ranked No. 11 in the CWPA poll and are coming off a 10-17 overall finish and 2-13 mark in MPSF play in 2021. They return their five leading scorers from last season behind 84 points by Crouch in her sophomore campaign. Mandema, senior attacker Doherty, and senior goalkeeper Mary Askew highlight returners earned ACWPC All-American honors a season ago.

The 2022 Schedule
Indiana will play nearly all of its games away from home in 2022, playing just two weekends at Councilman-Billingsley Aquatic Center in March. They will spend the majority of the preseason on the west coast with tournaments also at Michigan and Harvard. The bulk of the MPSF season will begin in early March as Indiana only hosts California (March 21) and San Jose State (March 26).