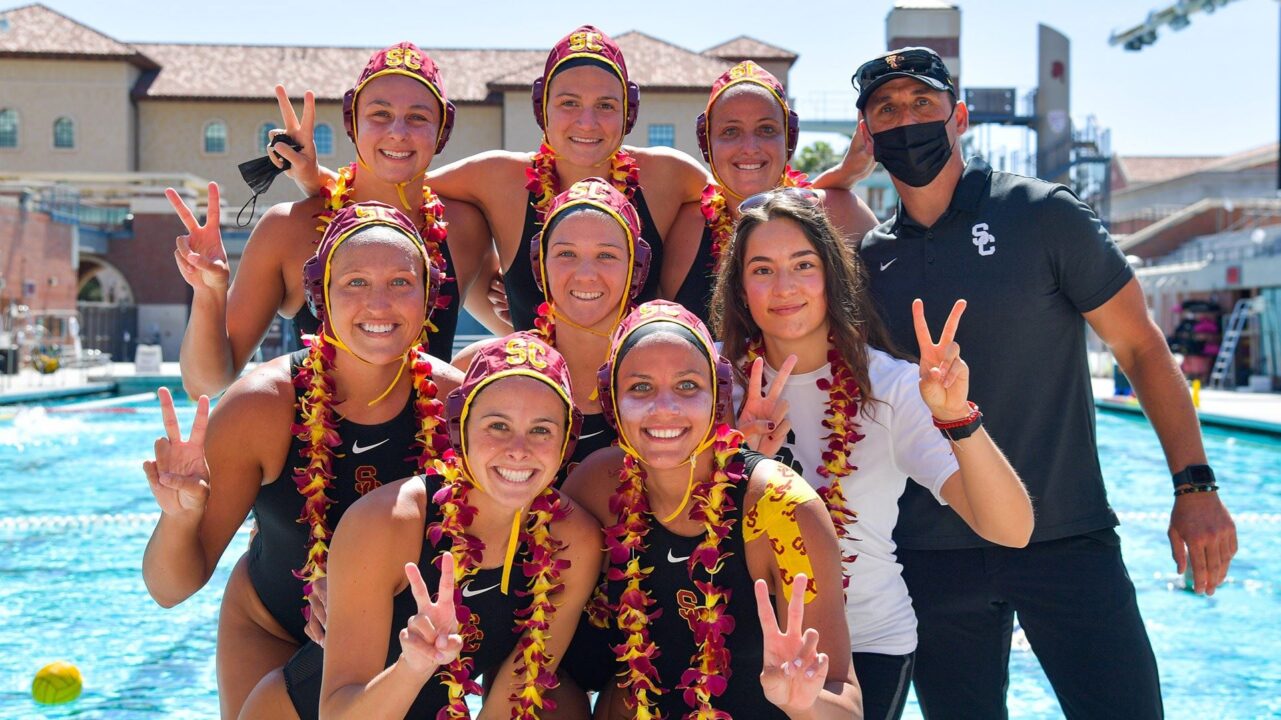 The Trojan women beat the Sun Devils twice on the weeknd to improve to 16-0 on the season and 10-0 in MPSF play. Current photo via John McGillen

LOS ANGELES — The No. 1 USC women’s water polo team locked up another win with a second-half power move to create some space and secure a 10-7 victory over No. 5 Arizona State today at Uytengsu Aquatics Center. The Trojans served up six goals in the half and gave up just three to help keep the nation’s top-ranked team undefeated on the year. USC is now 15-0 overall and 9-0 in MPSF play.
The sure-handed Maud Megens kept USC on track, with three of her final four goals coming in the first half as the teams fought through four ties. Denise Mammolito had netted a 2-1 lead for USC on a 5-meter penalty shot in the first but ASU would work ahead in the second, leading it 4-3 until Megens ripped in the equalizer just 22 seconds before halftime.
USC would not trail again, as Mireia Guiral went crosscage on a USC 6-on-5 early in the third for a 5-4 advantage. ASU answered back for another lockup, only to see senior Kelsey McIntosh earn a power play for her Trojans, then finish it off herself to get USC back on top. Fellow senior Verica Bacoc hammered one home next, and USC had the game’s first two-goal lead, up 7-5 with 3:02 left in the third. It would be a 7-6 margin entering the fourth, but USC got right back down to business. Guiral fired off another blast out of set, and then McIntosh found Megens for a fearsome fake and fire to net a 9-6 lead for USC. A Sun Devil 6-on-5 would go, but Mammolito sizzled in a skipper in the final minute to lift USC to its final winning score of 10-7 to cap the day’s action.
Tomorrow (April 18), USC plays its final home game of the year, and will honor its eight departing seniors in a Senior Day ceremony before the 11 a.m. contest against the Sun Devils.
#1 USC 10, #5 Arizona State 7
April 17, 2021 | Uytengsu Aquatics Center (Los Angeles, Calif.)
USC  2 – 2 – 3 – 3 = 10
ASU  2 – 2 – 2 – 1 = 7
SCORING:
USC — Maud Megens 4, Denise Mammolito 2, Mireia Guiral 2, Kelsey McIntosh, Verica Bakoc.
ASU —  Bente Rogge 2, Luca Petovary, Abby Begg, Lara Kiss, Amira Van Buren, Borbola Kekesi.
SAVES: Holly Parker (USC) 9, Chelsea Karimazondo (ASU) 11.

LOS ANGELES — The No. 1 USC women’s water polo team hit the gas early in its Senior Day clash with No. 5 Arizona State, crafting a 3-0 lead to establish position and then remain in the driver’s seat for a final 11-8 win today at Uytengsu Aquatics Center. It was the top-ranked Trojans’  final game of the season at home, giving USC an opportunity to celebrate its start-studded class of eight departing Trojans — Verica Bakoc, Nina Ceklic, Kari Jensen, Denise Mammolito, Kelsey McIntosh, Maud Megens, Holly Parker and Randi Reinhardt. The win keeps USC perfect on the year, now at 16-0 overall and 10-0 in MPSF play.
In fitting fashion for Senior Day, the first blast of the day featured a pop pass from super senior Kelsey McIntosh to senior Verica Bakoc to ring up an early 1-0 lead for the Trojans. Grace Tehaney and Julia Janov would go back-to-back next, and USC was up 3-0  on the Sun Devils. ASU would respond by converting two 6-on-5 opportunities, and it was 3-2 after eight minutes of action. After a defensive battle to start the second, the Sun Devils would snarl it up with an equalizer from distance. The Trojans would respond in kind, drumming up a three-goal rally on blasts from Mireia Guiral and Janov before Guiral drew a 5-meter penalty shot for Maud Megens to hammer home to punch up a 6-3 lead for USC. ASU struck again, but McIntosh came through with a ripper to tug the Trojans ahead 7-4, and then Holly Parker hauled in a save to wrap up the first half.
The teams would stay in stride in the second half, with Guiral and Bakoc answering ASU scores in the third. Bayley Weber sizzled one in to get USC ahead 10-6 to open the fourth, and about a minute later Tehaney tallied her second to serve up USC’s final goal in the eventual 11-8 Trojan victory.
USC will wrap the regular season next weekend in Westwood with 11 a.m. meetings with rival UCLA on Saturday (April 24) and Sunday (April 25) at Spieker Aquatics Center.
#1 USC 11, #5 Arizona State 8
April 18, 2021 | Uytengsu Aquatics Center (Los Angeles, Calif.)
USC  3 – 4 – 2 – 2 = 11
ASU  2 – 2 – 2 – 2 = 8
SCORING:
USC — Verica Bakoc, Grace Tehaney, Julia Janov, Mireia Guiral, Maud Megens, Kelsey McIntosh, Bayley Weber.
ASU — Amira Van Buren 4, Lara Kiss 2, Blaire McDowell, Abby Begg.
SAVES: Holly Parker (USC) 6, Chelsea Karimazondo (ASU) 8.