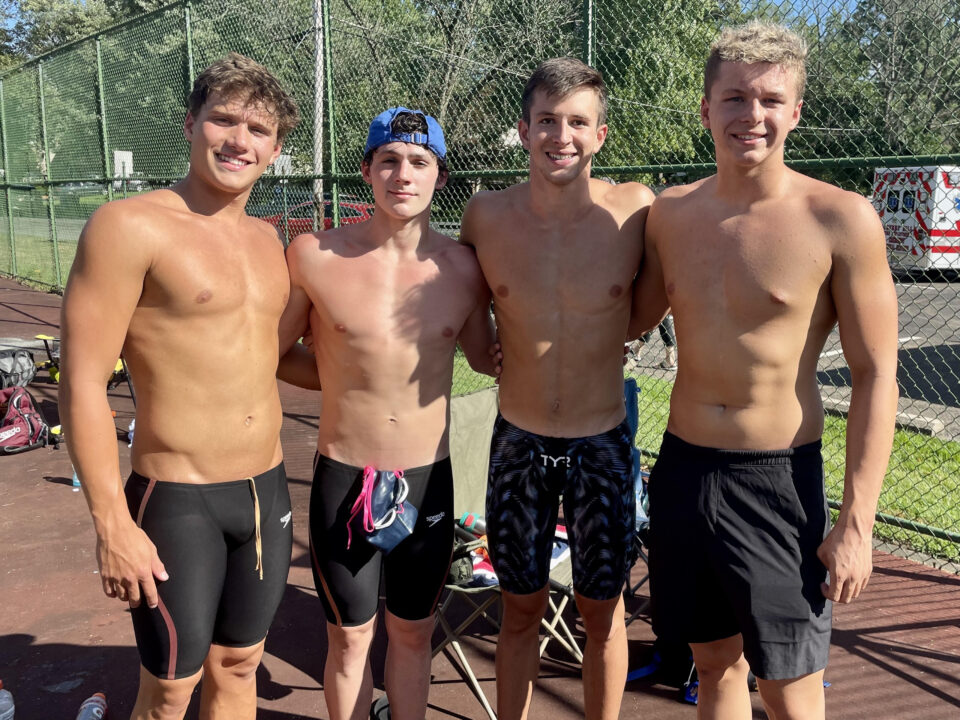 Willowdale’s Josh Seidman (17), Nick Pezzella (18), Ryan Cortes (17), and Nick Short (18) took down the two short course meters records in the 200 medley and free relays. The boys’ 200 medley relay performance proved to be the more impressive of the two since their time was faster than the SCM NISCA public school record.

The relay team posted a time of 1:43.85 which shaved off one second from the previous Tri-County Summer League record set in 2015. The four boys who attend/attended public high school swam a time that was faster than the current national public high school record of 1:43.99.

The overall high school record was set by Phillips Academy Andover in late 2018 with a record-shattering 200 medley relay swim (1:41.15). Previously, the record was a 1:43.97 held by The Baylor School.

Seidman is the only one of the four who does/did not attend Cherry Hill East High School. He is a rising senior at Eastern Regional High School located in Voorhees, NJ. Cortes is also a rising senior and will return to the Jersey Wahoos club team where he will once again swim with Seidman.

Pezzella and Short are recent Cherry Hill East graduates and both swam for South Jersey Aquatic Club. This fall, Pezzella will be starting his freshman year at Georgetown University, and Short will begin his collegiate career at the University of Pittsburgh.

The boys who have been swimming for the summer league Willowdale club team since they were in the 11-12 age group finished with a lifetime best of 1:34.29 in the 200 free relay.

I think this is awesome! Congratulations! As a veteran college, club and summer league coach, any time you can teenagers out (especially older boys!) and having fun (& being fast!) it is a great thing for the younger kids to see and our sport! Bravo!

Looks like the work of Coach Lou is paying off at South Jersey!! Keep the LLC going big guy .

This is cool and is probably a blast for the younger kids to watch! Sadly, it wouldn’t be allowed to happen in Northern California where USA Swimmers are not allowed to swim for their summer league teams. One team makes the rules that the other 60 have to follow.

got a link to info about that? Id like to hear about it.
Im fortunate enough to live in the league this article is about and would have a real problem with that. My kid likes winter swim; but summer league is where he gets super competitive and has the most fun.

Here you go. Summer league around here could be so much more fun if the year round kids could compete for their rec teams. It would add excitement and intensify neighborhood rivalries. There are a lot of reasons why this would be a good move, but sadly, one club has a lock on the rules. It’s gotten so petty that they actually disqualified a team from entering relays into the championship in 2021 coming out of COVID for holding practices/clinics in January and February when there was still uncertainty about whether or not there would be a summer season!

It’s really one person and a few followers that keep these ridiculous policies in place. They used to make USAS… Read more »

It is sad that our Committed year-round swimmers are not given the opportunity to swim with there summer league friends. They are restricted from participating because they are on a USA club team in January- Aug.

Think about that! Think about all the inclusiveness that is happening in our sport. A child Trains hard and it’s not afforded the opportunity to swim because a league, a team, a board decides that they don’t want those kids in their meet.

Why not, I say! Who or what are you Protecting? Does this help or hurt the sport?

Again, the goal of this web site and swimming should be to celebrate our sport and to give everyone that opportunity

Wow, that is disappointing. I get what they are trying to accomplish with that rule — give kids that don’t or can’t swim in the winter a chance to win. But it is really a disservice to those kids. So a kid swims recreationally in the summer and thinks, “Hey I like this, I should swim in winter.” then they are forced to choose between pursuing that or giving up swimming with their friends in the summer? That just ends up penalizing all the kids.

In tricounty (the OP area) the summer leagues feed the winter teams and vice versa. Sure the kids that swim in winter and end up the stars of the summer team; but even the kids… Read more »

SCM is such an uninteresting topic in the US

Our sport and this website is all about the celebration of our sport! I’m happy to see that a group of young man achieve something it is noted and we celibate it.

SCM- awesome!! They set the bar now it’s up to someone else to get it