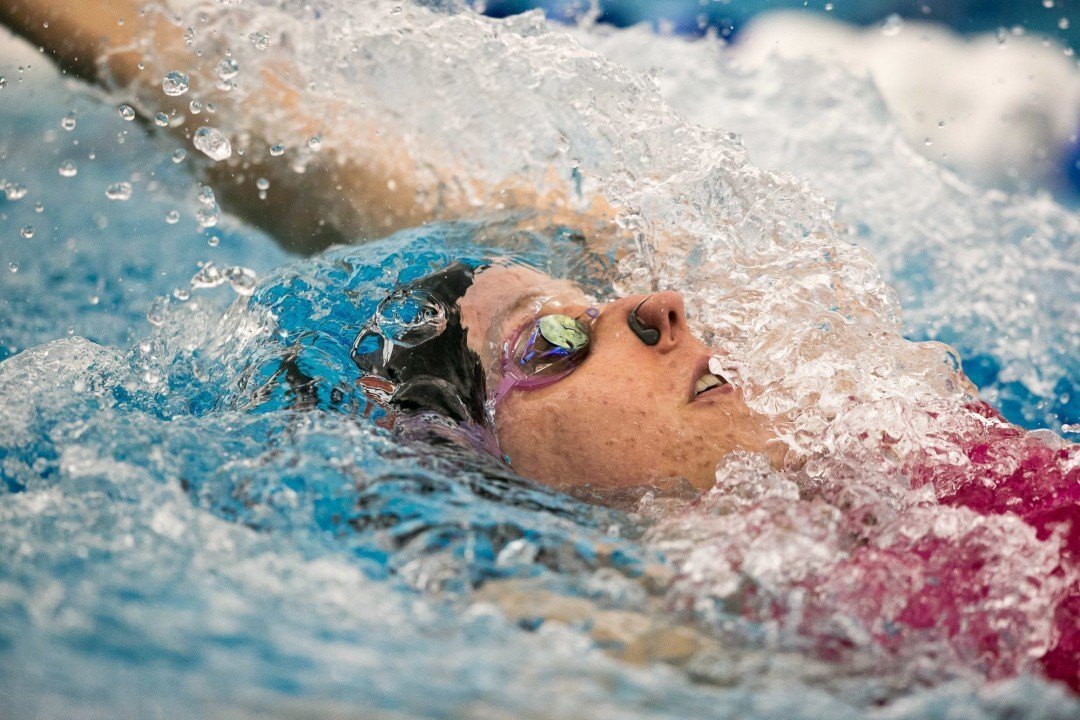 North Carolina State's Alexia Zevnik leads the pack in the 200 IM on the opening session of the 2015 Janis Dowd Nike Cup hosted by University of North Carolina at Chapel, NC. Current photo via NC State Athletics

Day one of the 2015 Annual Nike Cup hosted by the UNC Tar Heels at the Koury Natatorium  is under way with Yale, North Carolina State, and Duke having strong morning swims. This year the Nike Cup is being run with the Janis Hape Dowd title to pay homage to the ’76 Olympics alumna. The morning events consisted of the 500 yard free, 200 yard IM, and the 50 yard free.

Canadian Alexia Zevnik from NC State’s Wolfpack edged Duke’s Leah Goldman in the 200 IM for the top seed at 1:58.01 versus 1:58.41. Third place finished nearly four seconds later but the Blue Devils matched Yale’s 500 placement by putting four of their own in the 200 IM A-final.

Riki Bonnema of NC State was just shy of breaking 22 in the 50 free but she waxed a half a second off her seed time and sits on top at 22.04. Blue Devil Maddie Rusch dips well under 23 and holds on to her 2nd place seed at 22.22 while another Wolfpack member Ashlyn Koltetic (22.50) rounds out the sprint final top-three. Yale only gets one in the fastest flight with Bella Hindley (22.58) while the rest of the final is divided up by Duke, UNC-Chapel Hill, and another NC State sprinter.

Navy senior Thomas Duvall dropped a whopping 8.08 seconds off his seed, registering a 4:24.80 for the 500 yard free’s top spot. Places 2 – 6 were contested by less than a second by Yale, NC State, and UNC-Chapel Hill swimmers with the top-eight all under 4:30.

Ryan Held kept the NC State winning streak going in the 50 yard free with a .01 photo finish over Blue Devil James Peek with 19.78 and 19.79, respectively. Peek’s second place finish did however prevent a NC State sweep of Joe Bonk (19.82) and Andreas Schiellerup (20.00), they settle in for tonight at 3rd and 4th. The Pirates of East Carolina had Shawn Hunter as their second A-finalist of the day at 5th and Duke closed out the top-eight at 6th and a tie for 7th at 20.33.