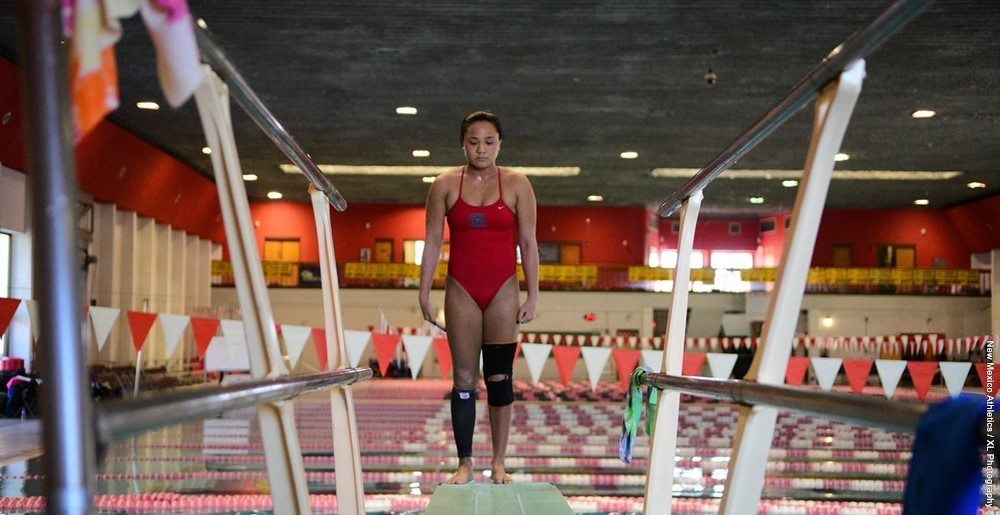 UNM started off the meet strong, tallying victories in the first three events on the day, two of which came on back-to-back wins from senior Adriana Palomino in the 1000- and 200-yard freestyle.

In the first event of the day, the Lobos’ 200-yard medley relay team of senior Konoha Shinada, junior Breanna Wiercinski and freshmen Hedda Øritsland and Katie Pollock produced the fastest time with 1:45.99 to take the event.

UNM actually finished with the top three marks in the 3-meter dive as freshman Jocelyn Gallais took third in the event with a score of 266.55. Dark also finished third in the 1-meter dive with a 256.85 to give the junior a pair of top-three finishes of her own.

The final Lobo to win an individual race was senior Carol De Groote Tavares in the 200-yard backstroke, touching the wall at 2:06.39 to win the race.

UNM closed the day with a final win in the 400-yard freestyle relay, with Shinada, De Groote Tavares, Palomino and sophomore Matea Sumajstorcic (3:33.04) earning the victory.

The Lobos will return to the pool in 2019 with a meet at Pepperdine on Jan. 5.

Williams scored a 265.90 in the 1-meter dive to place second in the event. The mark earned Williams CSU’s first NCAA qualifying score of the year. Williams also finished fourth in the 3-meter dive (256.65).

CSU swept the podium in the 200 butterfly, won by Frederick. Marie Goodwyn took second (2:11.60) and Ida Donohue placed third (2:14.32), and all three Rams beat the field by almost two seconds.

CSU only scored dual meet points against New Mexico, losing to the Lobos 168-130.

IN THEIR WORDS…
“It was a tough meet for us but we had some bright spots, including several strong individual performances. I’m especially proud of Skylar Williams for earning the first NCAA zone cut of the season.” – CSU head coach Woody Woodard

UP NEXT…
CSU will compete in the FAU Invite in Fort Lauderdale, Fla., on Dec. 20.

The Falcons finished with four top three finishes on the day. Leading off the meet, Air Force took third in the 200 medley relay, finishing with a 1:48.61. One of Air Force’s individual third place finishes came courtesy of junior Autumn Wolfgramm, as she placed third in the 100 free with a 54.49. The other was by freshman Evelyn Johnson in the 200 breast, as she timed in with a 2:29.64.

Air Force’s highest finisher was sophomore Kylie Stronko, as she took runner-up at in the 100 back, clocking in with a 58.61. She finished higher than any New Mexico swimmer.

On the diving board, junior Eve Fowler was the Falcons’ highest placer in the 1-meter, taking fourth with a 252.85, her highest score of the season, as well as the team’s highest 1-meter total. In the 3-meter, fellow junior Kayla Wofford took fifth with a 245.50.

Air Force will return to the pool Wednesday, Dec. 19, as they head to California for a dual against MW rival San Diego State. Start time against the Aztecs is set for 11 a.m. MT.