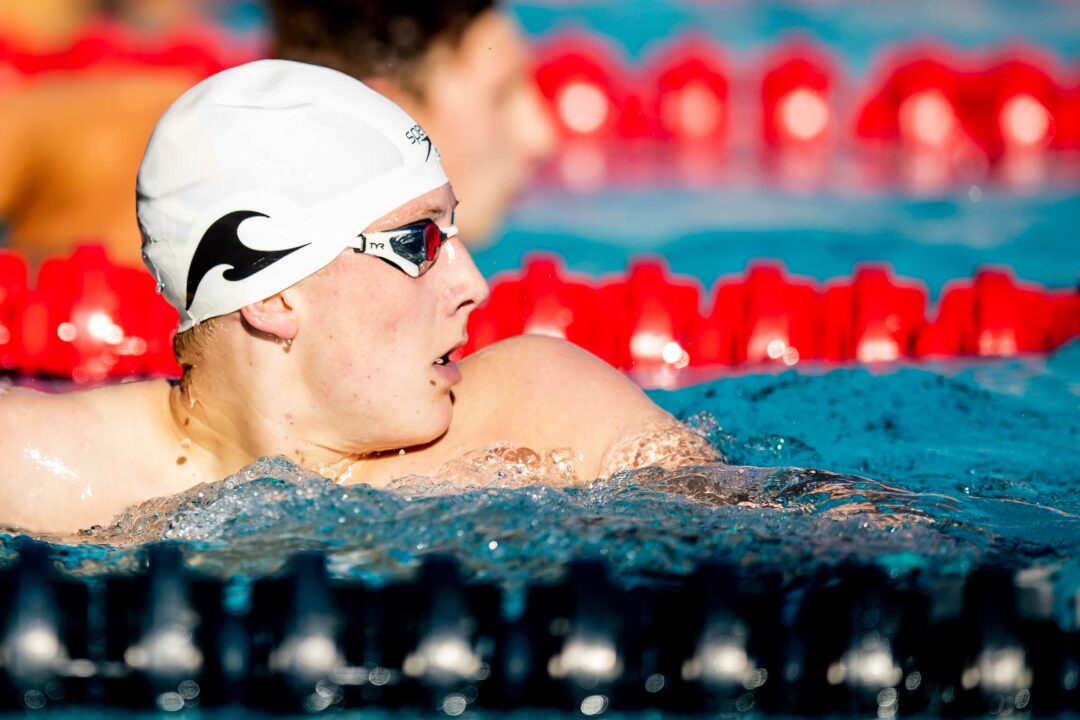 Enyeart was racing at the Speedo Summer Championships in Irvine, CA through Saturday night. Stock photo via Jack Spitser/Spitser Photography

Through the 2nd day of the 2021 NCSA Summer Championships in Huntsville, OLY has taken a slim lead in the combined team standings. NOVA of Virginia still holds the lead in the men’s standings, while Suburban Seahawks Club is still holding the women’s lead as well.

OLY also won the women’s 200 free relay, and had one of the top performances of the day. Josie Connelly, a 15-year-old, led off the OLY relay in 25.59, marking an enormous personal best. She entered the meet with a lifetime best time of 26.32, which was set in March of this year. With the swim, Connelly is now tied for 30th all-time in the 15-16 girls rankings. She’s also now ranked 13th all-time among 15-year-olds.

Alec Enyeart, a 17-year-old from Tsunami Swim Team of K.C. continues to impress. Enyeart was racing at the Speedo Summer Championships in Irvine, CA through Saturday night. Presumably either on Sunday or Monday, he then travelled to Huntsville to continue racing. Moreover, Enyeart dropped massive amounts of time in Irvine, and to this point at this meet, he’s swimming even faster.

Enyeart led off the Tsunami Swim Team men’s 800 free relay in 1:53.33. The swim marks a drop from his previous best of 1:53.71, which was set last Wednesday, exactly a week ago. This comes on the heels of Enyeart winning the men’s 800 free last night, dropping 2 seconds from his lifetime best, which was swum on Saturday night.

In the men’s 400 IM tonight, COR Swimming’s Giovanni Linscheer posted a 4:24.21 to win the race by 3.5 seconds. The swim was a personal best for Linscheer by 8.43 seconds. He made his move on the rest of the field during the breaststroke leg, where he split 1:14.75.

Linscheer was back in action in the men’s 800 free relay, where the COR squad of Trey Dickey, Levi Sandidge, Linscheer, and Harris Durham won with a final time of 7:37.35. The full splits are unavailable, however, the available splits appear to indicate that Linscheer’s leg was critical to COR building a lead against Tsunami Swim Team of K.C., who ultimately finished 2nd in 7:39.92.

Zionsville Swim Club 17-year-old Will Modglin won the men’s 100 back handily with a 55.62, touching first by just shy of 2 seconds. Modglin was just off his personal best of 55.04, which he swam in March of this year.

wednesday finals results are up: https://www.teamunify.com/recndncsa/UserFiles/Image/QuickUpload/wed-final-results_093588.pdf