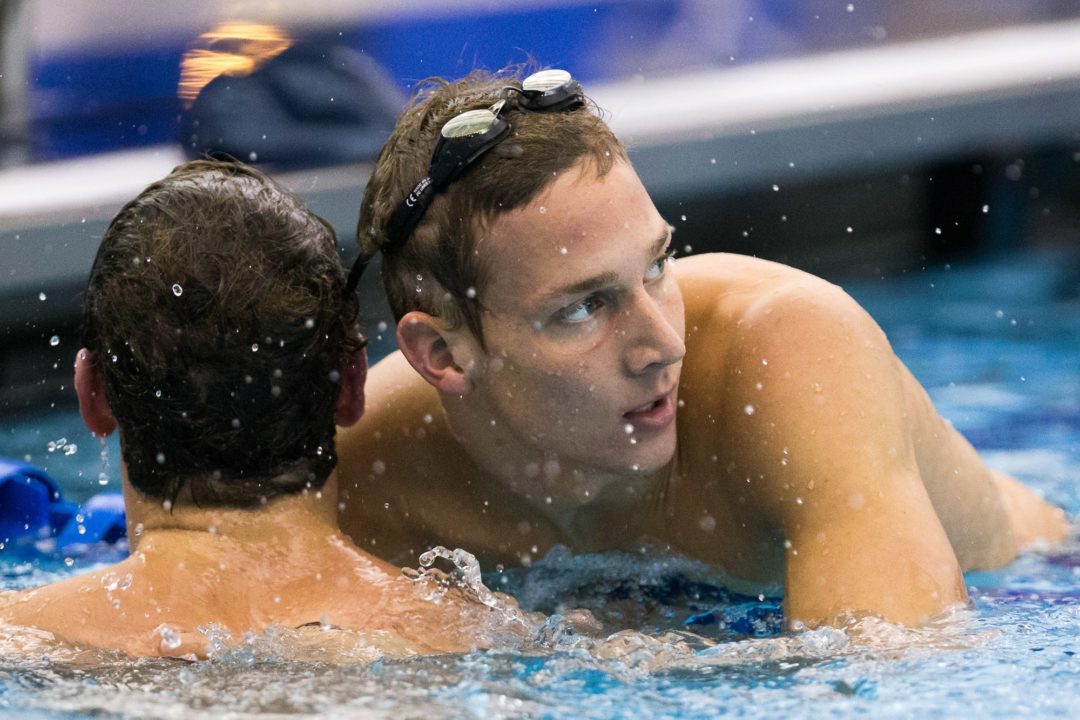 Caeleb Dressel sits atop the men's 50 freestyle with 18.77. Current photo via Tim Binning/TheSwimPictures.com

With the second round of fall invitational meets coming up this weekend, we at SwimSwam thought it would be helpful to give ours writers (and our readers) a handy at-a-glance chart of the top times in NCAA Division I swimming so far this season.  We’re gearing up for a big weekend of swimming, as there will be several major invitationals, as well as USA Winter Nationals, where NCAA competitors will be able to earn national championship cuts thanks to LCM conversions.

Notes: “A” cuts are noted in bold print.  An asterisk denotes a LCM conversion.  Times reflect the USA Swimming database as of the evening of Wednesday, December 2nd.

We already had to make one update to this chart this evening, as the Texas Hall of Fame Invite began this evening with the 800 free relay, and the Arizona women took advantage of this to post the best time in the NCAA so far this season, with their time of 7:01.50 supplanting the 7:04.24 the Stanford women swam two weeks ago.

Yet, the Stanford women still have the most nation-leading times so far this season, as they account for nine of the top marks, five individual and now four relays.  Stanford freshman Ella Eastin is currently the only woman in the nation with three top times, having set the pace in the 200 fly, 200 IM, and 400 IM.

The top times are a little more spread out among the men.  Florida leads the way with five of the top times, but Alabama, Louisville, Missouri, and Tennessee all have at least three of the top times, and NC State also has one.  Tennessee sophomore Evan Pinion has the fastest times in the country in the 500, 1000, and 1650.  If you want to throw out the 1000 because it is not an event at national championships, then Pinion is tied with Louisville senior Nolan Tesone and Florida sophomore Caeleb Dressel with two top times each.

Not really accurate results because so many teams haven’t had their rest meet competition yet!

Seems to me like he’s saying it’s “not really accurate” because no one from Cal is on the list.

It is very convenient that Li Zhesi now goes by Liz to cover up the fact that she tested positive for steroids, after she got a lot of heat on these boards last year. Very sneaky of you, OSU.

Cue the accusations of racism.

Watch out, got a social justice warrior here.

Bit of a logical jump to assume that a nickname is specifically to hide a positive test result. God forbid her team give her a nickname for any other reason.

Sven, I do not think that it is a logical jump considering that OSU does not list that she was an olympian and world champ on her bio. They only list that she competed last year. This is deliberately trying to hide the fact that she tested positive. I cant think of any olympian or medalist that does not have it mentioned in their bio.

The one inaccurate thing that I can see is that for the guy’s list, it says “SCHOL” instead of “SCHOOL”.

Figures. I managed to spell “Schwingenschlogl” correctly, but not “school.” Fixed, thanks.