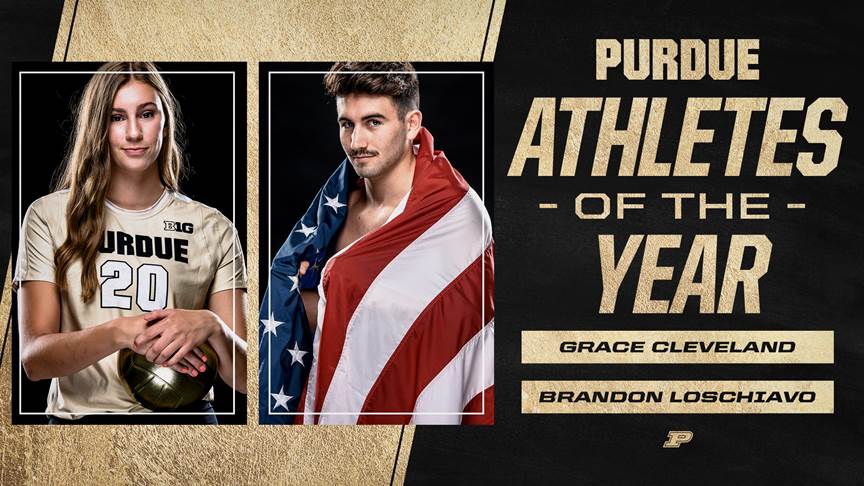 WEST LAFAYETTE, Ind. (PurdueSports.com) – As first-team All-America performers for program’s that finished among the top 20 nationally, NCAA diving champion Brandon Loschiavo and volleyball standout Grace Cleveland have been chosen as Purdue’s Athletes of the Year for the 2020-21 school year. They were selected by a vote of athletics department administrators from a pool of candidates made up of each sport’s most valuable player or similar designee.

Before qualifying for the Olympic Games with Team USA, Loschiavo became the fourth Purdue diver to win an NCAA title. He was victorious on 10-meter at the Big Ten Championships, NCAA Championships and U.S. Olympic Team Trials this year. Along with winning the Boilermakers’ 13th overall NCAA diving title since 2009, Loschiavo was a Big Ten Distinguished Scholar, CSCAA Scholar All-American and the department’s male recipient of the Big Ten Medal of Honor.

Cleveland earned All-America accolades for the second year in a row, moving up to an AVCA first-team honoree this year. Purdue volleyball was 14-5 with Cleveland in the lineup, earning the No. 7 seed in the NCAA Tournament and reaching the Regional Finals before running into eventual national champion Kentucky. As just the sixth first-team All-American in program history, Cleveland’s consistency and efficiency on the court led the team to its highest final national ranking in program history (No. 7), capping off a season that saw six straight weeks among the top 10.

Not only did Cleveland top rank among the best in the Big Ten in blocks (6th), points (9th) and kills (10th) per set, the the two-time Academic All-Big Ten honoree was a national leader in blocks, ranking 16th in all of Division I. Cleveland averaged 4.05 points per set, with 15 double-digit kill matches. The outside hitter put on a clinic in the pair of victories at No. 9 Ohio State and was one dig shy of the coveted triple double in Purdue’s win at No. 10 Penn State, where she posted 11 kills, a career-best 10 blocks and nine digs.

Loschiavo enjoyed a pair of historic finishes on the tower prior to his Olympic dream became a reality in June. He was victorious at the Big Ten Championships for the third time, becoming just the fourth men’s diver to win the event three times since platform diving was added to the meet in 1988. A month later at the national championship meet, he teamed with Ben Bramley for a 1-2 finish on 10-meter. It was the first 1-2 showing by any university in any men’s diving event since Auburn also did it on platform in 2005. Together they helped the Boilermakers place 17th at the NCAA Championships.

Loschiavo is the fifth Purdue Athlete of the Year honoree to also be an Olympian, all since 2009. A Boilermaker will represent Team USA on 10-meter for the fourth consecutive Olympic Games dating back to 2008. Devynne Charlton and Chukwuebuka Enekwechi will also make their Olympic debuts this this year after helping to give track & field a streak of six consecutive years with a Purdue Athlete of the Year winner from 2013 to 2018.

Cleveland joins Ariel Turner (2012) and Sherridan Atkinson (2019) as outside hitters to win Athlete of the Year over the last decade. Prior to the 2011-12 school year, only two volleyball players had been recognized – Purdue Hall of Famers Jane Neff (1983) and Marianne Smith (1986).

POOL HAS PRODUCED THE MOST ATHLETES OF THE YEAR SINCE 2005
• Swimming & diving has accounted for 11 Athletes of the Year since 2005, most of any sport during that span. Divers have claimed nine of the 11 honors, including a combined five by David Boudia (2009-11) and Steele Johnson (2015, 2018).
• Divers have won seven Athlete of the Year awards since 2009, with Casey Matthews (2013), Boudia and Johnson also being recognized after winning an NCAA title. A diver had not been selected as an Athlete of the Year prior to Carrie McCambridge in 2005. Boudia, McCambridge and Matthews are also Purdue Hall of Famers.