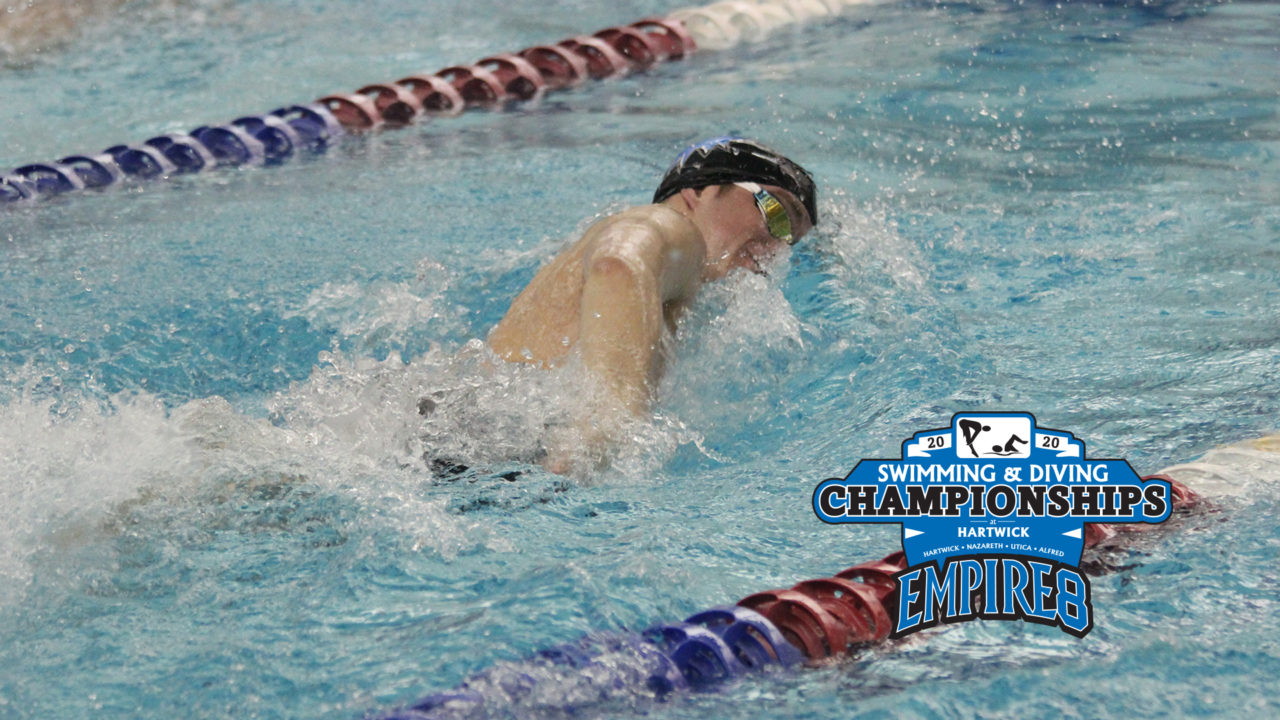 Nazareth College continues to lead for both the men and women after the Thursday’s action at the 2020 Empire 8 and Allegheny Empire Championships. Current photo via Empire 8 Athletics

Nazareth College holds the lead after Thursday’s action at the 2020 Empire 8 and Allegheny Empire Women’s Swimming and Diving Championships, held at the Webster Aquatic Center and hosted by Hartwick College. The Golden Flyers expanded their lead to 137.5 points over second-place Hartwick after two days. The Golden Flyers have 585 points, while Hartwick has 447.5. Alfred is third with 285.5 points, while Utica is fourth with 186. Nazareth, Hartwick and Alfred hold the top three spots in the 10-team Allegheny Empire Championships.

Nazareth’s 200-yard freestyle relay team of Taylor Robey, Abbie Santos, Darby McNamara and Paige Pasquarella opened the evening with a victory by just under two seconds in 1:36.07. Hartwick’s Cecelia Mowrey was the E8 Champion in the 400-yard individual medley. Abbie Santos won an individual event for the second consecutive evening, with a tremendous performance in the 100-yard butterfly. She completed the event in 57 seconds, as sister Kaela Santos finished second overall.

In what was the most thrilling finish of the night, Hartwick’s Abby Miller made up nearly three seconds over the final 50 yards to earn the win in the 200-yard freestyle by two tenths of a second in a time of 1:56.66. Hartwick’s 400-yard medley relay team of Channing Lewis, Gina Grauer, Tori Argentieri and Olivia Bart earned the win in a time of 3:55.87.

Nazareth’s Allie Norwood won the 1-meter diving event for the second straight season, finishing nine points ahead of teammate Taylor Woltz, the 2018 champion with a score of 438.45.

Action continues on Friday with day three events from the Webster Aquatic Center, with preliminary action starting at 10 a.m. and the finals getting underway at 5:30 p.m.

Nazareth College continues to lead after the Thursday’s action at the 2020 Empire 8 and Allegheny Empire Men’s Swimming and Diving Championships, held at the Webster Aquatic Center and hosted by Hartwick College. The Golden Flyers won all five men’s events on Thursday night to expand its lead with 565 points after the first two days. Hartwick is second with 450 points, while Alfred is third with 366 points and Utica is fourth with 157. The Golden Flyers continue to lead the 10-team Allegheny Empire Championship with 840 points, while Hartwick is second overall.

Nazareth’s 200-yard freestyle relay team of Tom Griffin, Mark Dunkelberg, Sean Payrot and Matt Corona opened the evening by finishing 1.53 seconds over the rest of the field in 1:24.03. Nazareth junior John Koch won his second individual event in two nights, rolling to a seven-second win in the 400-yard individual medley in 4:08.11. Luca Biagiotti just out-touched Hartwick’s Dawson Tupponce to win the 100-yard butterfly by 21 hundredths of a second.

Freshman Dylan Long of Nazareth also won his second Empire 8 crown in two days, taking the 200-yard freestyle. Nazareth’s 400-yard medley relay team of Tom Griffin, Koch, Biagiotti and Matt Corona finished the evening by hanging on to defeat Hartwick by just three tenths of a second in a time of 3:26.07.

Action continues on Friday with day three events from the Webster Aquatic Center, with preliminary action starting at 10 a.m. and the finals getting underway at 5:30 p.m.