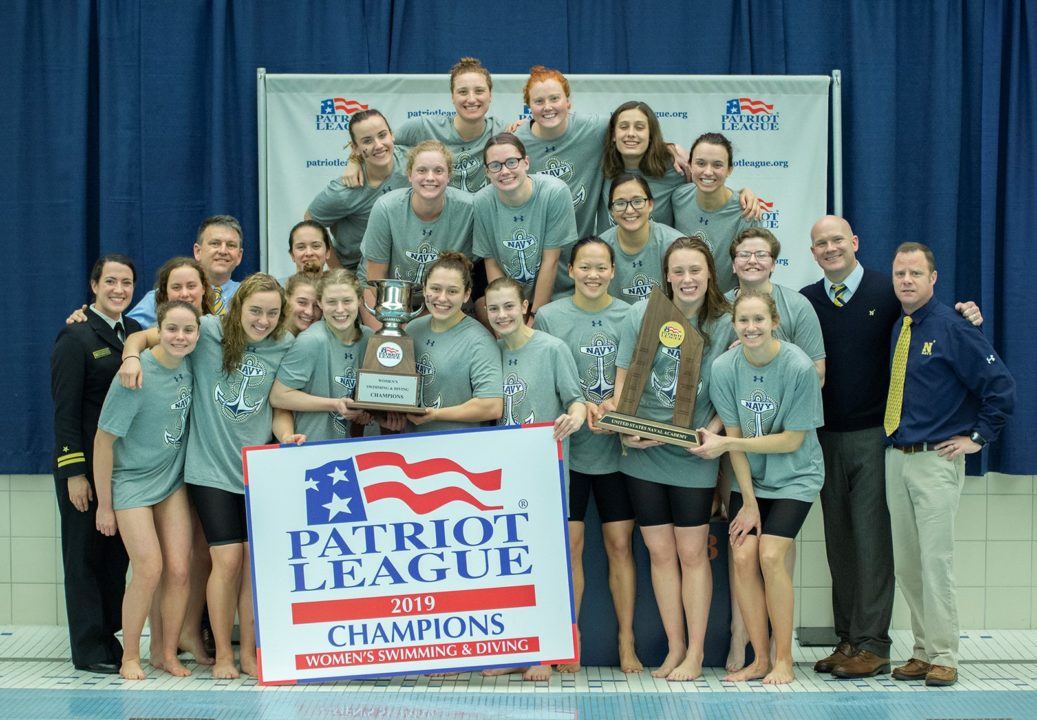 The Navy women are now tied for the most Patriot League titles in any sport, and they did it with arguably the most dominant performance in meet history. Current photo via Navy Athletics

Another year, but the same refrain in the Patriot League: the Navy Midshipmen finished the 2019 championship with dominant team performances, with the women coming away with an 8th-straight title and the men a 16th-straight.

Navy woman Lauren Barber finished her conference career as the most decorated Patriot League student-athlete in any sport in League history, ending her career with a perfect 28-for-28 in conference championships, including 12 individual titles; and was name the Patriot League Swimmer of the Year for the 3rd-straight season (after Rookie of the Year as a freshman).

The Navy women ran away with their 8th-straight title, scoring 941 points and winning by 455. Not only is that the highest margin of victory in the women’s meet in Patriot League history, but it’s also the 2nd-highest point total in league history, behind only Navy’s 2016 team, which scored 958.5 points.

The final day of competition was led by Navy’s star senior and freshman duo, Lauren Barber and Martina Thomas, who each came away with their 3rd individual wins of the meet. Thomas went first, winning the 100 free in 49.74, just .37 seconds ahead of Lehigh’s Ann Foley (50.11), who was the 50 champion earlier in the meet. After winning by 2.6 and 3.5 seconds, respectively, in the 200 and 500, that was the closest competition that Thomas got in the meet.

In the next women’s event of the meet, Lauren Barber swam a 2:11.22 to win the 200 breaststroke running away: her 4th-straight title in the event. That also broke the Pool Record.

The Midshipmen’s only hole of the day came in the mile, where Bucknell freshman Maddie Hartigan won in 16:44.99, beating out Navy’s Erin Scudder (16:49.58) for the win.

The story of the final day of the Patriot League Championships was the same story as most of the meet: the Army and Navy men split the blue ribbons, but Navy’s men had big depth that cemented (and extended) their lead over Army – though only by about 40 points on Saturday, with no men’s diving on the books.

Navy sophomore Luke Johnson opened the session with a win in the mile in 14:58.95. That makes him just the 2nd swimmer in league history to break 15 minutes, and left him a fingernail shy of Erik Hunter’s league record of 14:58.72.

The Freshman of the Meet Caleb Mauldin won the next event, the 200 backstroke, in 1:43.86. That was part of a Navy 1-2-3 with Billy Cadigan and Dominick Wallace that went 1-2-3 in the race. The top 6 finishers (including all 3 Navy swimmers) were freshmen or sophomores.

Army made it two-straight thanks to a dominant win by freshman Evan Zhang in the 200 breaststroke. He won in 1:55.65, nearly 2 seconds clear of the hoard of Navy swimmers chasing him: the Midshipmen finished 2nd-5th in the race.