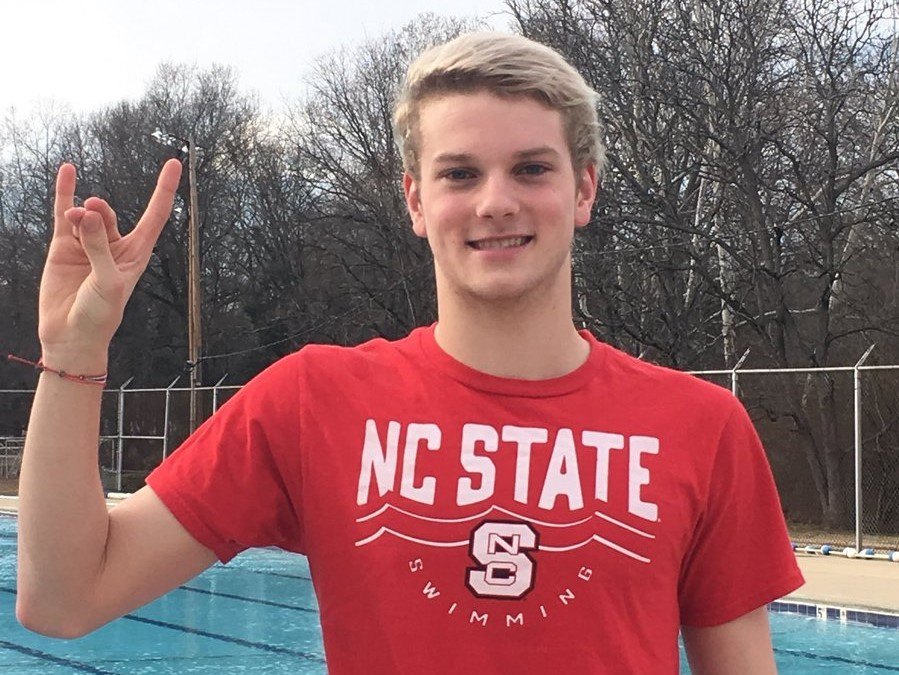 Ross Dant, who swims for Hickory Foundation YMCA Seahorse Swim Team in Hickory, North Carolina, will remain in-state for his collegiate career with the Wolfpack, he announced via Twitter. Current photo via Ross Dant (Twitter)

Hickory, North Carolina-native Ross Dant has given The Wolfpack their second in-state verbal commitment to the class of 2023. He follows Noah Henderson, who announced his intention to swim for North Carolina State University earlier this month. Dant took to social media to announce:

Dant swims for Hickory Foundation YMCA Seahorse Swim Team. One of the top distance freestylers in his cohort, he was named to the 2017-18 USA Swimming National Junior Team for his performance in the 800m free (8:02.90) at U.S. Nationals.

NC State has been known as more of a sprint program, but Anton Ipsen and Adam Linker went 2-3 in the 1650 free at the 2017 ACC Conference Championships, and Dant’s best mile time would have put him in fourth just behind them. Ipsen then went on to place 7th in the 1650 at NCAAs, while Linker finished 11th. Dant’s top time would have been 19th. His best 500 time would have landed him in the B final at ACCs, just 4/10 out of the A final.

noah henderson & ross dant, shaping up to be an excellent class for nc state.

Huge pickup for State, for no other reason that they needed to come out in the positive with the big 3 of Henderson, Dant and Walker in NC this year. Great to see them keeping the momentum going with DeSorbo leaving!

That was my point. They needed to come out on the positive side with those 3. Getting 2 of the 3 accomplishes that!

State loses a ton in ‘19, quality and quantity (lose more quality in ‘18)! This class will be critical for them. Paired with this year’s very strong freshman class (quality and quantity) and the ‘18 class with some studs but not much depth, this ‘19 class will go a long way in keeping them elite.

Ross had to pick state!! No other choice!
As a State alum, I know Gary will make him into a superstar!

Ross was in Tennessee for Juniors.