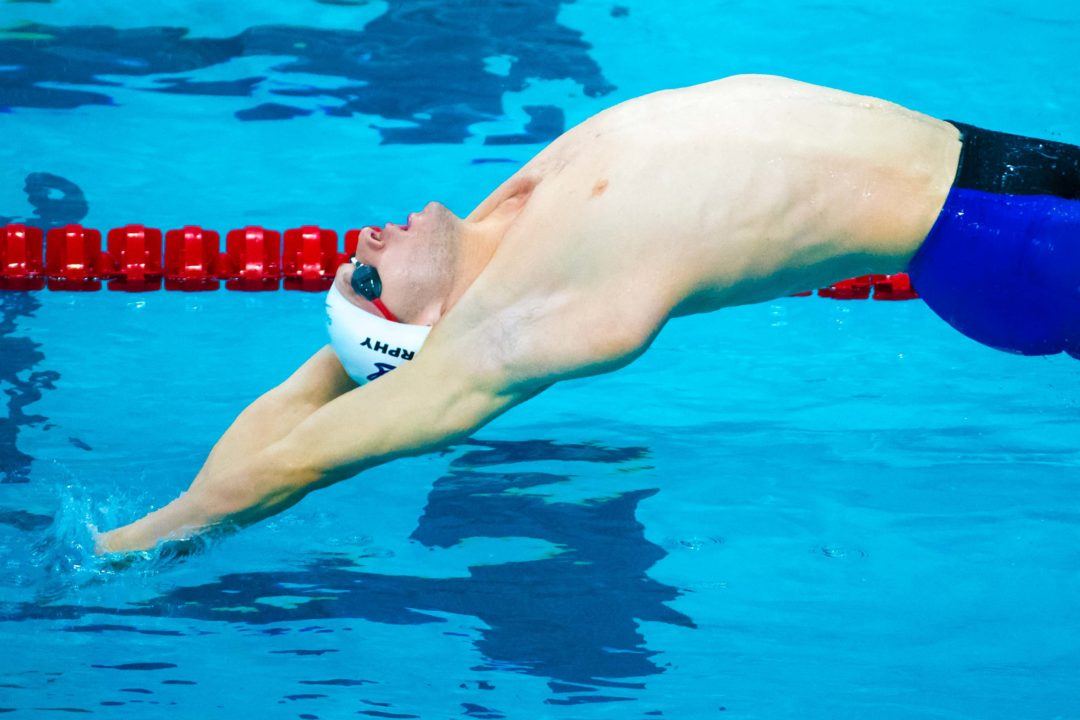 Ryan Murphy lowered his own meet record in the men's 200 back on day 2 of the Speedo Grand Challenge. Archive photo via Mike Lewis/Ola Vista Photography

After duelling for the 200 freestyle crown on night 1 of the 2018 Speedo Grand Challenge, California teammates Ryan Murphy and Andrew Seliskar each lowered a meet record at day 2 finals in Irvine. Seliskar, who won that 200 free race on Friday, took down his own meet record in the 100 fly, while Murphy lowered the mark in the 200 back.

Three of the six fastest men in the world this year went to battle in the 200 back, with Murphy taking on teammate Jacob Pebley and Japan’s Ryosuke Irie, who is currently training at Team Elite. Murphy led from the start, fending off a late charge from Irie to clock 1:55.70, breaking his 2015 meet record of 1:57.20. Irie closed like a freight train in 28.58, touching in 1:56.23, with Pebley back for 3rd in 1:57.68. Both Murphy and Irie were just off their season best times which rank them 3rd and 6th in the world, while Pebley sits 4th.

The women’s 100 fly saw an exciting four-way battle, with Farida Osman blasting out to an early lead in 27.18 before Hellen Moffitt, Louise Hansson and Katie McLaughlin attacked coming back. McLaughlin came home the quickest, but it was Moffitt who got her hand on the wall first in 58.78, just a few hundredths ahead of Hansson (58.82). McLaughlin was 3rd in 59.02, while Osman faded back to 4th in 59.38. McLaughlin’s swim makes her the 7th fastest American this year (Moffitt is currently 4th with her 58.59).

In the final event of the night, open water ace Jordan Wilimovsky pulled away from Cal’s Nick Norman on the back half of the 400 free to win in 3:51.48, just a second off his lifetime best. He is now the 2nd fastest American this year behind only Zane Grothe, as he takes down his season best by three full seconds. Norman, who brought his PB down this morning in 3:55.05, got it down a bit more for 2nd place in 3:54.93.

Seliskar is good at many events, but maybe needs a “specialty” like Murphy has in the backstroke.

Murphy looking like he was in the run up to Rio. Perhaps even a tad better over 200m

The first paragraph needs a correction. Seliskar won the 200 free, not Murphy.

Why do you mention August as a target for Claire Tuggle? If you mean PamPac then Claire has to make 1:57 in July to get on the team. It is 2 sec drop in personal best in less than two months. Even if to assume that it was improvement in this event since April (she was 1.5 sec slower her pb) then it was insignificant. Not more than half of a second.

I am afraid Ervin won’t even qualify for Tokyo …too much depth in Usa right now in the sprint events .

Nothing to be afraid of. A unique and legendary career!

Ledecky’s 400 free from Indianapolis would have gotten her third place in the men’s race tonight.

Meh, he didn’t suit up anyway (of course) – he’ll be back

At 37 you only get a handful of meets where you get to lay down full speed. I don’t think he will make the team this time around, but damn if he’s not going make it hard for those youngsters trying to grab that second spot.

I want to see the young talent get the spotlight. He has had his day..

regardless of age I want to see the fastest two qualify and if Ervin pushes them to go faster or even better, he qualifies, all the better.

agreed , there is a time for everything in life .

that is the nature of competition in general, yes