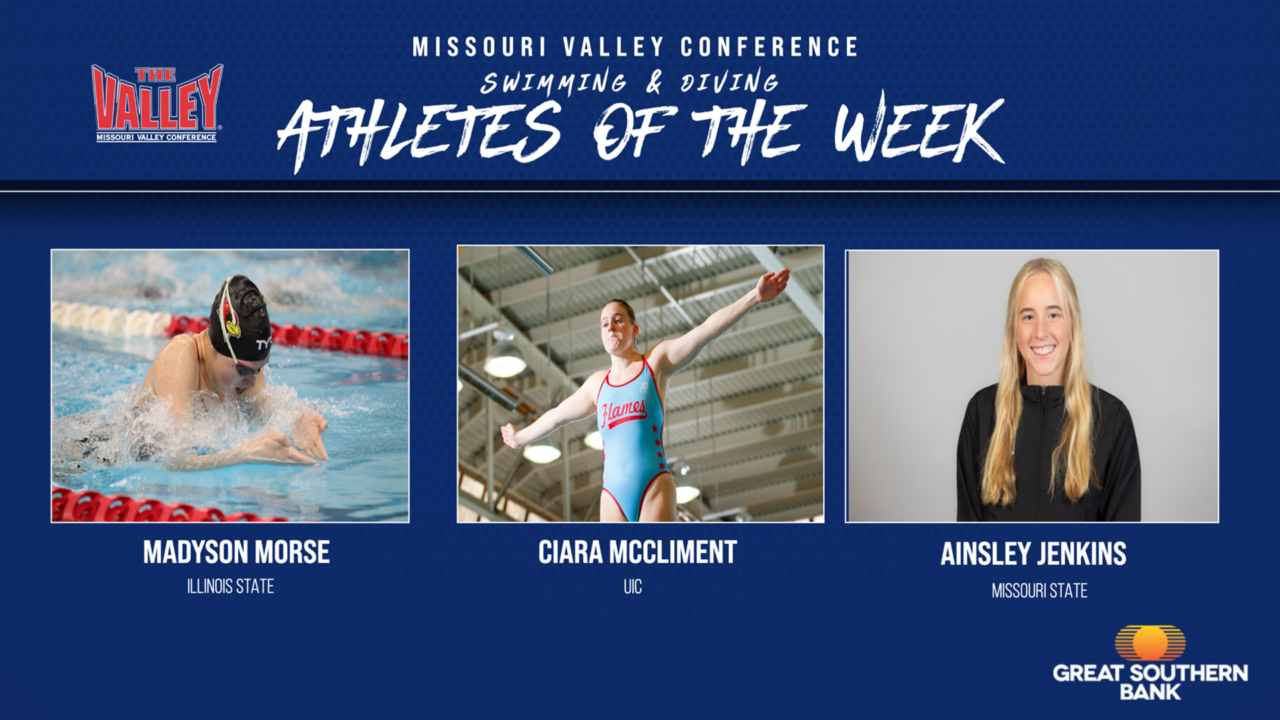 Madyson Morse of Illinois State, Ciara McCliment of UIC, and Ainsley Jenkins of Missouri State were named MVC Swimmer, Diver and Freshman of the Week. Current photo via MVC Sports

Madyson Morse, Sr., Illinois State
Morse posted a stellar showing for Illinois State at the Purdue Invitational last week as she broke the school’s 100-yard Breaststroke record twice in the same day. Morse recorded a time of 1:01.90 in the prelims Wednesday morning to break Jensen Keck’s 2017 mark of 1:02.32. Later in the day she bested the school record yet again as she improved to a 1:01.70, which ranks second in the MVC this season, and finished seventh in the A-final of the 100-yard breaststroke. She also swam the first leg of Illinois State’s 200-yard freestyle relay as the Redbirds set a new school mark of 1:33.71 in that event.

Ciara McCliment, So., UIC
McCliment was the 1-meter champion at the House of Champions invitational, and she had the highest score in the 3-meter event.  Her score of 255.35 in the 1-meter final round was tops in a 20-diver field from eight schools.  In the 3-meter prelims, one bad dive kept her in the consolation final, but once there she scored 289.20.  That score bested the NCAA Zone standard and was nearly 12 points higher than any diver in either the consolation or main final round.  She has had the highest 3-meter score in every meet this fall, to go along with two wins on the 1-meter board.

Ainsley Jenkins, Fr., Missouri State
In the 200-yard freestyle finals of last week’s Purdue Invitational, Jenkins notched a career-best time of 1:51.99, smashing her preliminary mark by nearly two entire seconds (1:53.88). Her time currently sits as eight fastest in the MVC. In addition, Jenkins recorded a time of 5:00.59 in the 500-yard freestyle finals, a mark currently ranked 10th in the conference.