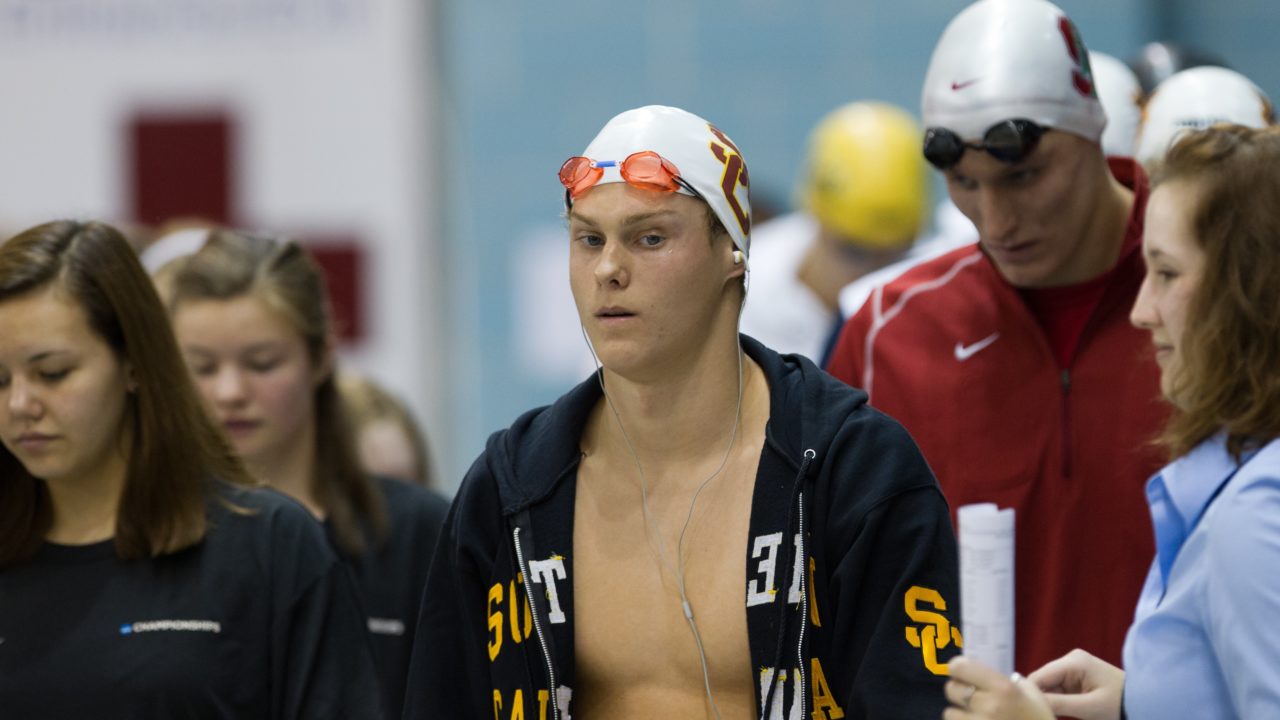 American-trained Vlad Morozov, who has lived in the US since he was in high school, nailed down his Olympic selection on day 2 at the 2012 Russian Olympic Trials.

But it wasn’t in the race you’d guess. Morozov took 2nd in the 100 back in 53.93, which clear the FINA Automatic Qualifying Standard and, pending confirmation, should put him on the 2012 London Olympic Team.

He placed only .02 behind another American-trained swimmer Arkady Vyatchanin, who was the winner in 53.91.That’s a monster-of-a-time for him; he was very good in this race earlier in his career (even in 2006 and 2007 before the rubber suits), but hasn’t been even close to this fast since 2009. The backstroke-skills of Gregg Troy and the Gator Swim Club seems to be paying-off again.

Morozov was out very fast as a sprinter, but Vyatchanin closed very well for the win. It would be great to see Morozov try for the 100 IM at this winter’s Short Course World Championships, or maybe even the 200 at some point; he’s demonstrated that he’s outstanding in all four strokes over 100 yards, and his 200 free has gotten pretty decent as well.

Stanislav Donets wasn’t able to kick his speed into high-gear in the later rounds, and finished 5th in only 55.16. He’ll now be relying solely on the 200 back for his qualification, but he’s going to have to be way faster than this to even make the A-standard, let alone better Vyatchanin and whoeve else is in front of him.

In the men’s 100 fly, Evgeny Korotyshkin won a heated battle in 52.07, which moves him into a three-way tie for 6th in the world this year. But the victory was not easily-won, as shortly behind him was Nikolay Skvortsov in 52.08 and Nikita Konovalov in 52.15.

That will send Skvortsov and Korotyshkin through to the Olympics, and leave Konovalov disappointingly out for now. His time of 51.99 from the semi-finals was the fastest of the meet, but it is the winners in the finals who get the right to the Olympic spots.

Another Olympic spot went to Alexander Tikhonov, who won the 400 IM in a 4:15.24. He looked far better in this race than we’ve seen him since the 2010 European Championships, and that’s a best time for him. More examples of Olympic bringing unexpected results.

Other winners on the day included Veronika Popova in 55.15 in the women’s 100 freestyle. That’s well off of her best, and just misses the FINA automatic qualifying time. I would be shocked if the Russians didn’t find a way for their National Record holder to earn her way onto the team.

Fight on, Vlad!! The trojan family is behind you in your journey!

Vlad Morozov wanted to swim for USA. Is it always the case? I think Russia will disagree. Perhaps it will be a little cold war. However, a russian guy who wants to swim for USA it’s a great story. He was clearly not tapered at the NCAA championships and now he is. After his big time in the 100 back we can predict a sub 22 in the 50 free and a 48.50 in the 100 free.