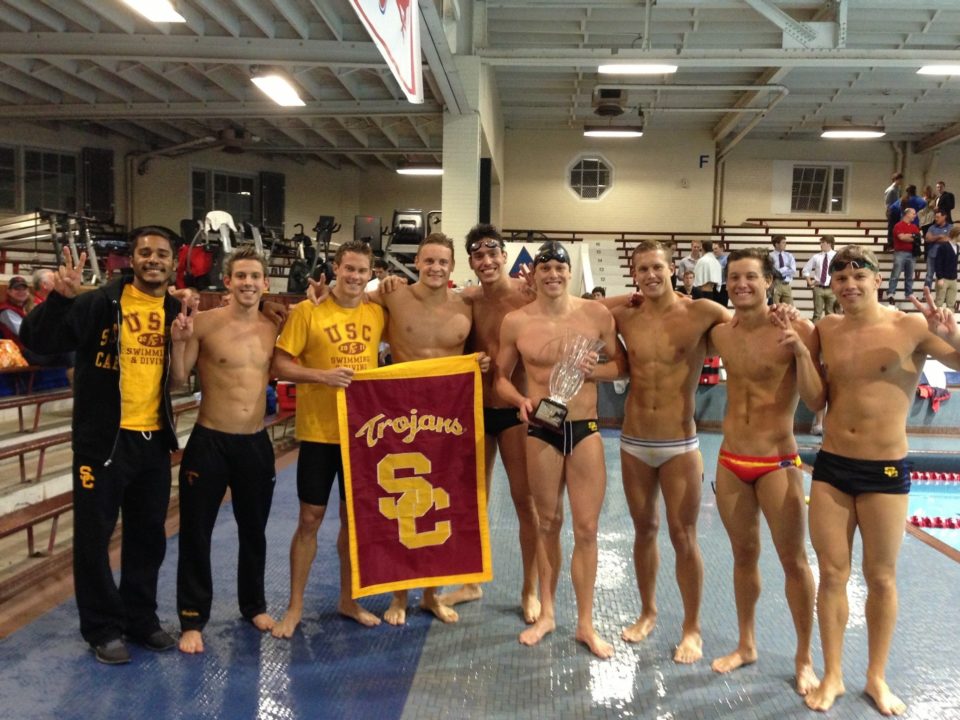 The USC men came from behind to win the 2013 SMU Classic.

The SMU Classic was again the ‘Vlad Morozov’ show on day 2, though just like the meet’s first day, Michigan overcame a great split by the Russian to win the session-opening relay.

With a great front-half from the Ortiz brothers, Michigan held off even an 18.66 anchor from Vlad to take the win in 1:26.48 to USC’s 1:26.63. That’s a Michigan relay that got a good anchor from Sean Fletcher (19.75) but was without their top sprinter Zach Turk for this meet, who could’ve stretched out that victory.

Even a sweep of the medley relays, though, couldn’t give Michigan a meet victory. The Wolverines won a lot of B-Finals in this meet, and half of the relays, but the bonus points given for a lot of USC event victories (A-final scoring went 16-13-12) tilted the scales in the Trojans’ favor by three small points.

That was the last time that Morozov would be touched in this meet. He won the individual 100 free in 41.70, which broke his own pool and meet records from last year’s meet and is easily the best time in the country this year. That time is also faster than the winning time from last year’s NCAA Championships meet, meaning Morozov’s goal now is just to hit something similar in Indianapolis and it’s likely an NCAA Championship in his pocket: something he still has not earned in two years of college thus far.

Morozov’s final swim of the meet would be a 19.21 to lead off the 200 free relay. Thanks to the contributions of his teammate Jack Wagner, who’s been having a great year in sprinting himself, USC won the race in 1:19.08. That’s their best time of the season (the improvement thanks largely to Morozov’s return).  Michigan took 2nd in 1:19.57, including a 19.66 anchor from Miguel Ortiz.

Other winners on the day included Florida’s Sebastien Rousseau in the 200 fly which became a battle of the South Africans. Rousseau, a 22-year old redshirt junior, held off his freshman countrymate Dylan Bosch 1:43.45-1:44.58. That’s not a season-best for either man, but two swimmers who sit in the top 5 in the country collegiately this year were both within a second of their season-bests on Saturday. Florida’s Marcin Cieslak won the B-Final of that race in 1:45.81.

Florida’s Matt Elliott’s win in the 200 breast (1:55.97) over Michigan’s Richard Funk (1:56.66) gave Florida three individual wins on the second day of the meet. The other swimming victory went to USC’s Alex Lendrum in the 200 back in 1:44.03, which was his best swim of this meet. That’s about what Lendrum swam at the SMU Classic in 2012, though he’ll hope for a better end to his season this year.

SMU’s Devin Burnett (334.75) won the 3-meter diving, but that wasn’t enough to pull the Mustangs out of last place in their own meet.

41.70 at that pool. In January?! Is he Chinese? I know he SWAM for Russia, but that doesn’t mean anything. Right, John?

Vlad is just a superfreak. He’s superfreaky Rick James style. Perfect technique in all the strokes. Soon we’ll be debating him versus The Rocket on who has the most perfect strokes.

The Rocket? Who would be the Rocket??

I would assume he means the Russian Rocket, the great Alexander Popov

Or did he confused thorpe Thorpedo with rocket???

The only swimmer I recalled who were called the Rocket is James Roberts, who for me is just a big fluke until now..

The only Rocket is Popov.

You’ve got your Popov’s mixed up.