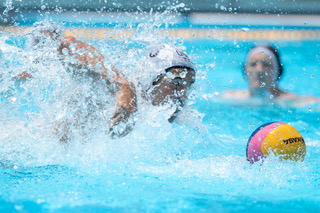 The 12 Olympic teams are selected through a combination of various events. The host nation gets an automatic bid. The winners of the 2019 World League earn a berth. The top two teams from the 2019 World Championships qualify, and then five world regions select a representative, some through a regional competition like Pan Ams, the Asian Games, or the European Championships, and others through a different selection process.

Those 9 nations had already been selected, leaving three spots open for this week’s World Qualification Tournament.

Still considered the “2020 World Qualifier,” the men’s tournament actually took place in February of 2021. A field of 12 battled for the final three qualifying spots.

With three teams making the cut, the tournament essentially came down to two semifinal thrillers, plus a bronze-medal match.

This one was arguably the thriller of the tournament. Croatia surged late in the match with four consecutive goals to take a 9-8 lead. But Montenegro roared back to tie the match with just 24 seconds remaining.

Things went into a penalty shootout, with Montenegro picking up a 4-2 win on a game-ender by Drasko Brguljan. That sealed an Olympic berth for Montenegro, while Croatia was sent to the bronze medal match needing a win to make the Olympics.

Greece punched its Olympic ticket on an emphatic 5-goal performance from Angelos Vlachopoulos. It was a pure offensive blitz, as Vlachopoulos took 12 shots himself and Greece outshot Russia 36-30.

That sent Russia to the last-chance qualifying bronze medal match against Croatia, while Greece officially joined the Olympic ranks.

With both teams already locked into the Olympics, the gold medal match went back and forth, with Montenegro ultimately outscoring Greece 4-1 in the final quarter to seal a narrow 10-9 win.

There was one more thriller yet in this tournament in the final round. With an Olympic berth on the line, Croatia went into its second-straight penalty shootout, this time a 14-13 marathon.