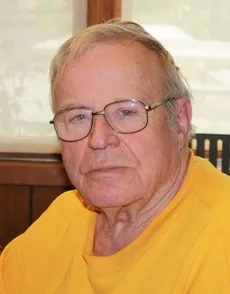 McKinnon, who grew up in Oakland and swam for his father Gus, a UC Berkeley assistant swim coach and YMCA club coach, was a high school YMCA All-American who brought California-style competitive swimming to Montana when he was awarded a full-ride scholarship to the University of Montana. While working as a junior and high school English teacher in Great Falls, Montana, McKinnon coached the Elks Y Swim Club, the Great Falls Swim Team, and, finally, Gus’s Guppies, which was taken from the nickname for his father’s team at Berkeley. Additionally, McKinnon was also as a Master’s Swimmer for decades, making him a six-decade champion for Montana swimming. Before being diagnosed with cancer in April, he was training for the National Senior Olympics, swimming two thousand yards a day at 84 years old.

In 1971, Bob and his wife Suzy, also a Montana Master’s swimmer, designed and built their own backyard swimming pool and started a successful swimming instruction program that lasted forty-eight years, essentially saving many lives and instilling water skills and confidence in over 7000 children. They never had to advertise and had such loyal customers that McKinnon sometimes taught three generations in the same family. The program came to a stop because of COVID-19.

From the backyard pool, they also started Gus’s Guppies, a club team, that won several state championships in the 1980s, developed many high school and college swimmers, and initiated eventual careers for many swim instructors and swim coaches. Along with the Guppies, Bob coached the boys’ and girls’ swims teams at both CM Russell High School and Great Falls High School for many years, winning several state championships. His swimmers were inspired by his incomparable coaching, but also by his own ongoing competitive swimming in master’s meets, where he represented Great Falls well and set many records that still exist.

Montana swimming has lost one of its greatest champions.