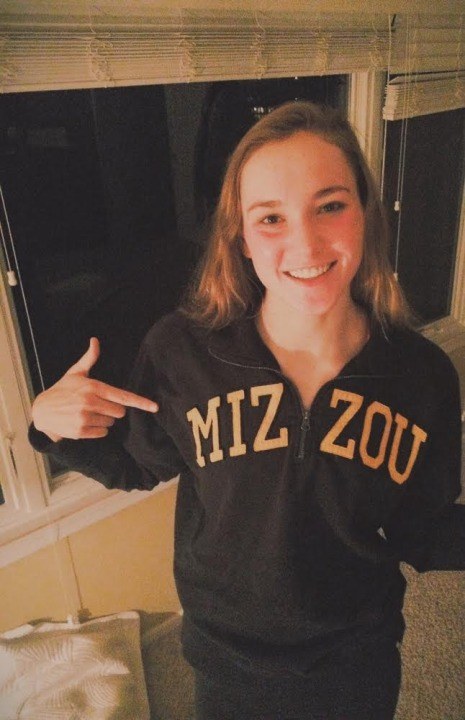 The backstroke/freestyle sprinter and Iowa State Record Holder has verbally committed to the University of Missouri.

The University of Missouri Tigers will be welcoming sprinter Maddie Gehrke to their roster for the 2015-2016 collegiate season. Gehrke swims for Central Iowa Aquatics, and has recently come off of a great junior year in the pool.

At the Iowa Girls High School Athletic Union State Championships this past weekend, Gehrke took home two wins for Waukee High School and took down two Iowa State records in the 50 Free (22.51) and 100 Back (54.83), qualifying as an All-American in the process. Gehrke’s 50 Free time already runs close to the NCAA B Cut, and would have placed in the top 16 at the 2014 SEC Championships. Her fastest 50 Free time would have also ranked 3rd in the Tigers’ list of top times for the 2013-2014 season.

Her sprinting prowess will clearly already make an impact for the Missouri Tigers, and will help sustain graduation losses. Gehrke will join backstroker Madison Bridges for her senior year at Mizzou. Bridges‘ time of 54.42 in the 100 Back ranks as Mizzou’s seventh fastest time ever, and she will be a great training teammate for Gehrke her freshman year. With Tiger senior sprinter and third-fastest 50 freestyler in school history Danielle Barbiea graduating this year, Gehrke will help to fill a sprint gap in the Missouri roster.

Congrats! Keep up the great work! My twins will we done but we will all be rooting for you and the MIZZOU team!! You will love your decision.