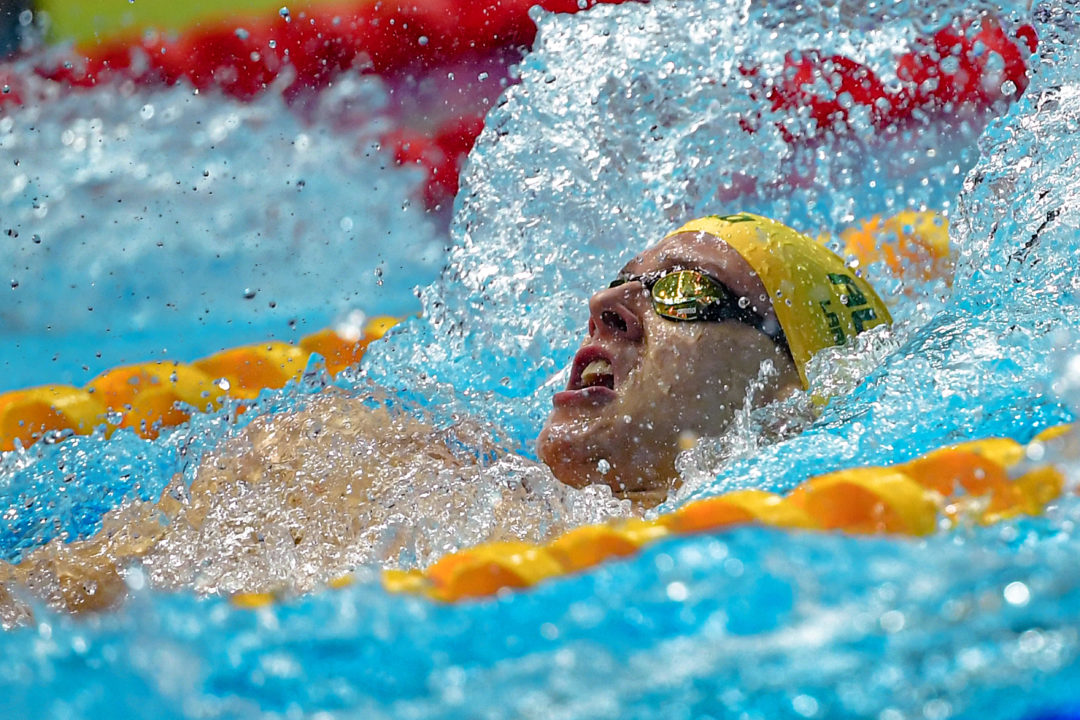 Mitch Larkin, the defending Olympic silver medalist in the 200 backstroke, has opted to race the 200 IM instead at next week's Olympic Trials. Archive photo via Gian Mattia D'Alberto - LaPresse

In a pre-Olympic Trials press conference, Australian Mitch Larkin says that he’s chosen the 200 IM ahead of the 200 backstroke for Tokyo.

Whether Larkin, 27, would focus on the backstrokes, where he has achieved most of his recent international accolades, or the IM, which was his specialty as a younger swimmer, has been one of the biggest ‘will he/won’t he’ decisions globally among elite swimmers headed into this Olympic season. He says he’s agonized over the choice, but ultimately decided his best chance was in the 200 IM.

“I have been hitting my head against the wall for a number of months trying to make that decision,” Larkin said from South Australia on Friday.

“I have never swum at an Olympic Games in a medley event, which gives me a lot of excitement.

He cited the absence of Michael Phelps, who retired in 2016 after winning 4 consecutive Olympic gold medals in the event dating back to 2004, as a major factor in his decision to go that direction.

The 200 IM is still a deep race internationally, especially with young U.S. talent like Carson Foster and Michael Andrew due for breakouts, the pathway to gold is a little clearer than the backstrokes, where the fastest swimmers ever like Ryan Murphy and Xu Xiayu and Kliment Kolesnikov and Evgeny Rylov are in their primes.

By comparison, in the 200 IM, the only two men under 1:55 are 36-year old Ryan Lochte and the retired Phelps. Lochte and the #4 performer ever Laszlo Cseh are both likely competing in their last Olympics without a ton of expectation of re-achieving their peaks. American Chase Kalisz has been inconsistent over the last 4 years.

“And also I looked at the depth in terms of who is going to win it, the 200 backstroke versus what time is going to medal in the 200 medley,” Larkin continued in describing his choice.” And I think that was the deciding factor.

“I have been doing the numbers and what it takes to swim that (medal) area and for me it’s just about executing a really good breaststroke coming off a really strong backstroke which is my strength.

“And I have got plenty of fitness in the tank so it’s not a matter of how fast I can come home, it’s just about executing the perfect race.”

Larkin won his only Olympic medals in the backstroke races: an individual silver in the 200 back in Rio in 2016 and a bronze as the leadoff leg of a 400 medley relay. He was also the 2015 World Champion in both the 100 and 200 backstrokes, and the 2014 and 2018 Commonwealth Games champion in the 200 backstroke. He swept the backstroke events at the 2018 Commonwealth Games, but also won the 200 IM – the events don’t conflict at that meet.

The choice comes in spite of a seemingly-growing confidence from Larkin in the 200 backstroke. In April, he swam 1:54 that ranked him at the time #2 in the world in the event and was his best swim since the Olympic silver medal performance.

But ultimately, he decided the 200 IM was the easier pathway to an Olympic podium.

Larkin will race the 100 backstroke prelims and finals on Sunday June 13 and the 200 IM on Wednesday, June 16. All sessions of the meet will be aired live globally on Amazon Prime.

This is a sh1tty decision to have to make. The schedule for this double should really be fixed in the future.

We’ve been told it will be available globally. Might not go up until closer to the session.

The easiest way to find it is to search for “australian swimming trials”.

Search for it under “Australian Swimming Trials” or look in upcoming sporting events, it’s showing up for me in the UK.

Oh great I should be able to do the free trial then, thank you.

What time do finals start?

Greenbank is happy to know that

How do you get amazon prime? Can you just sign up or do you have to have a subscription and pay for it?

If you have never signed up I think there’s a free trial. Go to Amazon.com to sign up

What country do you live in?

In the US, you can sign up for just Prime Video for 8.99/month. Or it’s included with your all-encompassing Amazon Prime membership for $13/month (or $119/year).

They also have free trials.

Right call imo. He isn’t beating Rylov in the 200bk and you have to go for gold. 200IM looks relatively open.

Hhmm, not sure its the right call but its his call to make him and he’s made it.

200Back is the safer medal bet but would agree gold is most likely out of reach. 200IM does have gold possibilities but it also needs to be recognised that he is most likely going to be just one in a rugby scrum of contenders … and if he’s NOT on his game, he may not even final. Whilst that may sound harsh; he’s proven most capable of both the sublime and the ridiculous, sometimes at the same meet.

I think he made the right choice. He’s already proved himself in the 200BK. The IM is where he first made his name so by choosing the 200IM he’s going back to his roots. It is deeper than the 200BK but there’s no one in the 200IM who really stands out so it offers a better chance of gold. If he wins the 200IM he goes down as a great all-rounder rather than just a backstroker.