Missy Franklin Can’t Afford to Struggle with Her Start 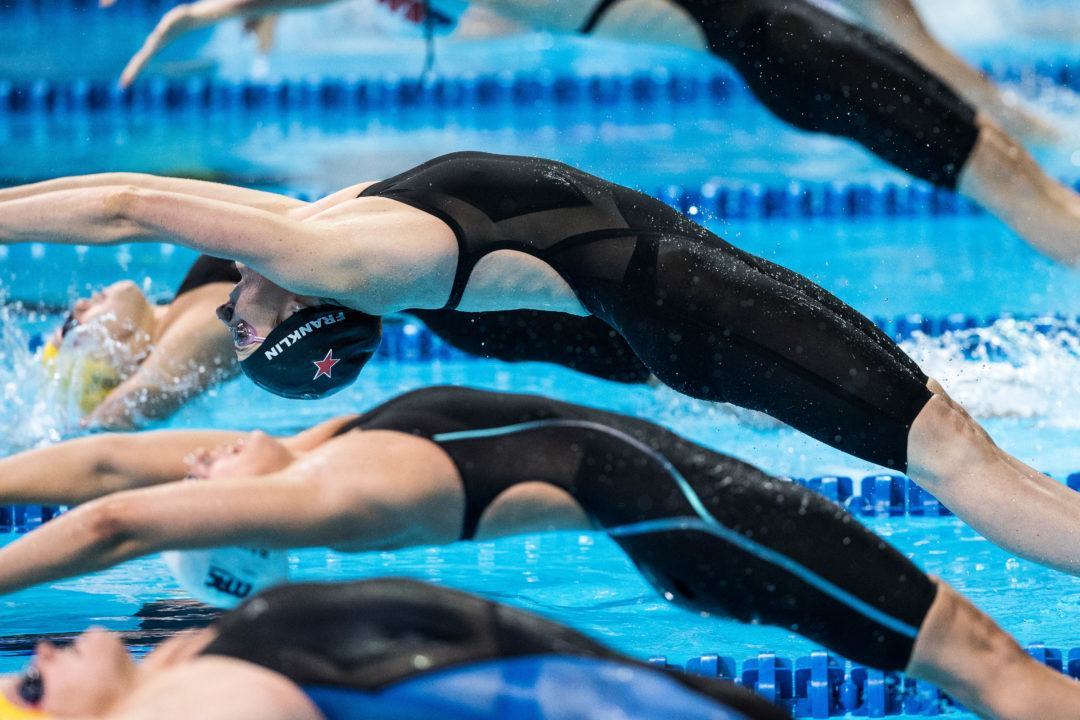 Swimswam Editor in Chief Braden Keith spotted an odd frame at the beginning of the women’s 100 backstroke semi-final heat last night with Missy Franklin. Franklin appeared oddly disconnected from the knee down as she released from the block. Check out this photo:

That’s Missy third from the top. Even at the elite level, you can see that some swimmers drag their feet off the backstroke start, but what sets Franklin apart is how far the rest of her body is out of the water.

Missy Franklin has never been particularly skilled at the backstroke start, although she has swung back and forth from having a competent release and struggles like the one above. Many of these went unnoticed because Franklin had a period where she was so dominant.

For example, check out this start from the 2012 Olympics. Franklin won the 100 backstroke there in 58.33 and was at the height of her powers. However, on closer inspection her start was a disaster and she spent the entire race making up for the ground she lost at the beginning.

Although we don’t get the same angle as above, let’s look at some frames from the race that make me think that Missy suffered from a similar starting problem.

Look at how far her feet are underneath the water, as well as her upper body. This means that she has a short entry and plenty of resistance from her feet right from the beginning. Watch the race in realtime and see how ground she needs to make up:

One of the other reasons that Missy’s starts have been less commented upon is that body size makes a big difference in starts. If she were a smaller swimmer, the lack of precision off the block would likely hold her back from being competitive even within the US.

Missy is using a technique that means there is a high probability of her getting a poor start. Once again, look at the position she gets herself into at Minneapolis Arena Pro Series event this past December:

There’s Franklin again, in the pink suit 3rd from the bottom.

So why does this happen?

Simply put, Franklin makes a lot of mistakes in her start that she has in common with age group swimmers. It is a combination of these mistakes that can lead her into this situation.

This slow motion start (actually one of her better ones) from the Arena Grand Prix Santa Clara in 2013 shows some of them:

That is Missy fourth from the bottom. First observe how she loads up on the blocks. Her posture is not aligned and set on the blocks, she has her back already arched a little, probably in an attempt to get off faster and mitigate some of her other flaws. Then she throws her head, instead of controlling her body. As a result of the lack of body connection and head throw, her legs are practically on their own.

For one final video, here is a great example of how much difference great backstroke starting technique can make, from the master herself Natalie Coughlin. Coughlin is directly below Franklin in this video, 4th from the top.

Although Coughlin initiates the start with her head, she quickly corrects into near perfect posture, then connects her upper and lower body so that everything enters the water through one hole. At 15m, it’s game over!

These are skills that can be taught to all swimmers but are often undervalued despite the difference they can make in any race.

Great analysis! It’d be awesome if we could see more stuff like this on the site

It’d be awesome if Missy saw more stuff like this.

Not a low blow by any means, just a hard truth. She would be swimming the 100 Back at the Olympics with any kind of a decent start. She was at the knees of some of the girls after the start.

Excellent analysis. I wonder if the new start ‘ledge’ on the pad has contributed??? I appreciate the virtual elimination of wall slippage, but I wonder how much bio-mechanical work has been done to evaluate how each swimmer should optimize the downward pressure that can be exerted now…

Great analysis! While these phenoms of swimming are admired for their abilities and performances, it does not mean they are without technical faults.

Maybe she should just push off the wall like during a backstroke set in practice.

Many, including USA Swimming performance consultant Russell Mark, have attempted to work with Missy on improving her starts. Unfortunately, Missy perhaps displays poor motor control when learning new movement patterns. Additionally, Todd is a metabolic/conditioning facilitator and not a strong biomechanics based coach. The resulting situation is culminating in a couple hours…

This is response is the truth

I think for sure Missy could learn to be a great starter, I know I would love to give it a try!

she’s like the tony ervin of women’s backstroke. actually, can we get a similar analysis of tony’s start? we all know its his weakness but would be interesting to see the details behind why. A+ article guys, I second seeing more visual technique analysis like this!

Ervins start did look much better at trials than in the past though. Sure hes no nathan adrian or caeleb dressel, but he at least comes up swimming pretty even with the rest of the guys now. Funny thing is that he said in an interview that he went back to the literal basics of the start and started from scratch