Missy Franklin is Committing to the Cal Golden Bears 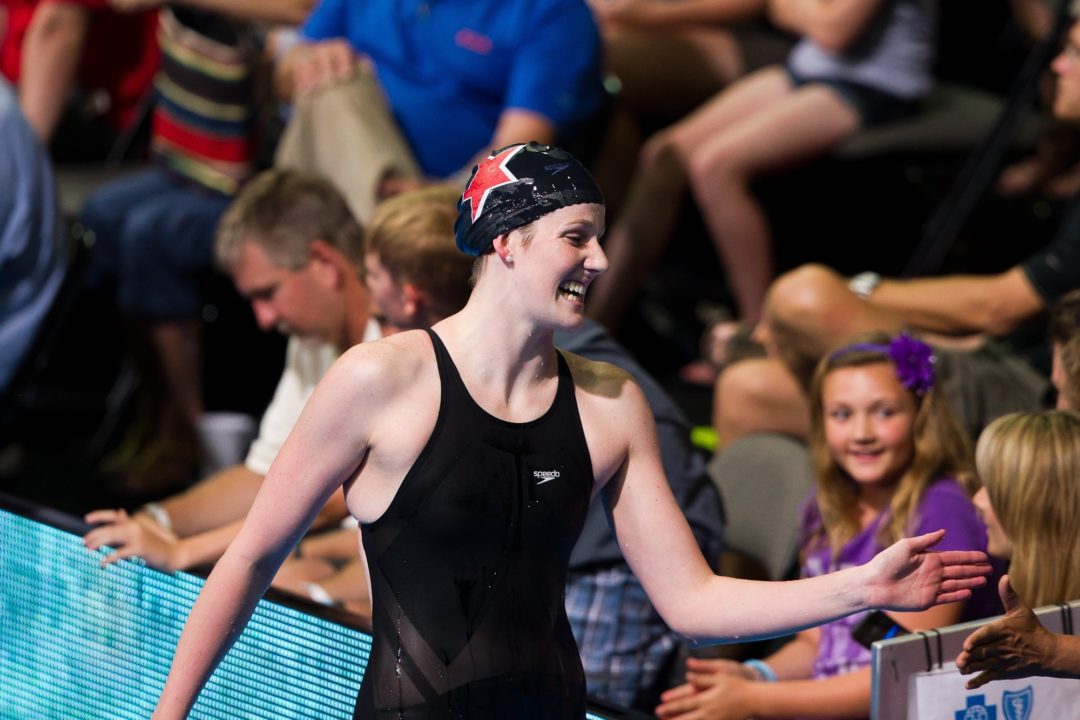 We have a decision. (Photo Courtesy: ©Tim Binning/TheSwimPictures.com)

Teri McKeever wins another one. Swimming superstar Missy Franklin has made her college decision, and will become a Cal Golden Bear next fall.

This is the move that a vast majority of the swimming community expected to happen. All of the signs were there: she fell in love with McKeever during the Olympics, they are the two-time defending champ, former Cal Bear Natalie Coughlin, is her hero; though many people had many thoughts on where she would end up, this decision will surprise very few in the swimming community.

Franklin, who won 4 gold medals and a bronze this summer at the Olympics. hasn’t really focused on a yards swim in years, despite insisting on swimming high school throughout her career (unlike her future Cal teammates Liz Pelton and Rachel Bootsma, who both sat out to focus on Olympic dreams). We still have some good measures of times for her, keeping in mind that her most recent High School Championship was swum in a shallow pool. Still, Franklin probably isn’t as good in yards as she is in long course, but that doesn’t stop her from being the best recruit in this class.

Still, Franklin is a bit of a mystery as to how much she will immediately contribute to Cal’s scoring. Obviously, the answer begins with “a lot,” but she’s by no-means guaranteed to come in as an NCAA Champion. That’s in part due to three of her teammates, Pelton, Bootsma, and two-time defending NCAA 100 back champ Cindy Tran, all of whom are masters of short course and who could go 1-2-3 in the 100 back at this year’s NCAA Championships.

Still, it will be a fun experiment to see how exactly McKeever uses these three swimmers, all of whom have a high probability of making the 2016 Olympic Team. Will she leave them all in the 100 backstroke, or will one of them swim the 100 fly instead? Will Missy focus on the freestyle races? And what about the medleys, where all three are more-than-capable of swimming either backstroke, butterfly, or freestyle?

Let the fun begin. Good luck beating Cal for an NCAA title, at least for the next two years. She has hinted publicly to local news that her plan is to swim collegiately for two seasons, and then turn pro in time to capitalize on the 2016 Olympic rush.

These four are just the tip of the iceberg for what McKeever has in her stable, with one of the class’ best sprint freestylers (Kristen Vredeveld). In the bigger recruiting scheme, now that the two mega-pieces are off of the table (Franklin and fellow Olympian Lia Neal), and as a matter-of-fact all of our top 10 for the women, coaches will begin scrambling to fill out there classes. It’s likely that several teams were holding a lot of scholarship money open for Missy, and will now try and use multiple second-tier recruits to fill those positions.

We’ll also find out about what McKeever and Cal can pull in to finish out their class: she only has a small handful of public recruits so far, and we still think she needs to find a breaststroker.

Franklin also visited Texas and Georgia, but passed on an upcoming visit to USC.

Boring. I was hoping she would pick Texas, USC, or Georgia. Now Cal is unbeatable for the next 3 years or so.

Not boring if you’re a Cal/Pac 12 fan!! 😉 Stanford and USC aren’t just gonna roll over for Cal, either!

Great choice! Cal has the best back record!

The only program besides CAL that has a world class post grad program for women is USC. So logically, given her two year commitment to NCAA swimming and desire to stay for another two years in world class post-grad program, it was one of those two programs. CAL seemed the logical place, given the rapport with McKeever and congratulations to Missy, Coach McKeever, the Pac 12 and USA Swimming since this should work out very well for all.

A no brainer. Cal’s got the top program for both men’s and women’s and the education can’t be beat.