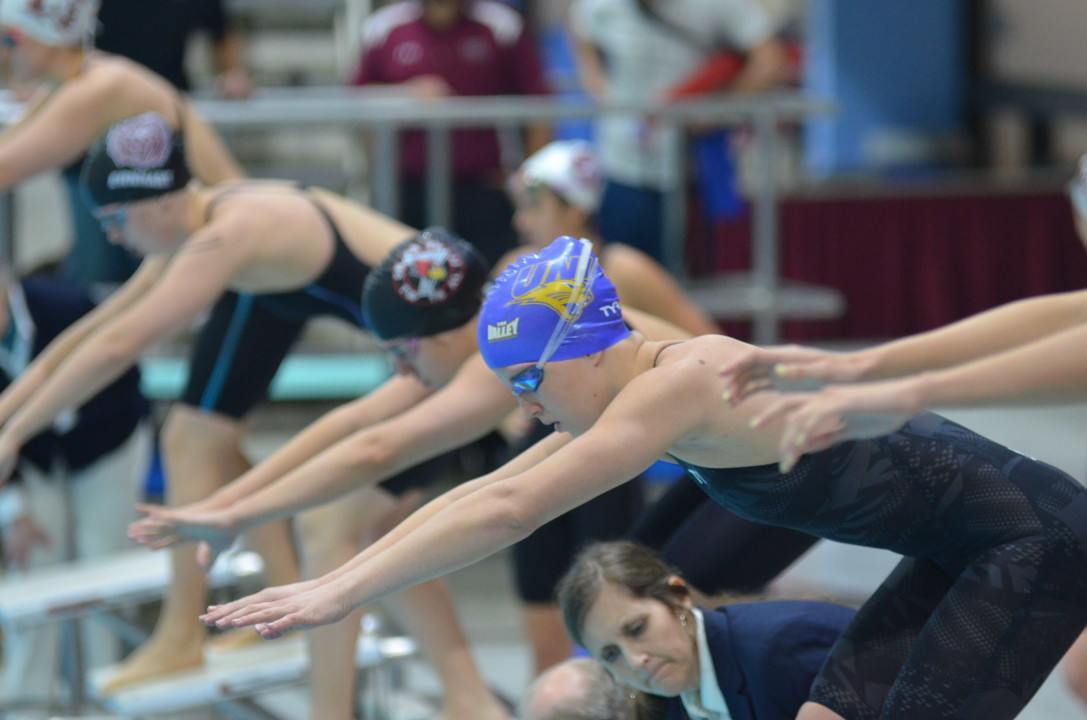 The Women’s 2016 Missouri Valley Conference Championship opened today in Carbondale, Illinois with the 200 Medley and 800 Freestyle relays. With only those two events contested on day one, there is not a lot of separation between the team scores of the leaders, but it seems that expectations have been shaken up a bit already.

In the MVC pre-season coaches poll, the Missouri State Lady Bears were picked to defend their title for the ninth year in a row, taking the top vote from five of the six conference schools.  The Bears have won this meet 12 of the last 13 years, but to extend their domination of the MVC in 2016 will not be easy.   The Southern Illinois Saluki’s won a dual on the Bears’ home turf in October, 125-116, on the strength of what looked to be a nearly untouchable freestyle squad.  With five individual events and three of the five relays in the Championship meet being freestyle you can bet that SIU plans to capitalize and has the Bears in their sights.  Both teams have multiple 2015 individual event Champions returning, but as Bears’ Head Coach Dave Collins sees it, a meet like this is often won “in the trenches,” meaning he is banking on their depth across all strokes overcoming SIU’s home team advantage.

Of course, after day one it is apparent that this six-team championship could pack some surprises by rising programs determined to be a part of the hunt as well. Northern Iowa and SIU will enter day two tied for first, with the Bears four points behind.
WOMEN’S 200 MEDLEY RELAY

The UNI Panthers could not have made more of a statement than their shocking win for the sprint medley relay to start off the 2016 MVC.  Last year they were not only the last place finisher in the event, but their time was also bested by the exhibition B squads of three teams and was nearly five seconds behind the event winner.  This year the UNI squad of Madison Rinaldi, Veronica Herrmann, Crystal Florman and Molly Lembezeder got out in the lead on the only sub-26 second backstroke in the field with Rinaldi’s 25.76. The lead didn’t last though, as Illinois State’s Rachel Holm dropped the top breaststroke split of 28.44 to temporarily surge ahead. At the 150 the Panther girls were separated by only .03 from hard-charging Missouri State but no one was going to take this race from UNI. Molly Lembezeder turned in a 22.52 anchor, the fastest in the heat, to claim the championship.  Yes, that blazing 22.52 anchor was from the girl who finished seventh in the 50 free at the 2015 MVC Championship with 23.81. If they can put together a medley like this, it makes you wonder what else we might see throughout the weekend from this obviously improved 2016 Panther team.

TEAM SCORES (After Day One)

Go Cats! Congrats to Doug and his team. Keep up the fast swimming!

What an awesome swimming coverage Shawn klosterman. Background, history and really nice coverage.! Seriously , one of the better race reports I have read. I don’t know any of these swimmers or teams, but am anxious to see what happens.