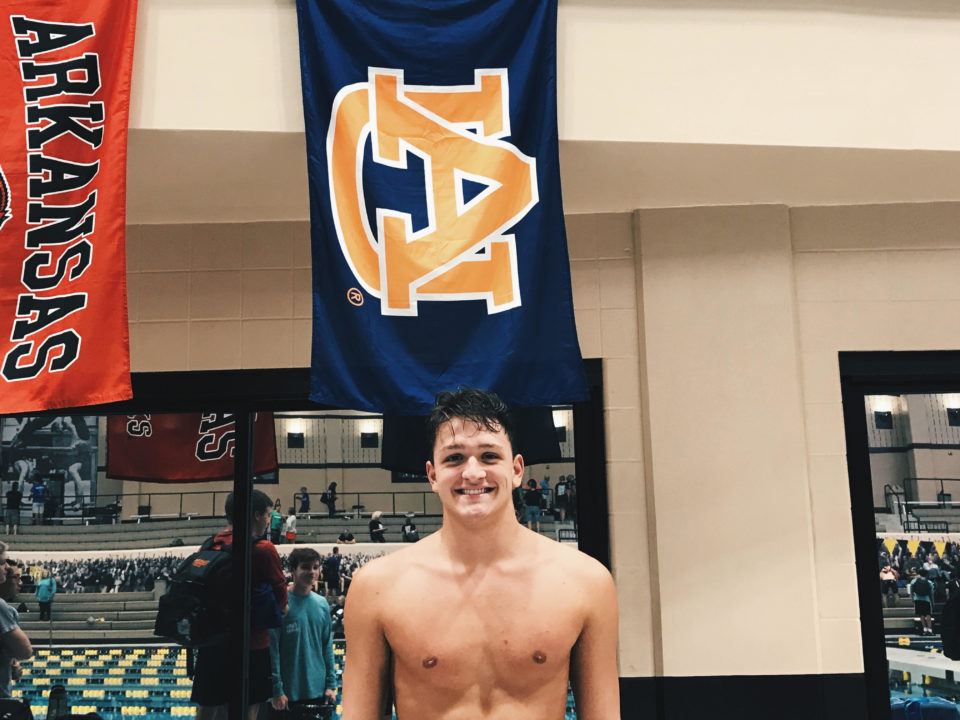 MSHSAA State Champion Brogan Davis,  one of the top recruits from the Show-Me State, has given his verbal commitment to... Current photo via Brogan Davis

MSHSAA State Champion Brogan Davis,  one of the top recruits from the Show-Me State, has given his verbal commitment to Auburn University.  Davis is currently a Tiger, swimming for Head Coach Dayna Powell at Cape Girardeau Central High School, where he played an integral part in their first ever State Championship team title at the Missouri High School meet in 2016.  Davis won both the 200 IM and 100 fly, and contributed to a State Record setting 200 medley relay and State Champion 400 free relay as well.

Davis also trains for Head Coach Jason Cravens at River City Aquatics, where he is a Summer Junior Nationals Qualifier.  One notable swim that might have been missed by those following his career was his 200 fly at 2016 Futures in Austin where he turned in a 2:04.99 in the C-final, a time that would have earned him second overall.

Davis has shown consistent improvement over the last three years, and so far during this high school season at the COMO Invitational he has turned in unrested times that make it look as though that improvement isn’t losing momentum.  Both his 200 IM (1:51.33) and 100 fly (49.09) were Meet Records at the prestigious event and leave him looking to defend his MSHSAA titles in both events this November.  Davis is already turning in times that are on the cusp of earning second swims at the SEC Championship and may be a versatile contributor for Auburn.

“Super excited to announce I have verbally committed to continue my academic and athletic career at Auburn University. The team was so welcoming, the coaches are outstanding, and the facilities were unmatched; there is no place I would rather be attending school. Looking forward to joining the Auburn Family. War Eagle!”