Mireia Belmonte Takes Over The Top Spot In The 400 IM 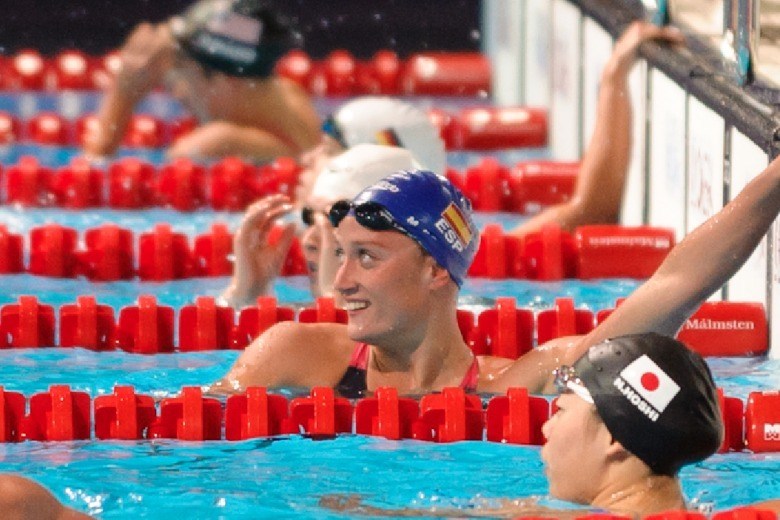 On the second day of the Spanish National Championships in Palma Mireia Belmonte of Spain took over the top spot in the world rankings in the women's 400 IM... Current photo via Victor Puig

On the second day of the Spanish National Championships in Palma Mireia Belmonte of Spain took over the top spot in the world rankings in the women’s 400 IM. Belmonte won the event recording a time of 4:32.92 beating Aimee Willmott of Great Britain’s top time of 4:33.64 and setting the competition record. At the same meet last year the Spanish star posted a 4:35.27, considering she went on to set the Spanish record in Barcelona in a time of 4:31.21 she looks to be on the path to have another great summer.

Catalina Corro Lorente of Spain made an incredible improvement in the event to finish second in a time of 4:39.20. Her best time coming into the event was a 4:44.70, which she posted earlier this year. Beatriz Gomez Cortes of Spain finished third in a time of 4:40.23.

Marc Sanchez Torrens set a new Spanish national record winning the men’s 400 IM in a time of 4:15.64, breaking Javier Nunez Molano‘s record of 4:16.98 which he set in 2008. His time also puts Sanchez Torrens in the seventh place spot in the world rankings.

Mireia Belmonte is so beautiful and yet so tough. There is currently no male swimmer who attempt the crazy schedule of Belmonte (400/800 free, 200/400 IM, 200 fly), and in terms of mileage I think she even beats Hosszu.