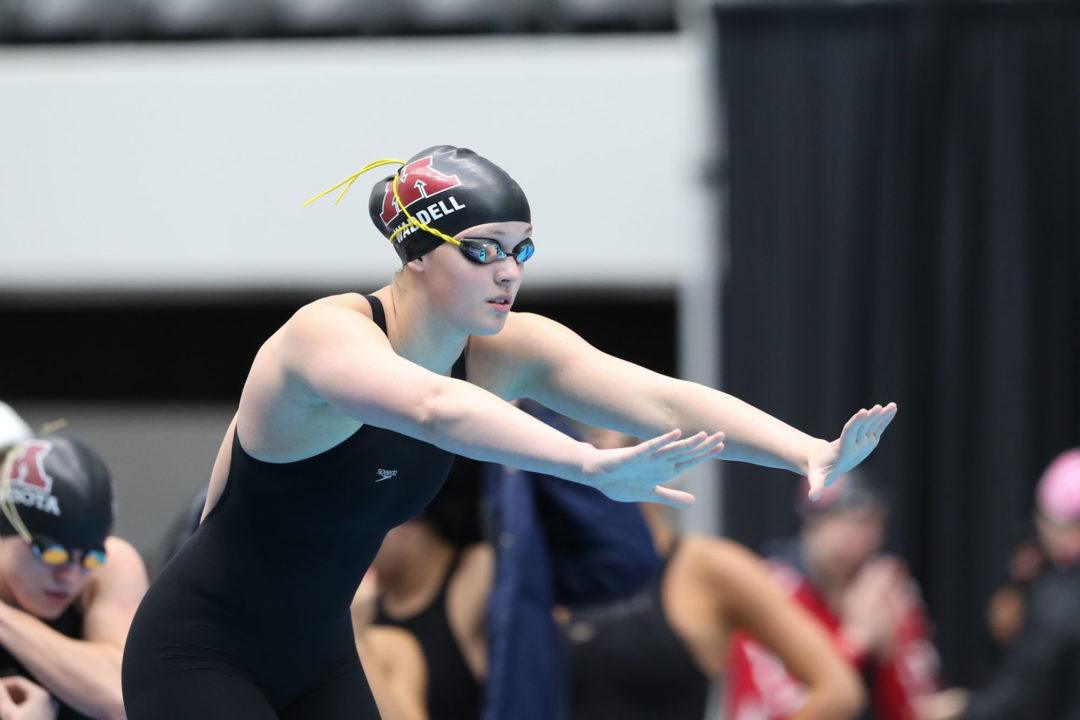 Tevyn Waddell was one of five Minnesota women who won a pair of individual events as they rolled past Iowa. Archive photo via Tim Binning/TheSwimPictures.com

Rivals Minnesota and Iowa clashed on Friday, with the Gopher women and the Hawekeye men walking away with wins. Minnesota didn’t lose a single race on the women’s side, winning the meet by a score of 190-109, while the Iowa men won a much closer battle by a score of 162-138.

The Gopher women were led by a group of five who each won two individual events and contributed on at least one of the two victorious relays.

The Gophers started the meet off with a win in the 200 medley relay in a time of 1:41.87, as Tevyn Waddell, Lindsey Kozelsky, Danielle Nack and Kaia Grobe finished nearly two seconds clear of Iowa. The five double-winners on the day would follow with five back-to-back wins, as Mackenzie Padington, Chantal Nack, Waddell, Kozelsky and Danielle Nack put Minnesota out to an insurmountable lead.

Danielle Bergeson finished things off individually for Minnesota, winning the 200 IM in 2:05.20, and the Nack sisters, Avestruz and Padington closed the meet with a win in the 400 free relay. In the diving, Minnesota’s Mariam Khamis won both the 1-meter and 3-meter to give them a perfect 16/16 meet.

Despite putting no wins on the board, the Hawkeye women still had some solid performances. Sophomore Hannah Burvill had three runner-up finishes in the 100, 200 and 500 free, and senior Kelly McNamara and freshman Kelsey Drake both had solid runner-up showings in the 100 and 200 fly, respectively.

As previously mentioned, the men’s meet was much more tightly contested. The Iowa men prevailed by just 24 points, thanks to a pair of relay wins and two men putting two individual wins on the board.

The Hawkeyes were also buoyed by individual wins from Michael Tenney (1000 free), Joe Myhre (100 free), as well as divers Will Brenner (1-meter) and Anton Hoherz (3-meter). In the final event of the night, the 400 free relay, Myhre and teammates Jack Smith, Will Scott and Michal Brzus all put up 44s to win easily in 2:58.57. Smith and freshman Daniel Swanepoel were the two who joined Mende and Twarowski on the winning 200 medley relay.

Minnesota was led by senior Conner McHugh, who put up a pair of ‘B’ cuts in winning the 100 (54.74) and 200 breast (1:57.13). In the 200 he crushed the ‘B’ cut by over two seconds, as teammate Brian Poon also got under the mark in 1:59.26. McHugh was an honorable mention All-American last season in both breaststroke events, placing 11th and 12th respectively at the NCAA Championships.

Check out press releases from Minnesota and Iowa here.

Iowa men also rested and suited. Both men’s teams look pretty down tbh. Solid Gopher women’s team though, can’t wait to see them at an invite!

You weren’t even at the meet dude…

Both teams were in speedos

What college team is rested this early in the season?