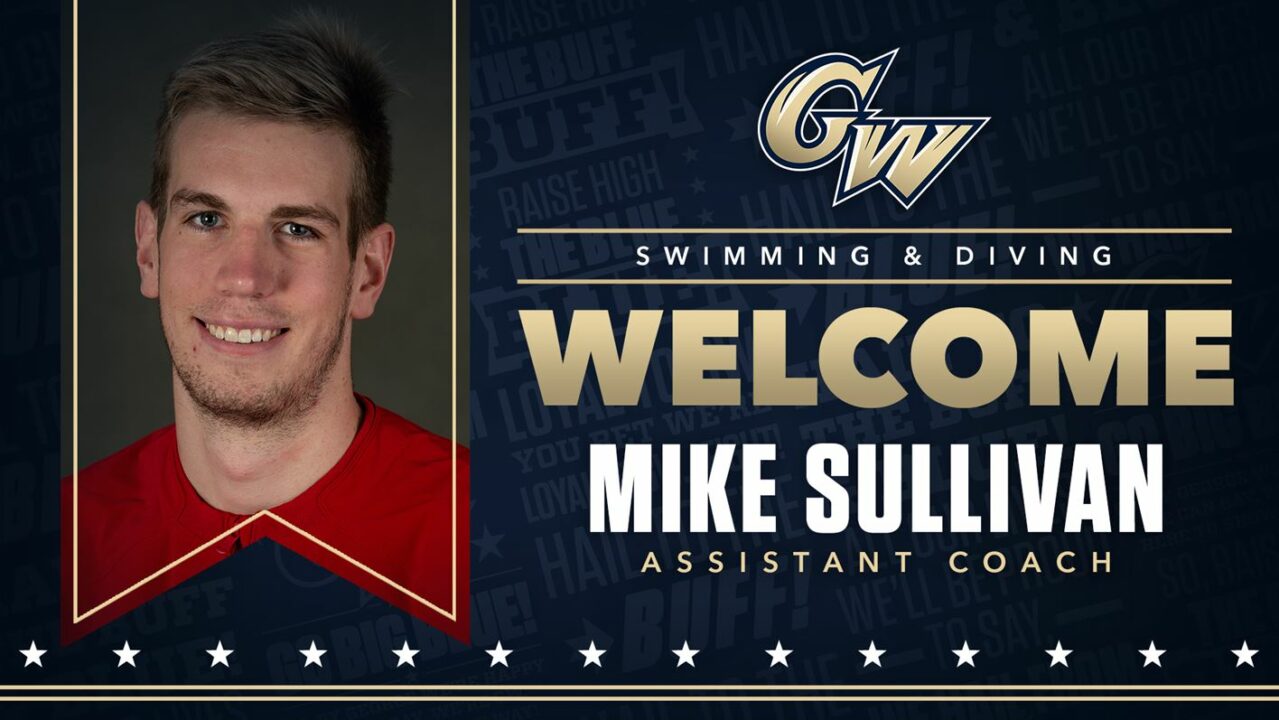 This past season Sullivan served as a volunteer at Ohio State, primarily working with a distance group that produced five individual All-Americans Current photo via GW Sports

A DMV native, Sullivan returns home after a standout collegiate career at Wisconsin and coaching stints at Badger Aquatics Club and Ohio State. This past season, he served as a volunteer with the Buckeyes, primarily working with a distance group that produced five individual All-Americans and helped the program place seventh nationally at both the men’s and women’s NCAA Championships.

“We’re thrilled to welcome Mike to the GW Swimming and Diving family,” Thomas said. “I was immediately impressed with Mike’s intelligence as well as his commitment to applying what he’s learned from his significant experience as a student-athlete and coach in the Big 10. I always tend to keep an eye on those that volunteer or compete at the highest level because of the positive attributes and expertise that it will bring to our student-athletes.

“Mike also carries a demeanor and value system that will fit well at GW, which is critical to long-term success and will immediately build trust with our student-athletes and staff. I’m looking forward to getting started and continuing our climb as a program with his leadership and experience to pull from.”

Sullivan joins a program that has established itself as the class of the Atlantic 10, earning four men’s titles and a women’s crown over the past five years while being represented at the national meet three times in that span.

“I’m so grateful for the opportunity to be a part of GW Swimming and Diving and would like to thank Coach Thomas for bringing me into the program,” Sullivan said. “The team has had incredible success in recent years, and I’m excited for the chance to be part of this group. I can’t wait to get the season started and work with such an amazing group for the best year yet.”

Sullivan was part of a historic season at Ohio State, helping the Buckeyes claim a women’s Big 10 title in addition to a third-place finish at the men’s conference meet. His distance group produced seven Big 10 A finalists and 16 total scorers.

Ohio State shined on the national stage with its best-ever finish on the women’s side and its top placing in the men’s meet since 1965. In all, the program had 13 men and 10 women land All-American honors in 2021.

In addition to his on-deck responsibilities, Sullivan managed recruiting for the men’s team and handled administrative duties related to scheduling, travel and meet planning.

Sullivan landed at Ohio State after a year with Badger Aquatics Club based out of Madison, Wis. There, he primarily coached the senior group focusing on high school-aged swimmers working toward competing in college, including a group of 11 seniors signed to continue at the next level.

Sullivan was a four-year letterwinner at Wisconsin from 2015-19, swimming a variety of distance events. He closed each of his collegiate seasons representing the Badgers at the Big 10 Championship before graduating in 2019 with a Psychology degree.

The Bethesda, Md., native was an All-American during his prep career at Walt Whitman High School while also racing at the highest levels of club competition with Rockville Montgomery Swim Club.

GW got a great coach, hard worker and best of all great person! Congratulations Mike on moving forward in what I know will be a very successful coaching career.