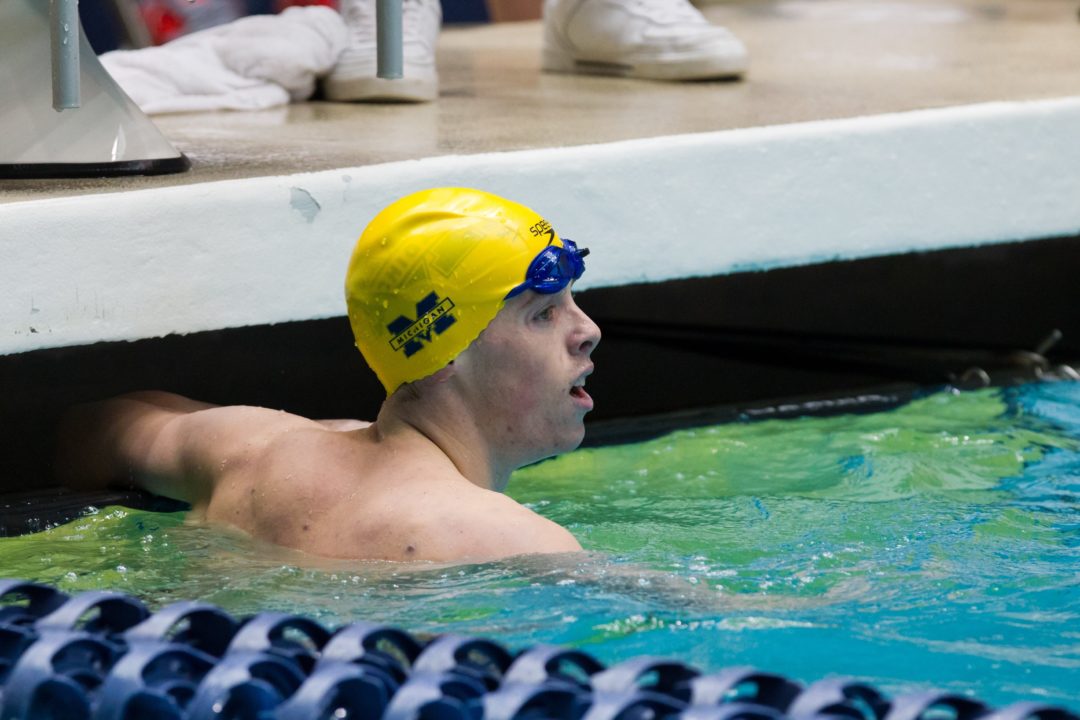 Michigan's Connor Jaeger broke a pool record to start the meet as the Wolverines rolled in one of the country's biggest rivalries. (Stock Photo Courtesy: ©Tim Binning/TheSwimPictures.com)

Ohio State has a team this year better built to contend at Big Tens than the very young squad they had last season. Still, Michigan will walk away from the two-day dual at the Canham Natatorium feeling confident after putting a 251-75 hurting on their rivals from across the border.

This meet was spread over two days, but was effectively a single dual meet; athletes were only allowed to score in 4 events, and it was a standard dual meet event schedule, so there were some extra swims; that is not to say that the Wolverines pulled any punches. After getting a pre-meet speech from Athletic Director Dave Brandon to “put their feet on the accelerators and not let off,” the Wolverines did just that. They didn’t let up until the lead was over 100, and even then the exhibitions didn’t go to event winners.

The Buckeyes were without their divers and one of their best swimmers, which would have probably made a difference in the scoring, though not nearly enough to make up the gap.

Note that Ohio State was without their biggest star, Tim Phillips, for this meet. That left Ohio State in a rotation through their meet-opening medley relay, where they ultimately had to move their best sprinter Jason Schnur to the butterfly leg. That move cost them, as their “A” relay was only 3rd here in a 3:19; the Wolverines’ A, meanwhile, swam a 3:11.04 (including a 43.2 anchor from transfer Zach Turk) to run away with an early event win.

In the second event of the meet, the Wolverines flew even higher as Olympian Connor Jaeger broke a 13-year old Canham Natatorium record in the 1000 free with an 8:59.17. That wasn’t close to the 8:43 that Michael McBroom put up down in Austin for Texas on Friday, but don’t let that diminish how impressive a sub-9 minute 1000 free is in a dual meet. It’s actually the second time he’s done it this season, as he did it at the opposite end of the season in October as well.

The old record was held by Chris Thompson.

The Wolverines also got a 9:04 from Ryan Feeley and a 9:07.00 from Sean Ryan to show off the depth of distance they’ve developed. Alex Miller was Ohio State’s best finisher in 9;13.77, hanging tough with Ryan and Feeley through the first 700 yards or so.

That 1-3 was very much the story of the first day in Ann Arbor. Even in events where the Buckeyes are very good, Michigan took them to task. For example, in the 50 free, Michigan went 1-2-3 led by a 19.89 from Turk, taking maximum points against even defending NCAA bronze medalist Schnur (20.52).

The Wolverines ended up sweeping the victories on the first day of competition, including a 48.62 from Sean Fletcher on the backstroke and a 53.80 from Richard Funk on the breaststroke, much better than freshman teammate Bruno Ortiz in 55.44. If Michigan could get NCAA points from both of them in that event, it would go a long way toward their national title hopes.

Michigan’s 200 butterfly duo of junior John Wojciechowski (1:45.18) and Dylan Bosch (1:45.60) is rivaled only by the pair down at Florida, and the two now sit 2nd-and-3rd in the country this semester. Bosch was a bit off of his spring-best with that swim (about a second).

Michigan warpped the day in fashion with a 2:56.61 in the 400 free relay, featuring three guys under 44 seconds (and one of them wasn’t Miguel Ortiz – who was runner-up in the 50).

As the Wolverines took a 140-24 lead at the midway mark, the Buckeyes performed marginally better on the second day of competition. Michigan started out well again in the 200 medley, with their A posting a 1:25.89 – best in the country this semester and just a few-tenths from their season’s best.

In the 500 free, Conor Jaeger won in 4:23.17; although perhaps overall the Michigan distance squad didn’t look quite as good as it did in the longer 1000. Anders Nielsen for the Wolverines took 2nd in 4:23.46, though was exihibitioned.

Finally, though, in the 200 backstroke the Buckeyes broke through with their lone win of the meet. Steven Zimmerman put in a 1:46.49 for the victory, coming just a few minutes off of a solid 1:52 in the 200 IM. Michigan looks a little better in this race, the team’s weakest event, with Ryutaro Kamiya finishing 2nd in 1:46.97.

Getting just a bit of momentum from that win, the Buckeyes looked good in the last two events. Breaststroker Christopher Cowley was a 2:03.4 in the 200 breast, about three seconds better than in his last outing. Then in the 200 free relay, the Buckeyes made a race of it with a 1:20.66; all four swimmers were 20-lows. Michigan came out with another win, though, in 1:19.78 on a 19.37 Miguel Ortiz anchor.

This gives Michigan its 22nd-straight victory in this series, head-to-head, and a sweep of the season series (alongside a win by their women in January).

Jaeger, Feely, and Ryan all negative split their 1000’s. BA.

He’s a beast! He’s one of the most versatile young American swimmers.