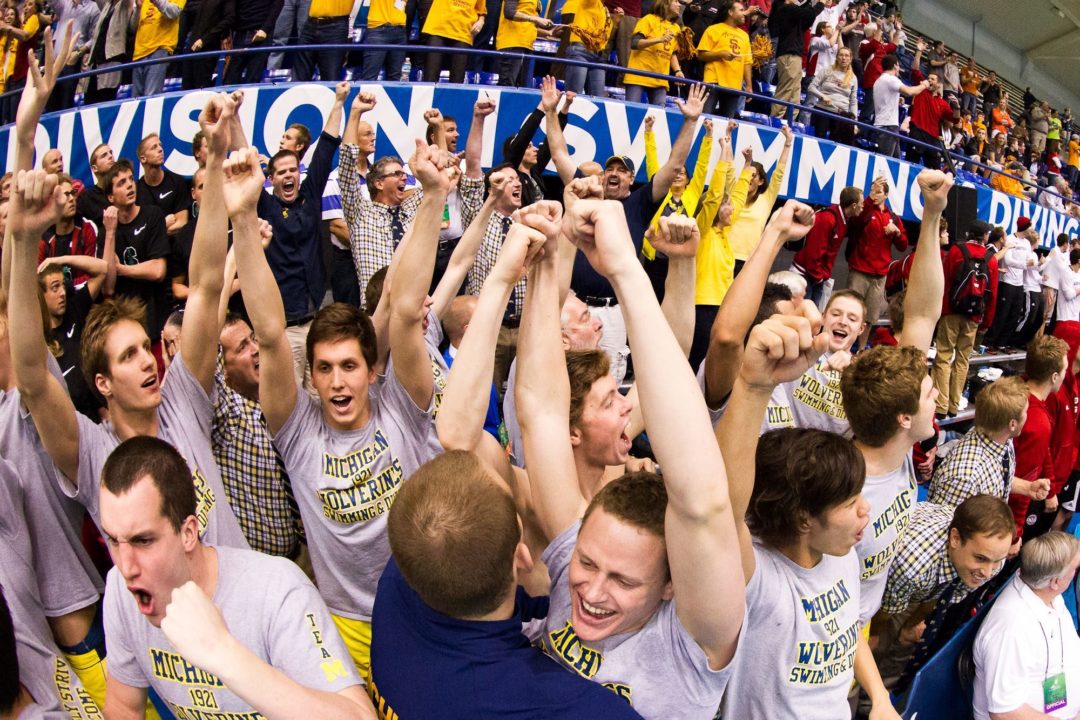 The University of Michigan will have a tall task to replace all of the relay points they're losing, but they'll at least have the support of their home crowd to do it. (Photo: Tim Binning/TheSwimPictures.com)

The 2013 men’s NCAA Champions from the University of Michigan have announced their 2013-2014 meet schedule, and it will include a full 8 events at the Canham Natatorium in Ann Arbor.

The meet begins with a home dual against Iowa before rolling into the 2013 edition of the Water Carnival (see Bobby Savulich’s highlight reel here). This is one of head coach Mike Bottom’s big innovations that creates a hugely fan-friendly swim meet experience with music, water polo exhibitions, some off-book racing (fin races, for example), and plenty of other hijinks to keep the fans entertained.

After their Alumni meet, the Wolverines will head to the home of their rivals Notre Dame: a meet they’ll attend for the first time since the 2009-2010 season. That meet should have a phenomenal field this year, and the Wolverines will hang around South Bend for a double dual with rising program Notre Dame and perennial powers Auburn.

After a few weeks of training, Michigan rolls into their annual double-dual, two-day meet with Indiana and Texas, that this year will be hosted in Bloomington.

Rounding out a month of nothing but competing in their neighbor state to the south, mid-November will see the Wolverines’ divers, and ‘select swimmers,’ attend the Purdue Invitational.

For the Michigan swimmers, though, the primary winter invitational will be the University of Michigan Open, a brand new meet, and the Winter National Championships in Knoxville, Tennessee.

The Wolverines will then hibernate at their usual winter training spot in south Florida, with the Mike Pepe Invitational and Orange Bowl Classic meets in Ft. Lauderdale and Key Largo, respectively.

The second half of the season will put Michigan into the meat of their Big Ten schedule, with dual meets against Purdue and Northwestern on back-to-back days in – where else – West Lafayette, Indiana at Purdue’s natatorium.

They will then host strong mid-major opponents in Eastern Michigan and Oakland in mid January for a majority of the team while they send a small elite group to the SMU Classic in Dallas.

February begins with a road meet against Ohio State before the Wolverines retire to their home confines for the duration of the month. That includes hosting Michigan State, hosting the “First Chance Meet” that they performed so well at last year, and then hosting this year’s Big Ten Men’s Championship meet from February 26th through March 1st. They enter this season with a three-year Big Ten title streak on the line.

They then go to a last chance meet at Ohio State if necessary, Zone diving at Iowa, and the NCAA Championships in Austin, Texas, where from March 27th-29th they will look to repeat as NCAA Champions against some stiff competition (including the home-team Longhorns).

Michigan returns a huge portion of their individual scoring, including Olympian and NCAA Champion Connor Jaeger, but they graduated many significant parts of their impressive sprint relays (Miguel Ortiz, Zach Turk, and Sean Fletcher, for example). For the Wolverines to have a chance, sophomore Dylan Bosch will have to continue his rapid accession, and swimmers like Bruno Ortiz and Richard Funk will have to take their huge talents and apply them to leadership roles on the Michigan relays.

The full schedule, courtesy of the University of Michigan, is below.

Heard there is no Purdue Invite this year

Someone should tell that to Michigan….