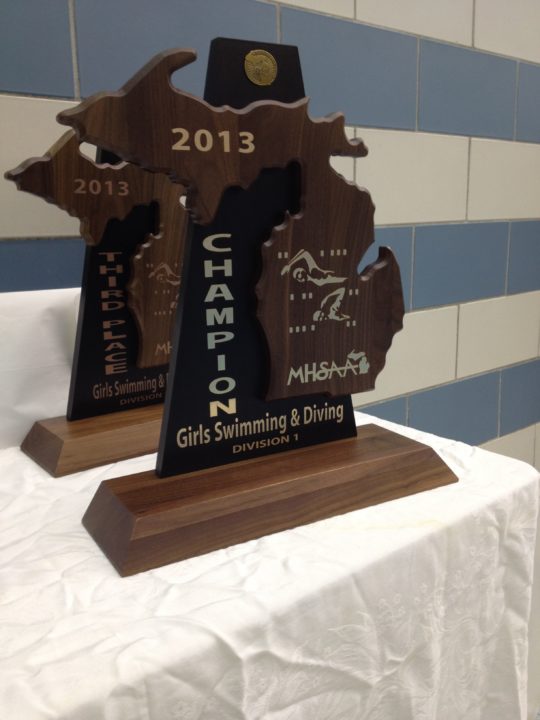 The Michigan High School Athletic Association wrapped up its girls state meets this weekend, with the state’s biggest schools, classified in Division 1, competing at Oakland University, Division 2 racing at Eastern Michigan University, and Division 3 swimming at the Holland Aquatic Center.

Two all-time state records fell, both of them to Waterford juniors. Maddie Wright won the 100 fly, going 53.88 to break her own Division 1 record and add the Michigan all-time record as well. Miranda Tucker won the 100 breaststroke, going 1:01.36 in the prelims to break Division 1 and all-time records, as well as the Oakland pool record. She went 1:02.06 at finals to take the state championship.

Farmington Hills’ only individual win was from junior Roxanne Griffore in the 50 free. She was 23.57. She also led off a 200 free relay that won and broke a Division 1 record. The team of Griffore, Maddy Loniewski, Alaina Skellett and Kathleen McGee went 1:35.31.

Two more individual Division 1 records fell on the day: Ann Arbor Skyline sophomore Katie Portz went 50.23 in prelims to break the 100 free record. She went 50.45 at finals, but still picked up the win. Chanel Bonin of South Lyon held onto the top seed in the 100 back, winning in 54.16 to break the Division 1 record.

Other event winners were Saline freshman Amy Stevens in diving, scoring 462.70 and Northville freshman Laura Westphal in the 500 free, clocking in at 4:57.84.

Holland’s 200 medley relay of Garcia, Anna Giesler, Abi Johns and Clara Steeby went 1:46.24 to open the meet with a win. The team of Holly Morren, Cassie Misiewicz, Emily Johns and Garcia won the 400 free relay in 3:27.79 to close the day.

Bloomington’s Hills’ junior Mollie Pulte was another dual-event winner and Division record-breaker on the day. She won the 200 free, breaking the Division 2 record in prelims, going 1:47.90. She went 1:48.37 at finals to seal the win. Pulte also won the 100 free, going 49.87 to break another Division 2 record at finals.

Pulte also led Bloomington Hills to a Division 2 record in the 200 free relay. The team of Maren Taylor, Hannah Richard, Sophia Schott and Pulte went 1:35.24, thanks to a big 22.6 anchor leg from Pulte. They missed the state record by four tenths at prelims but finished the job in the finals session.