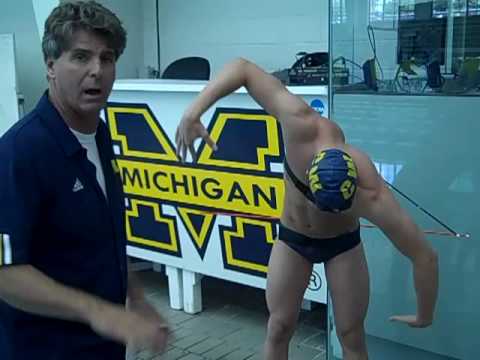 Michigan coach Mike Bottom is constantly pushing the envelope in the sport of swimming.

Mike Bottom has never shied away from trying for some creativity. When his Michigan Wolverines take on the Eastern Michigan Eagles on Friday at the Canham Natatorium, the pool might feel a little short. That’s because it, in fact, will be a little short. The course will be set up at 20 yards long.

Check out the event schedule for Friday (which will roll into a more traditional 25-yard meet against Purdue on Saturday).

After some research, the Michigan staff rolled all the way back to the 1967 AAU Record Books, the last to show 20-yard records (which they had confirmed with the International Swimming Hall of Fame). One would imagine that most, if not all, of those records will be crushed.

1967 certainly wasn’t the last time races were swum in a 20 yard pool, however. During summer league meets in Suburban Chicago, there was one team in the league that still used the shorter distance that was once more standard, leading to some interesting conversion factors. If anyone has swum in this length of a pool before and has times (that they can prove), leave them in the comments and we will see how those stack up to what the Wolverines do tomorrow.

Bottom has confirmed that they will be enforcing the same 15-meter underwater rule as we see in a normal college meet. The last time there was any meets of any serious competition in a 20-yard pool, this rule wasn’t in place. Expect about two strokes per length in many of the races.

Expect even the races that come out to the same distance (for example, a 100 yard free) to be much faster over 20 yards because of the extra turn (5 lengths instead of 4). This meet could be a lot of fun to watch for those who are fans of the dolphin kick.

How do you swim a 200 IM in a 20-yard pool? Do you flip the strokes in mid-pool? Do you add extra lengths in some legs?

Oh Yeah – Twenty Yards!
My breakout meet as a 10 & Under was in the famous 20-yard pool in Tarboro, North Carolina at the 1967 East Carolina Swimming Association Championships … the same pool that hosted AAU Nationals maybe 40 years before that and also the home to many great swimmers of the day (including Coach Brooks Teale) …. and it was a fateful summer for the Kinston Swim Club to finally overcome our rivals who were hosting that day and win our first of many coveted ECSA Championship Meets! Ten and unders swam 60’s (instead of 40’s) that year and I am sure that worked to this distance kids advantage 😉

Though I got there after it was torn down and never saw it myself, the old Texas A&M pool was 100 feet long, so I hear. They had a bulkhead that was installed to make it 75 feet (25y), and on the other side, the remaining area was used for a few warm-up lanes. My summer pool in the Washington, DC, area was 100 feet long, as well.

If memory serves, SMU’s pool had brass markers on the deck where the 220y and 440y races were marked.

UGa’s former pool was 55y, though it was replaced by Gabrielson. Pitt’s current pool is a renovated 55 yard pool. 55y is 11 inches longer than 50m, so they had to install some… Read more »

In New Zealand, I have seen a 50m pool with bulkheads that have tunnels that exist for the lane lines. This set up allows for the 50-meter lane lines to stay in place at all time even when moving the bulkheads.

Well, these lines must be longer than 50 meters as they go wall to wall and the blocks reside on the bulkheads. So a 50 meter course has its bulkheads to the ends.

So, a 20 yard course would be a snap to set up without any lane line issues.

Plus, another gem from New Zealand, was the national time standards for 25m, 33.3m and 50m pools. That ended a few years ago however, if memory… Read more »

GO EAGLES! Don’t be surprised if it’s not only U of M swimmers breaking records at this dual meet.

The 1960’s was the era where most of the swim pools in Orange County California were built since this was before Prop 13 and you could built a pool at every campus and this was the most student population growth since a lot of folks moved from the Midwest and so forth. A lot of 25 yard pools at the high school campus and 50 meter pools at two of the community colleges Cypress which use to have an age group team as well and Golden West which has had a college and age group team for many years.

Yorba Linda California and Tustin California had 20 yard pools. Yorba Linda was not that old at the time built in 1969. I think I read the high school now has 25 yards by 30 meters. The Tustin pool is no longer in use since it had a novice team Tustin Meadows and a swim school that if out of business.