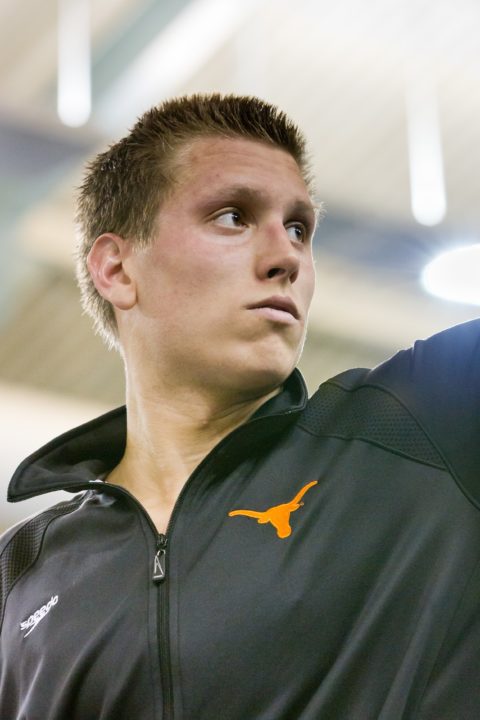 In the first day of tri-meet action against Arizona and SMU (the only scored day), Texas’ Michael McBroom has hit...

In the first day of tri-meet action against Arizona and SMU (the only scored day), Texas’ Michael McBroom has hit an all-time NCAA best in the men’s 1000 free with an 8:43.48 as the Longhorns beat Arizona 166-125 at home.

That broke a Texas Swim Center pool record, and is the fastest time ever swum in NCAA competition, though putting the swim in context is a bit challenging; we usually only see it raced on its own in dual meets, because it’s not an official NCAA Championship event in Division I. That also means that it’s incredibly rare for anybody to swim this race tapered. The previous best all-time in a college meet was Michigan’s Chris Thompson at NCAA’s in 2001 where he swam an 8:44.11 en route to a then-record-setting 1650 clocking.

The all-time best is still far from where McBroom is, with Erik Vendt having swum an 8:36 at the Toyota Grand Prix at Belmont in 2007.

That was just the beginning for a Texas team that was dialed-in at this meet (they were suited up). In their endless quest to find their top medley breaststroker for this season, Austin Surhoff is their latest attempt. He swam with great success on the 400 medley relay where he split a 53.55, just four-tenths slower than Arizona’s Kevin Cordes, Texas won that relay in 3:12.43, with SMU 2nd in 3:12.97 thanks to a splendid back-half from David Larsson (46.81 fly) and Mindaugas Sadauskas (43.00).

Arizona was not as good as we saw them against Cal last weekend and took 3rd in a 3:16.

Dax Hill took the next win with a 1:33.92 in the men’s 200 free. That’s his best time of the season and ranks him third in the country in 2012-2013. His teammate Clay Youngquist was 2nd in 1:35.7 showing a vastly different level than Hill put up – Youngquist is one of the two swimmers who has been faster than Hill this year.

The stars of the day for Arizona overall were their freshmen. Besides Sovero’s win, South African freshman Michael Meyer won the 200 fly in a 1:44.3. He hasn’t been heard from as much as fellow South African freshman Dylan Bosch, though the two have a similar specialty, but Meyer now moves to 5th in the country in the race. That’s just one spot behind Bosch in the Collegiate rankings.

Suddenly, Texas doesn’t look nearly as thin as they did at the turn of the semester. This is a very good team that now just remains with a question of whether, in a 5 relay meet at NCAA’s, they have enough pieces to put everything together.

Umm…Gretchen Jaques anyone?! what a meet!!! 59 in the breastroke (PR) 52 in the butterfly (PR) 49 in the freestyle, thats outrageous for a dual meet!!! She has really, really found her groove this year. and also Sam Tucker is finally back up to the level she should be at with a 1:44. Carol is doing an excellent job with this group of girls. cant wait for their championship season.

I thought a lot of teams had some outstanding swims on each side…bonnie brandon posted a great 1000 time, the texas women/men freestyle group looked on. THis is going to be a good year at NCAAs! lots of room for upsets.

Gretchen and Dax were the stars of the night.

You think Eddie misses Woody? Remember I am the one who said he was bad news last year when he left. I bet Woody wasn’t Mr. Positive on the pool deck yesterday!