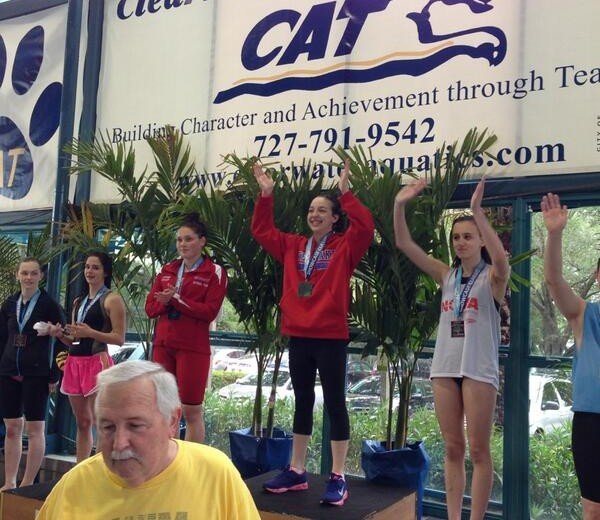 During Thursday’s finals sessions at the 2013 Showcase Classic in Clearwater, Florida, we saw several top-ranked national times go up,...

During Thursday’s finals sessions at the 2013 Showcase Classic in Clearwater, Florida, we saw several top-ranked national times go up, and this time, it wasn’t just Michael Andrew.

In the meet-opening short IM’s, Madison Haschemeyer from Springfield, Illinois won the 12-year olds’ 200 IM in 2:11.49. She beat-out Katrina Marty from the Dane County YMCA (2:12.17) – a program that is having a great meet this week so far in Florida.

In the 13-year olds group, Joelle Vereb and Molly Sheffield had a great battle; Vereb’s backstroke leg was about half-a-second better, and Sheffield couldn’t ever catch back up (despite a good closing 50). Vereb won in 2:07.72, and Sheffield was 2nd in 2:07.89.

Barney would end up scratching the 200 fly to focus on the 500 free at meet’s end: a race that was expected to be a big battle.

That extra rest was just what Barney needed. She pushed the pace early in that 50o to swim a lifetime best of 4:58.64 for the victory. Auburn Aquatics’ Sarah Chambliss was also a lifetime best of 5:03.96 for 2nd-place; she closed faster than a minute, the only swimmer in her age bracket to do so, indicating that she might have had some energy left at the end; that could mean a sub-5 minute swim in her near future.

Chambliss also won the 50 backstroke in 26.81, just beating out Meghan Burton and Casey Fanz from Poseidon Swimming, who were 2nd and 3rd.

The fastest time overall belonged to Nova of Virginia’s Madeleine Hadd. She cut almost three seconds off of her lifetime best for a 4:51.80.

Absent of the top seed from the morning heats, Mercury Swimming’s Makayla Sargent ran away with the girls’ 14-year olds 200 fly in 2:07.21.

Once again, the 13-year old champ stole the show, though, with Chenango Aquatics’ Samantha Suer winning in 2:05.82. That’s four-seconds better than her lifetime best after she was just 2:11 in prelims.

In the boys’ races, Michael Andrew took two events in two swims in finals. First came a 1:50.50 in the 200 IM to break his best time (though by a slim .04 seconds). Grant House from the Cincinnati Marlins was second-fastest of the day with a 1:52.49 in the 14-year olds race.

Shane Blinkman from the Hudson Area Swim Team won the 12-year olds division in 2:02.74. That’s the third-best time in the age group this season.

Carson Foster from the Cincinnati Marlins swam a lifetime best of 2:11.75 to top the 11-year olds.

Andrew rolled into his 200 fly around 45 minutes later and swam a 1:53.74. This time, though, he wasn’t the fastest overall swimmer. That title went to David Dixon from NOVA of Virginia in 1:52.01. Dixon held his form throughout the race and finished in a split of 30.01.

And finally, in maybe the best race of the meet, Clearwater’s Matthew Hirschberger outdueled Grant House in the boys’ 500 free 4:29.21-4:32.78. That’s about two seconds off of Hirschberger’s best time, but for the rangy House who is great from 50-500, he now jumps into the top 25 all-time in the age group.