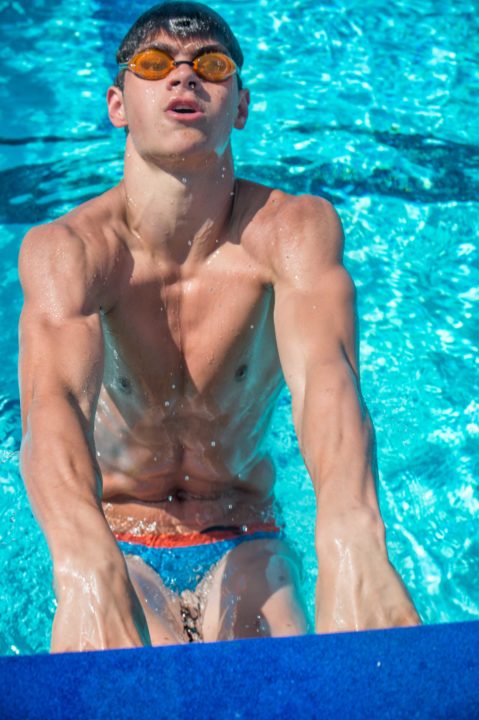 Michael Andrew has broken yet another National Age Group Record in Florida while swimming at the NASA Showcase Classic in Clearwater this weekend. This meet will be his last as a 13-14 before aging up (his birthday comes on Friday, but by USA Swimming rules, as a 14-year old at the meet’s start, his records count for 13-14’s).

Andrew started his meet out with a 1:44.02 in the 200 yard backstroke, which takes a full second off of his own record of 1:45.14 set at the Jenks Sectional in early March.

Andrew now sits well out in front of the all-time top 5 in this event among 13-14’s:

He’s still about three seconds away from Ryan Murphy’s 15-16 record in the event.

Andrew has particular motivation this week, as his grandparents have made the trip in from South Africa to watch him swim – the first time they’ve seen him race since his star has grown so large.

More context to come when he officially ages up.

Congrats! I know people are getting MA NAG fatigue but this kid continues to amaze.

I thought his father was his coach?

Sorry that should have said “grandparents.”

This was a prelim swim, correct?

Wow that’s amazing he went that fast in a PRELIM

he’s such a beast. I wonder what his arm-span is. The picture sure makes it look like there almost no fat on him, just muscle.

144.0 in the 2 back? OMG this guy is just more and more incredible each week. Honestly, I am more excited about Michael Andrew than anyone else in the sport including Michael Phelps comeback.

totally agree with u ! MA is really an amazing phenom … i am happy to follow his steps .