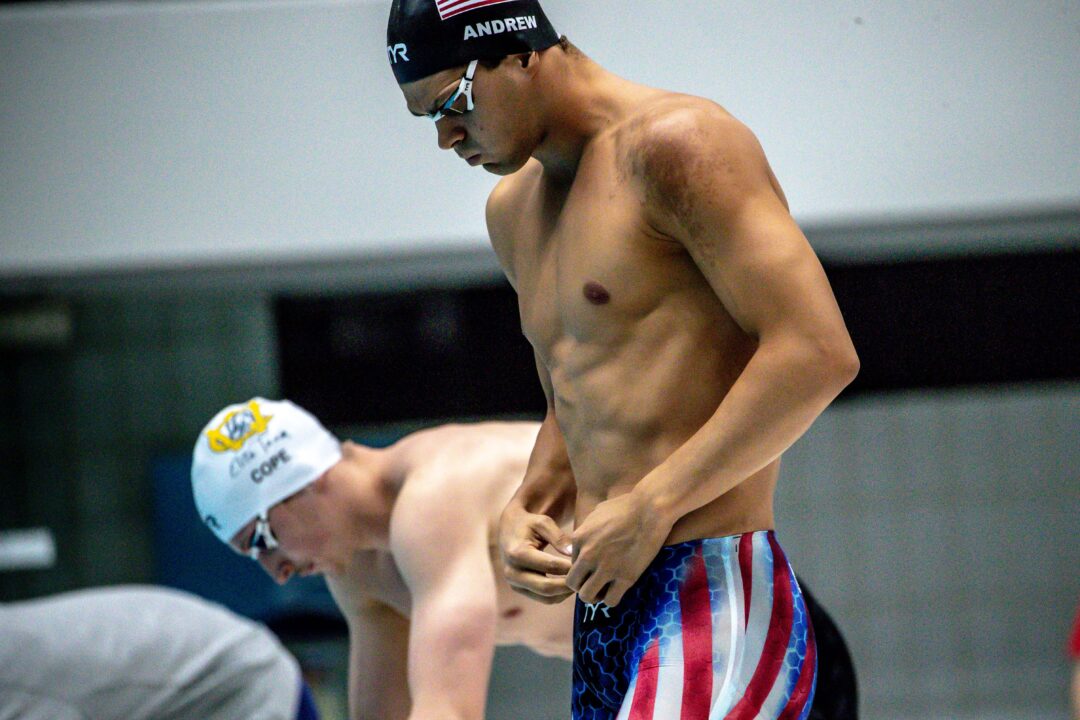 US National Teamer Michael Andrew swam another lifetime best in prelims on Friday at the Pro Swim Series stop in Indianapolis, this one in the men’s 100 fly. The 22-year old was the top qualifier in prelims with a 51.31. That swim put him a full second ahead of the field which is absent most of the top Olympic contenders in this event, though the second qualifier Evan Carlson did go a lifetime best.

The time shaves .03 seconds off his personal best and still leaves him as the 4th-fastest American in the Olympic Trials qualifying period.

For Andrew, who had a rocky season in the fall in the International Swimming League, the momentum is shifting in his favor this week in Indianapolis – in part due to a lighter lineup that so far has seen him swim just one race per day (he has two, the 50 free and 200 IM, scheduled for Saturday). Andrew is famous for entering big schedules and aggressively attacking those schedules, sometimes with great results and sometimes with late-session struggles.

But as the biggest meet, the Olympic Trials and Olympic Games, approach, he and his dad/coach Peter seem to be honing in their USRPT training approach. They recently spent some time in Hawaii training with Anthony Ervin, who is famous for his ‘feel’ of the water, and the result has been swims that are both very fast and have relatively-easy looking strokes.

This all builds up to the big one, the 200 IM, where Andrew’s possibilities are so exciting. It’s likely that we’ve never seen a swimmer with the four-stroke abilities of Andrew, at least at 50 and 100 meters, but the questions continue to be about whether he can finish his 200 IM. The easy-speed he’s shown this week should show up biggest in that 200 IM on Saturday, and if it does, the times could become something really special.

Finish Jani Sievinen was impressive in FINA World Cup (SCM) events back in the 90’s.

No slight to MA but does anyone he’s peaking too early to trials? Like with USRPT he basically swims a year long taper and I don’t know how much there is to gain from peaking now versus in a month (assuming he’s peaking now).

Nah I remember that’s what everyone thought leading into 2018 nationals… but he went all best times and won multiple titles. This is all great for him and I think he could go even faster!

Michael Andrew’s 100 Breast at 2018 US Nationals was the point I knew he was going to be legit on the World Stage. He was (and still is) notorious for dying in his races, but he won the 100 Breast after not touching in the top 3 at the 50 IIRC.

MA has always improved on his in-season times into the championship season. Just look at his meets in 2016, 2017, 2018…. So if he keeps up that trend, he’ll be faster at trials than he is here

This is dinosaur mentality IMO. Swimmers like MA realize that you don’t need to grind your body into dust all year in order to drop time during championship season.

Also, resting more allows you to get more effective race practice during in season meets because you are not always completely broken down.

Do your research. Look at past in-season vs. championship times each year. From what I see, I think Mr. Andrew may have a lot of travelling ahead of him later this summer.

Wonder if he swims this at trials? If he goes sub 51 tonight, I say why not?

The 100 fly overlaps with both the 200 IM and 50 free, and over scheduling has been his downfall in the past. He obviously has the ability to go a 50-point under the right conditions (maybe tonight), and a time in that range could conceivably make the team. But for him the right conditions mean one event a day, as he’s done here in Indianapolis. I hope he doesn’t do this event at Trials, it could screw up all three events for him.

Also if he makes Olympics in 100 breast he will be on a relay.

Adidas was holding him back lol

Michael Andrew has put up with soooooooooooo much criticism in his short career, I really hope swims like his put some of that to rest. He strikes me as intensely earnest, outgoing, super friendly, AND HE HAS FOUND A DIFFERENT PATH TO SWIMMING EXCELLENCE. He may, indeed, not have the stamina to match everyone going through an Olympics of prelims, semi’s, and finals — but I’ll bet he’s at the center of the mix for medals!

He sadly is not a realistic medal contender and never will be.

In the 200 IM he definitely could be.

Breastroke he isn’t, but show me an American man who is.

50 free I think he’s got a strong chance of being in the final and in that event if you’ve got a lane you’ve got a chance.

4th in the world until now..
But of the contenders Shymanovic, Zibei and Wilby have better PB and I would not be surprised if Sacki drops a 58 low 57 high also. There is a chance he could go 58,1 and not medal at all

8
-1
Reply
Troll in the Dungeon
Reply to  Mr Piano

I agree with Rafael. I absolutely think MA can improve and that his breaststroke performance is very impressive, but any drops in time he makes will not occur in a vacuum. Everyone else in the world will also have moved their performances on come Tokyo. While 58.6 is very impressive, Peaty, Kamminga, Shymanovich, Wilby, Zibei, Martinenghi have all been faster than MA, and even if half of them are off form, that still leaves MA out of the medals on current PBs.

So while a medal (or not) is never a foregone conclusion, I’d actually rank him higher in the IM based on his potential and current performers in that event.

5
-1
Reply
Michael Schwartz
Reply to  Troll in the Dungeon

I mean did anybody actually watch his final in the 100 breast here? Did anybody see the finish? It was a short, 1/2 stroke into the wall. If he cleans that up, times it right, then there are a few tenths right there…

I agree. I really think we could see something interesting from him in the IM and 50 free. This guy will probably sneak in for bronze in the 50.

I just have a hard time seeing him medal with guys like Peaty and Kamminga in the Breaststrokes.

Mayyyyybbbeeee if he wins the Breaststroke at trials and goes on a relay?

But MA hasn’t as well

He’s not a gold medal contender, but the 100 breast he has a very solid bronze medal position, which is the best the US has been able to manage at the last 2 olympics. Gold and silver are fairly locked up if Peaty and Kaminga swim at their best but bronze would be possible if he drops another 2 tenths or so. 200IM if he goes 1:56 again he could definitely be in the hunt for a minor medal too

Coulda – Woulda – Shoulda is a galaxy removed from the podium. Best wishes to him BUT I am not seeing a medal in his future.

G*d willing, and with the glory of the Christ, he will win every race!

Has anyone swam in the Olympics with 3 different strokes?

Michael Phelps qualified for the 200 back in 2004, and was just 0.12 off of the WR earlier that year, but opted not to swim it at the Olympics because he already had a billion events

I remember that Phelps qualified, but I was wondering if anyone actually swam it in the Olympics.

Well.. Sjostrom could have done that but she did not as she had A cut on free/fly/back (Don´t doubt she could have on IM also). But Sjostrom swam fly/back at 2008 OG at 14 years old.

While Andrew might swim 3 he won´t have any double on the same stroke like Phelps, Sjostrom or Hosszu had.

Really? A downvote for this comment…WOW!

0
-1
Reply
Troll in the Dungeon
Reply to  Mustangswimdad

Laszlo Cseh individually did backstroke, fly and IM, and then has done freestyle, backstroke, and fly in relays at the Olympics.

If you count IM as a stroke, then the list is much longer: Phelps, Lochte, Sandeno, Coughlin, Hall Sr, Hosszu, Hagino… (at separate Games): Cseh, Bovell, LeClos…