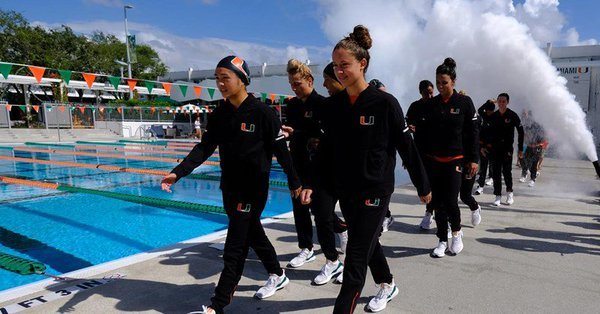 The Miami Hurricanes swimming & diving team returns to the water this weekend when it hosts Boston College on Senior Day at the Whitten University Center Pool. Current photo via Miami (Fla.) Athletics

CORAL GABLES, Fla. — The Miami Hurricanes swimming & diving team returns to the water this weekend when it hosts Boston College on Senior Day at the Whitten University Center Pool on Nov. 2, with action set to begin at 3 p.m.

The Hurricanes (3-3), who will honor four seniors prior to Friday’s meet with the Eagles, will also host BC and FAU in a tri-meet on Saturday, Nov. 3.

“It’s special in a ‘life’ sense,” head swimming coach Andy Kershaw said about Friday’s festivities. “To see how our seniors have matured, the leadership qualities they possess now,  how strong they are as women and the confidence I have in them, both leading the team and going on to be amazing alumni – it’s really special. Of course when it comes to their efforts in the pool, they’ve developed in that way, but I think bigger picture is just about the leadership they bring. It has been amazing.”

Head diving coach Randy Ableman said Herrera is one of the most special divers he has encountered in his 30 years as head coach at Miami.

“Briadam is an athlete that has gotten better every single year. He has got himself in position to perhaps make the next Olympic team. This being his senior year, it’s very important to me he goes out the right way. He has come very close to winning a couple of NCAA titles, and I really want to make sure this is his year, and so does he,” Ableman said. “He is an absolute pleasure to coach. He is one of the all-around best athletes I’ve ever had at Miami. He can  play soccer. He can do anything. We’re fortunate that he fell into diving, because he’s that good of an all-around athlete.”

Kershaw said the leadership of his seniors has been pivotal in the season’s early going, which has featured a number of contributors from all classes across the roster.

“I think a big part of it is, all three of them have gone through different challenges in their careers,” Kershaw said. “Whether it be injuries, setbacks, or whatever, they have handled it quite well and come out the other side. They’ve all learned that by sticking with it and staying at it, that it works out. They’re sharing that with our team, and that has allowed the team to persevere through the beginning of the season.”

Miami picked up two dual meet wins in its most recent competition in Atlanta, topping SCAD and FGCU on Oct. 19. The Hurricanes’ dual meet on Friday will take place during Homecoming festivities on campus.

“We’re excited to race again. We’ve put in two really good weeks of training since our last competition. It has been very energetic, the team’s really going at it. This is always one of the most ‘grinding’ times of the season, and they’ve really gone through it well. I’m excited to see them bring the energy this weekend. There should be a great atmosphere at the pool.”

“It’s exciting. We’re getting more ACC competition this year, which is a lot of fun and great preparation,” Kershaw said. “We’re competing against another south Florida team on Saturday, and we’ve already seen a few of those. In both regards, it’s exciting and I know the team is eager to take on that competition.”