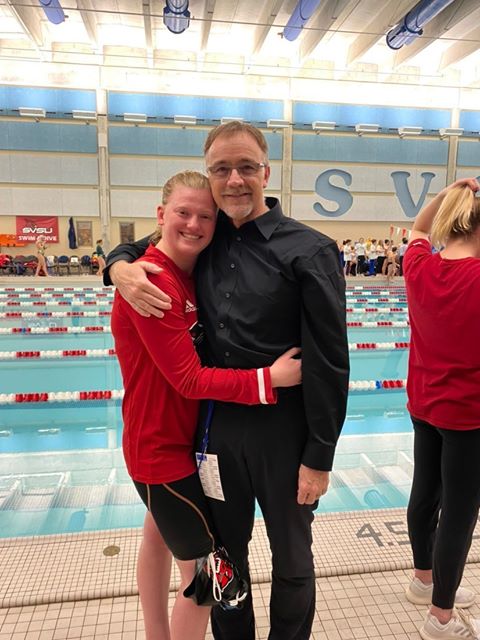 Long-time Michigan swimming coach Don Kimble lost his battle to cancer on Monday morning at 60 years old, yet his coaching legacy will continue to live on. Stock photo via Victoria Postmus

Long-time Michigan swimming coach Don Kimble died in hospice care on Monday morning at 60 years old. Kimble was first diagnosed with a metastatic melanoma in 2019, which led to removing the spot on his chest plus four lymph nodes in August that year. However in March 2020, doctors found a malignant tumor in his brain. On May 1st, Kimble returned home from hospital care, only to be surprised by his community and current/past swimmers with uplifting signs. On May 25th, Kimble died peacefully, surrounded by his family and loved ones.

Kimble has been a member of the West Michigan swimming community since 1980, racking up 6 total Michigan high school state championship titles, 5 state runner-up finishes, and 20 conference titles, and 31 individual state champions over his 34-year coaching career. Kimble’s first team was with the Holland Christian High School boys from 1980-1989, where led the squad to 3 conference titles and 2 state titles. From 1983-1987, Kimble also coached the Maroon girls to 4 conference titles. After taking a 9-year coaching hiatus, Kimble went on to lead the Holland High School boys and girls to matching state championships in 2002.

Along with his high school impact, Kimble was also a club coach for many years with Michigan Lakeshore Aquatics, assisting in many swimmers’ successes at junior nationals, D1/D2 college programs, and qualifying for Olympic Trials. In 2012, Kimble was awarded with the Michigan Interscholastic Swim Coaches Association Matt Mann Award, the highest MISCA honor. In 2014, Kimble was then named to the Michigan High School Coaches Association Hall of Fame, yet his coaching career was not done there.

Later in 2013, Kimble took over the struggling Byron Center High School swim program. Two years later, Kimble led the girls team to their first conference title along with breaking 10 of 11 school records. Kimble also coached Byron Center’s club program, where he built club membership from 25 participants to 150 participants. In July 2019, Kimble was named assistant coach to the Davenport University women’s swim program, which debuted in fall 2018. While his time was short at Davenport, he assisted the team to a 4th-place finish at the 2020 GLIAC Championships, one place better than 2019.

He was also renowned for his whistle, which still echos throughout the state’s pools.

We are devastated to share that Don Kimble, former swimming coach at HHS, passed away this morning. Don impacted the lives of countless student athletes in our programs. Our thoughts are with his family during this difficult time. He will be missed by all who knew him. pic.twitter.com/zY4AvNMjeT

Condolences to the family! Melanoma is nasty

This is so sad. My prayers go out to his family and swimmers.

An absolute legend in his impact in and out of the pool. His legacy will live on in countless lives.
With love, rest easy Don. Miss and love you so much.
Thank you for sharing swimswam.