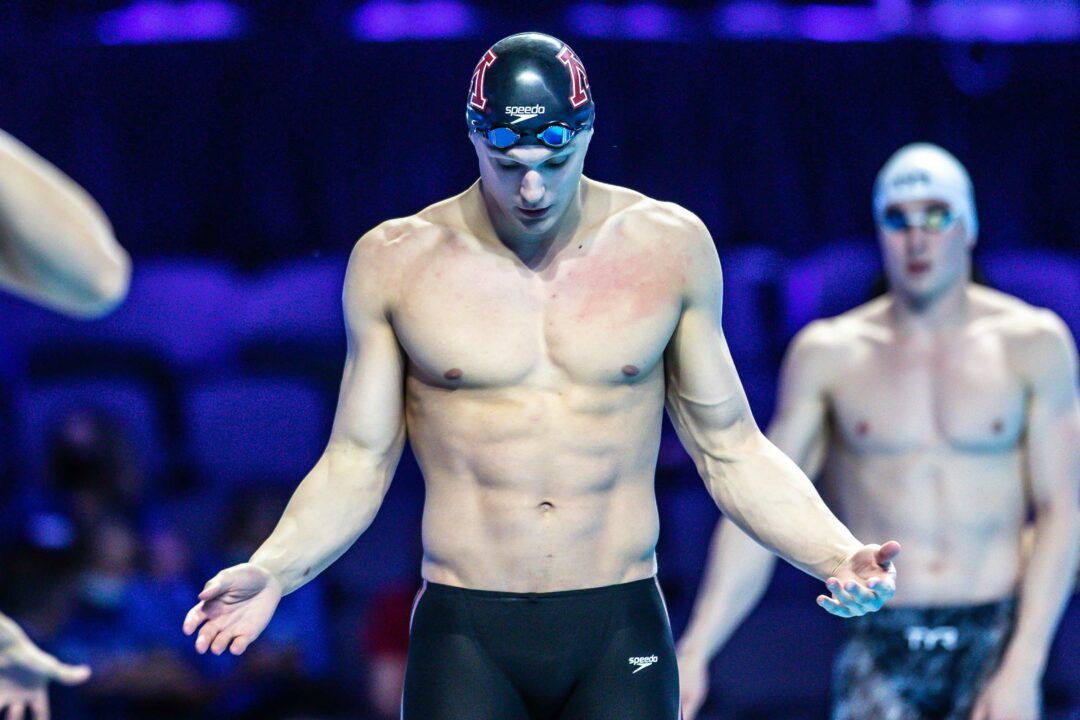 The swim is only 0.40 seconds off his personal best of 50.18, which he swam to win the 100 breast at NCAAs last year. Stock photo via Jack Spitser/Spitser Photography

Minnesota vs Northwestern vs Purdue vs Iowa

Minnesota is hosting a Big Ten meet against Northwestern, Purdue, and Iowa this weekend, featuring two days of competition.

On the first night of the meet, Minnesota’s men pulled out a quick victory in the medley relay, fueled by a massive 22.53 breaststroke split from Max McHugh. It’s nothing we haven’t seen from McHugh before, but nonetheless, a 22.5 split from the NCAA champion is an eye-popping January swim. The Golden Gophers also had a great anchor split from Lucas Farrar, who posted a 19.13. Casey Stowe led the team off in 22.19, and Kaiser Neverman split 21.13 on fly, for a final time of 1:24.98. Purdue freshman Brady Samuels also made waves with his swim, splitting 20.27 on the fly leg of Purdue’s ‘A’ relay.

McHugh was stellar in the men’s 100 breast as well, taking the race handily with a blistering 50.58. The swim is only 0.40 seconds off his personal best of 50.18, which he swam to win the 100 breast at NCAAs last year. With the swim, McHugh also overtook Texas’ Caspar Corbeau as the top 100 breaststroker in the NCAA this season.

Jasmine Nocentini transferring to Northwestern for this season is paying dividends. The sophomore anchored Northwestern’s ‘A’ women’s 200 medley relay to victory in 21.48. She then went on to win the women’s 50 free in 21.92, out-touching teammate Maddie Smith (22.06). Nocentini also split 1:46.11 on the anchor of Northwestern’s 800 free relay.

Now I’m curious what max was at the first 25 Of the 50 relay split?

maybe the rest of the world should swim yards, since we work everyone every olympics

You really showed the australians.. ops

Why, as a matter of fact, yes!

There’s no real good reason to rest for a meet in January. More than likely they were suited. And we’ve all seen how fast you can swim in season with fast suits on.

I wanna see how he’d fare in the NFL

Really wish he could get it done in the long pool.

He broke 1:00 this summer – which was a great start. I think he’s on the right track.

On the Brett Hawke podcast he talks about how he’s transitioning to more power and exposure training from a start of hypertrophy in the weight room. Looks like it’s paying off.

Max is legit 🦍, but podcaster Hawke is a joke.🥴

Disagree re: Hawke, he really gets into the “athlete’s mindset” and training methods in ways that are very engaging.

He also said “hyper-trophy” as in, “hyperdrive” and “Lombardi trophy” which got a hearty chuckle from me.

(I picked up the meathead pronunciation recently, it’s also dumb.)

I am a shameless meat head.
Gonna go do some curls now.

Hmm.. some pretty rested swims. Wonder if they’re going for individual cuts now, since there’s no reality where either team wins conference, and getting a larger training block (compared to other years) for NCAA’s.
I hope…