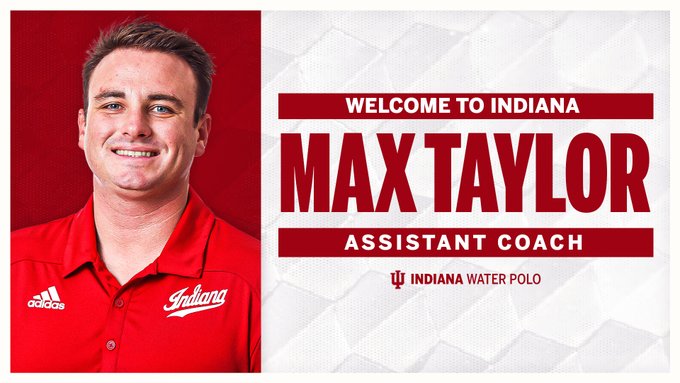 Taylor joins the Hoosiers' program after a four-year stint at Whittier College as an assistant coach for men's and women's water polo. Current photo via @IndianaWPolo/Twitter

In his time at Whittier, he helped coach the Poets which include national championships on both sides (women, 2022 and men, 2019) as the men were also the 2019 SCIAC regular season championship along with a pair of runner-up finishes.

“I’m so thankful and appreciative of this opportunity to work with such an amazing women’s team” Taylor said. “What really drew me to Indiana was the top-notch facilities and resources for the athletes. Coach McInerney has built something really special here, and I can’t wait to start playing games and show everyone what we are made of.”

Taylor headed to Redlands after finishing up his time at LBCC where he led the team in scoring as a team captain in 2016 and 2017. Taylor helped his team to a 3rd place finish in the SCIAC Tournament. Taylor earned the honors of second team All-SCIAC, and an Honorable Mention All-American. In 2017, Taylor was first team All-SCIAC and second team All-American. He graduated from the University of Redlands with a bachelor’s degree in Political Science.