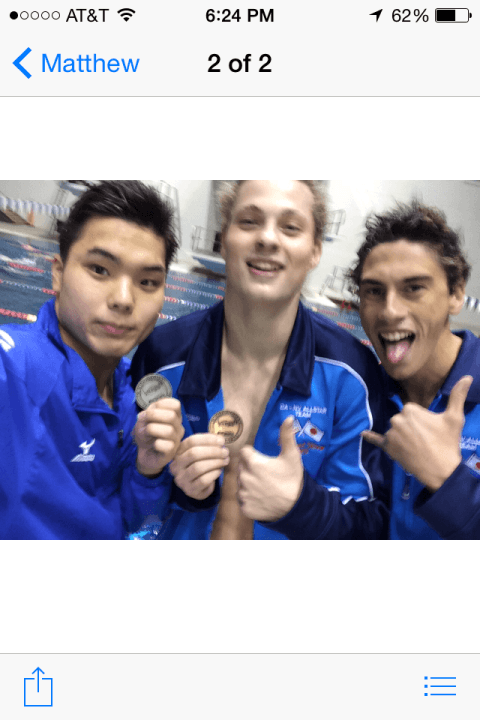 Matthew Klotz (middle) broke the Deaf Swimming World Record in the 100 backstroke on Sunday in Seattle, Washington. Pictured here with the 2nd (Tadaobu Tokiwa) and 3rd (Joshua Swart) place finishers in the race.

18-year old Sierra Marlins backstroker Matthew Klotz broke a pair of deaf World Records over the weekend as a California/Nevada all-star team welcomed in a team from Itoman in Japan for the annual trans-Pacific dual meet.

The meet was raced at the King Aquatic Center in Seattle this weekend, and Klotz’s records both came on Sunday. First, he split 27.14 in the 50 meter backstroke to leadoff the CA/NV 200 medley relay, though Itoman would ultimately win that race by half-a-second.

Klotz then clipped a narrow .05 seconds off of his own World Record in the 100 long course meter backstroke later in the day, swimming a 57.83 to win that race. The old record was the 57.88 that he swam at last year’s Summer Junior National Championships.

Klotz is currently on a gap year between high school and college and will swim for LSU next fall. His sprint shave-and-taper meet will come in two weeks at the Sectional Championship meet in College Station, Texas.