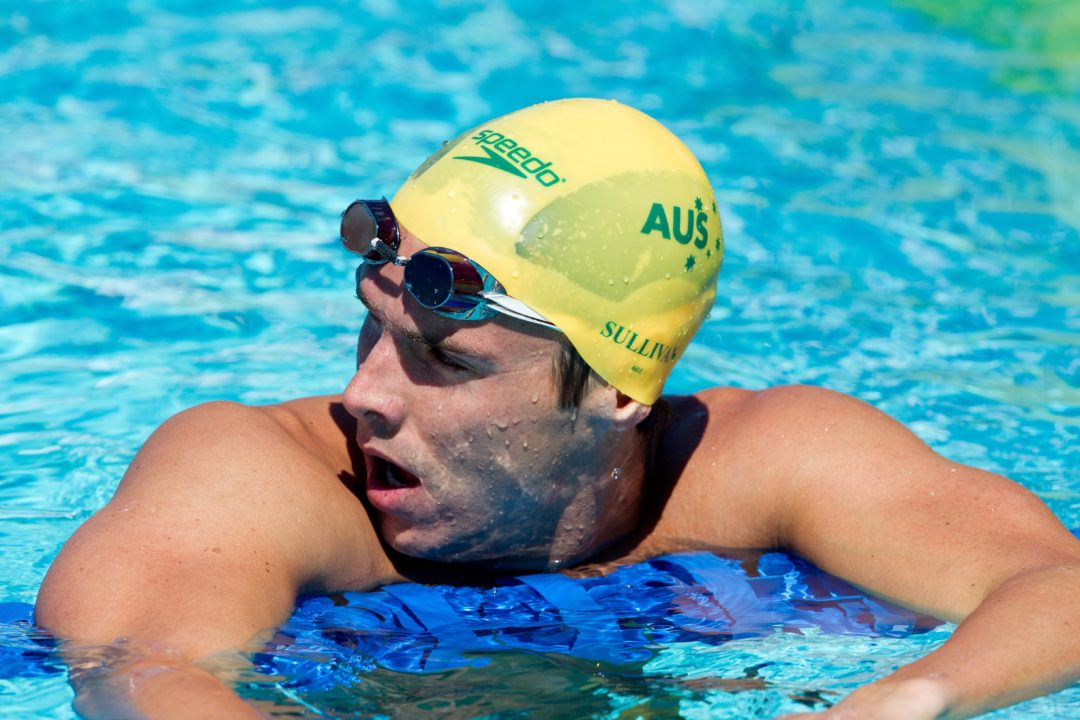 Eamon Sullivan was always a "maybe" for the Commonwealth Games, and has now formally withdrawn. Archive photo via Tim Binning/TheSwimPictures.com

Triple Olympian Eamon Sullivan has had to withdraw from the Australian Swim Team for the Glasgow Commonwealth Games in July, due to an ongoing shoulder injury, with his place on the team to be taken by former training partner Matthew Abood.

Having qualified for the men’s 50m freestyle for Glasgow, after winning the national title in April, in his first major meet back since the London Olympics, 28-year-old Sullivan said it was a difficult decision to make, but one that was made with the long term goal of the 2016 Olympics in mind.

“It is very disappointing that I am having to withdraw from the Commonwealth Games team.  This wasn’t an easy decision, but it has been made with the longevity of my career in mind, and with Rio as my ultimate goal,” said Sullivan.

“Whilst my shoulder operation went well, and I have done everything in my control to get myself training at the level I know is required to compete at the Commonwealth Games, it is simply not race ready and I do not feel that I will be in a position to compete at my best in Glasgow.”

“In my brief time back on the team, it has been fantastic to see the great sense of team work and reinvigorated camaraderie.  Australian swimming is heading in the right direction, and I am looking forward to seeing the team do their best in Glasgow.”

Australian Commonwealth Games Association CEO Perry Crosswhite AM said it was disappointing Sullivan would not be joining the team in Scotland.

“It’s disappointing that Eamon won’t be able to join us in Glasgow, and we wish him all the best with his future and recovery,” said Crosswhite.

“We would like to welcome Matt Abood onto his first Commonwealth Games team and we look forward to seeing him, and the entire team swim in less than 50 days from now.”

Swimming Australia Performance Director Michael Scott said Sullivan’s professional approach to the decision and his injury management this year has been exemplary.

“Eamon is an experienced athlete who has made a very mature decision with his long term health and fitness in mind, and the goal of competing at a fourth Olympic Games in Rio,” said Scott.

“We’ve been in constant contact with Eamon prior to his selection on the team in April and since, and have been monitoring the situation with our medical staff and his coach Mick Palfery during that time.”

“While it’s disappointing we won’t have someone of Eamon’s experience with us in Glasgow, in Matt Abood we have a replacement who has swum some world class times this year, and an athlete who is also part of leadership group.”

A member of the 2011 world championship winning relay team, Matt Abood originally missed out on a spot for Glasgow after a swim off with James Magnussen for the final spot in 50m freestyle. His time in that swim off was quicker than the final and sign that he can step up and swim fast when required.

Abood has joined the team in Brisbane this weekend for Grand Prix 2 at the Chandler Aquatic Centre, while Sullivan will continue his recovery in Perth.

The above is a press release submitted by Swimming Australia. Below is the updated Australian roster for the 2014 Commonwealth Games.

This is off topic, but hoping for some insight. Michael Andrew mentioned that after his last Grand Prix meet that be would be “taking a break”. Does that mean with training altogether or just meets for a while? And does anyone know when he will be returning to competition?

I’m bored, so checked his Twitter. Looks like he’s been training, and is at a meet this weekend. Just haven’t heard much about him because he’s no longer breaking a NAG every other day. 🙂

But speaking of young American male swimmers, I don’t think either Bentz, Conger, or Dressel have done a long course meet this year. I’m assuming they’re just training consistently for nationals, and it’ll be really interesting to see how they end up doing this summer.

My apologies to the Aussies for hijacking your story.