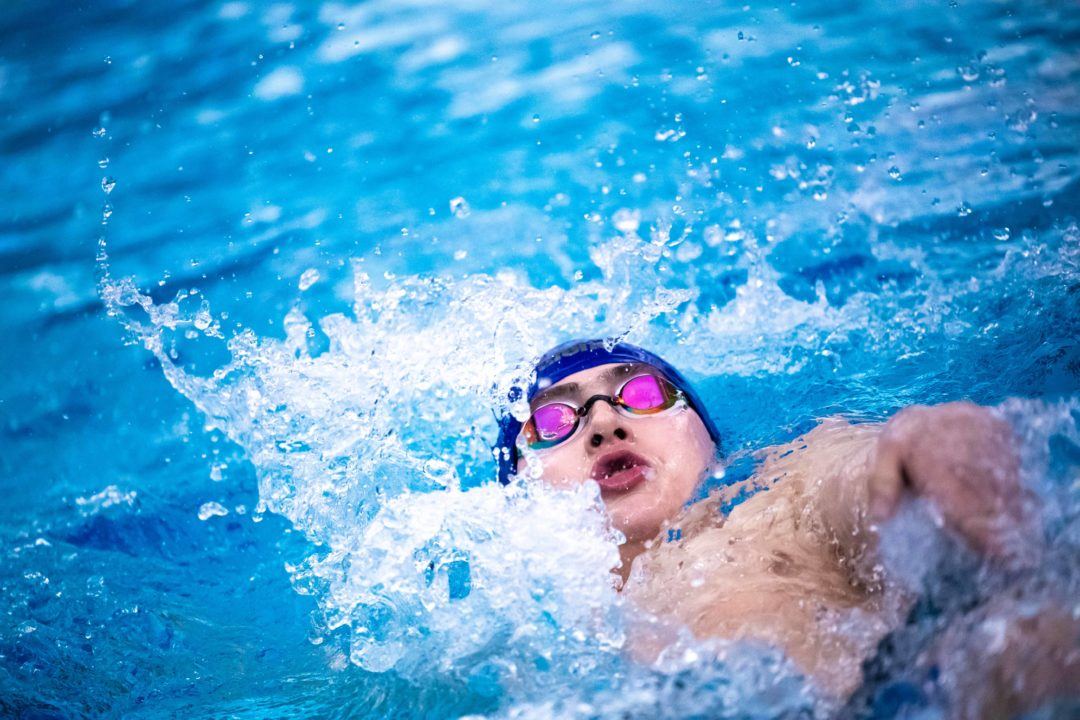 GSCY’s Matt Fallon dominated in the 200 IM, touching in a time of 1:45.67 to cut 2 seconds off of his best time on night one of the Y Festival in Voorhees. Archive photo via Mike Lewis/Ola Vista Photography

The second weekend of the YMCA Spring Festival kicked off in New Jersey with a total of 17 teams competing at the NL Aquatic Center. The festival is designed to serve as a Multi-site replacement for the YMCA National Championships, which were canceled due to the coronavirus pandemic. More information about the format of the spring festival can be found here.

GSCY’s Matt Fallon dominated the field in the 200 IM, touching almost 5 seconds ahead of the field. Fallon touched in a time of 1:45.67, cutting 2 seconds off of his personal best. With his swim, Fallon moves to #78 all-time in the 17-18 age group, tying American record holder Ian Finney. The Penn commit has been on a roll in the pool lately, breaking the National HS Record in the 400m free, posting a personal best in the 200 breaststroke, and throwing down a 8:56 in the 1000 freestyle within the last few months.

Alexy then combined with his GSCY teammates Fallon, Trent Russano, and Rob Alexy to claim victory in the 200 medley relay with a time of 1:28.66. On the relay, Fallon split a quick 24.31 on the breaststroke leg, while Jack Alexy threw down a 21.72 on the backstroke leg. The relay set a new YMCA National Record with their performance.

15-year-old Emily Thompson of GSCY won the 200 IM, touching in a time of 2:00.21. Thompson dropped almost 2 seconds off of her best time en route to victory, defending her top seed from prelims in the process. Thompson’s teammate Julia Meisner came in second with a time of 2:02.80, cutting a second off of her personal best.

Greater Somerset got its third individual victory of the night via 17-year-old Danielle D’Ambrosio, who won the 50 freestyle in a time of 23.73, chopping a tenth off of her best time. Behind D’Ambrosio, the race for second came down to .01 between Ema Habjan and Katie Lawrence with Habjan touching in 23.90 to Lawrence’s 23.91. Although she was disqualified in finals for a false start, Westfield Area’s Clare Logan actually posted the fastest swim of the day during the prelims  session with her time of 22.54. Her swim set new NJ LSC women’s 15-18 and open records, breaking the previous record of 22.88 set by former US National Team member Caroline Baldwin. Baldwin is now ranked as the 14th-fastest 15-year-old in history in the event and the second fastest 15-16 year old in the country this season.

The Greater Monmouth Swim Team closed out the night with a win in the 200 medley relay. The team of Lily Hughes, Emma Shaughnessy, Arabella Lee, and Jessica Zebrowski combined for a time of 1:42.77, dropping over 5 seconds off of his seed time.

Curtiss might just become the next great sprinter. I don’t think any teenager right now is on his level to swim fast in LCM and SCY. Dressel and Andrew a few years back produced similar times I believe.

7
0
Reply
an ordinary swimmer
Reply to  Will 37

well what about Alexy?

Two other excellent swims not noted in the article:

While Clare Logan of the Westfield Area YMCA (WY) DQ’ed in the finals of the 50 Free for flinching at the start, she swam a 22.54 placing first in prelims. This broke the NJ LSC women’s 15-18 and Open record of 22.88 set in 2014 by former US National Team member Caroline Baldwin (who also swam for the Westfield Y).

congrats to all these swimmers the boys 200 medley relay time of 1:28.66 is a new YMCA national record besting the previous mark of 1:29.86 by a significant margin