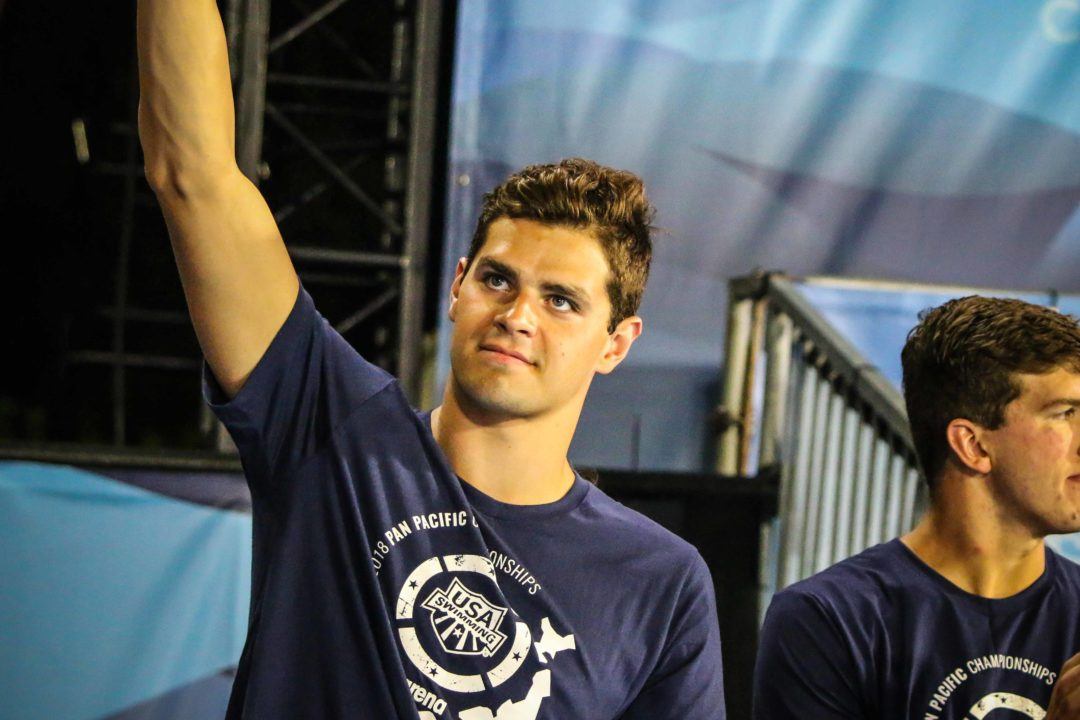 MA also answered the question "where would you have gone to college?" Stock photo via Jack Spitser/Spitser Photography

Michael Andrew posted a Q&A video on his YouTube channel last week, where Andrew and his sister addressed questions regarding their family’s move to California, his choice to go pro at such a young age, and where he would have gone to college. Before he got into the questions, Andrew did also tease a new ‘virtual coaching’ feature to be coming in the future, where swimmers can send in videos of them training, and Andrew and his father will give feedback on the videos.

MA’s sister Michaela joined the video to answer the question “why did you move to California?”, revealing that it was actually something of a birthday present to her. Michaela explains that she felt the family’s focus was always on Michael’s swimming career. For her last birthday, she took a trip down the coast of California, and at the end of it her mom revealed that if Michaela wanted to move to California, the family would move. She and Michael then went on to explain that Michaela has dreams of traveling the world surfing, and opening a coffee shop later in her life.

MA also answered the question “where would you have gone to college?”, and before he answered, he stated “I’m not going to college, nobody worry”. Andrew then went on to reveal that “it’s a difficult question”, but “I think I’d probably hook’em horns”, indicating that Texas would have been his top choice.

He also gave a pretty candid response when asked about what it was like to go pro so young. Andrew talked about it being “awful” for a long time, because it caused him to put in a very stressful position where he felt he had to prove his worth. He says after he went pro he was consumed by a fear of failure, and that fear had in turn set him up for failure. But then, he went on to talk about how he learned to accept that his swimming doesn’t define him, and that he now feels “super blessed” to have learned that at such a young age.

What does Mr Andrew do for a living? Does anyone know?

Mr. Andrew being Michael? Or Peter? Peter Andrew is a professional swim coach that does clinics and coaches his son: a Pan Pacs gold medalist.

But before Michael turned pro, how did he make a living. They had a big spread with an indoor pool. I doubt he had a career coaching job then.

He was Michael’s first coach, at a club in South Dakota that he founded. I don’t know what his full career history is, but at some point he was a member of the Naval Operation Dive Team with the South African Naval Defense Force. He also worked in pest control, agriculture, and home restoration. I think he did a lot of the construction of that house and pool himself (it was a very pretty house – I’ve been there).

They were both Gladiators on TV

I don’t think Peter was ever a Gladiator. He tried out, but I don’t know that Peter made it. Tina was a Gladiator, however: https://swimswam.com/off-the-deep-end-the-gladiators-of-swimming-literally/

Selling him short. He was also on the SCM Worlds coaching staff.

So is he not going to college at all? Like not to swim but for an education?

I wouldn’t be surprised if he gets his degree online from Liberty.

You don’t have to speculate as he has enrolled in their online program: https://www.liberty.edu/news/index.cfm?PID=18495&MID=197973

LUOA is for home schooling (as it mentions in the linked article). It’s quite possible he has enrolled in the degree program, but it doesn’t seem likely given the lack of mention and lack of publicity from whatever program he enrolled in.

Ah yes I see that now. I really hope he pursues a college degree at some point. The fact that he says “I’m not going to college. Nobody worry,” indicates he might have a negative view of college though which is disappointing.

I’m not sure on his views of it. I seem to remember reading an interview his dad gave which implied a negative view of college (liberal politics and such) but I don’t know if that translates to the degree or just attendance, or if Peter’s views have shifted and/or influenced MA on that regard. Time will tell

If he went somewhere like Liberty, liberal politics wouldn’t be an issue. Or at other conservative Christian colleges. I’m not sure why they have that view of college, especially since he could still get a degree without the liberal politics…it makes me think their view has nothing to do with politics.

Let’s see. More sex, drugs, and rock and roll: college or hanging out on the beach surfing in SoCal during the work/school week?

Rock and roll is still a thing?

I mean, what’s wrong with having a negative view of college?

It’s not really for everyone, nothing wrong w/ that.

I guess that’s true. I just wonder what he plans to do after swimming without a degree or any other sort of training, trade school, etc. Maybe he will get into coaching, but many major club and college positions require a college degree.

+1 for your comment. More people should have a “negative” view of college..if only from the standpoint that too many people are going, that probably should not be. Changing the conversation in this country that “everyone should go to college” would go a long way towards helping the student loan crisis. I have many customers with a trade, and they are making more money than most college graduates without six figures of student loan debt to drag along.

And there are way too many jobs that “require” a college degree.

I dont think that’s disappointing. Seems pragmatic. The value of a college degree is shifting as tuition skyrockets and the student loan debt bubble grows. I’m almost at the point where I’d advise that if you’re paying for it yourself (i.e. student loans) you shouldn’t go to college unless you’re going for law, medicine, or STEM (and with that last one, there are many alternatives to the traditional college track that will get you a great career in tech). If your parents can pay for your school or you have a full ride, sure, the value might be higher and you can do what you want, but I don’t think it’s wrong of the Andrews to be skeptical of the… Read more »

Michael has given Coach Jake many pointers on coaching elite level athletes and the proper usage of power towers. However MA is not permitted to establish Liberty Men’s Team Records, however Coach Jake does keep them in his journal

The main purpose of college is to get a higher education, so you can get a better paying job, so you can make more money so you can live happier. MA probably won’t need that. I think he can possibly win gold at Tokyo in the 50 free

Well, pointers on coaching “elite level athletes” would appear to be wasted energy, unless the Liberty pro group has some sensational talent.

So Coach Jake just keeps a journal of MA’s best times? Does he really need a journal for that? They are readily available online. I’m confused by this comment.

In the UK, a lot of pros swim as guests at the universities champs (heats only). It’d be cool to see the same at NCAAs. Throwing MA in the 200 IM vs Seli would be awesome.

interesting factoid, didn’t know that! any other ountries do this? (Australia?)