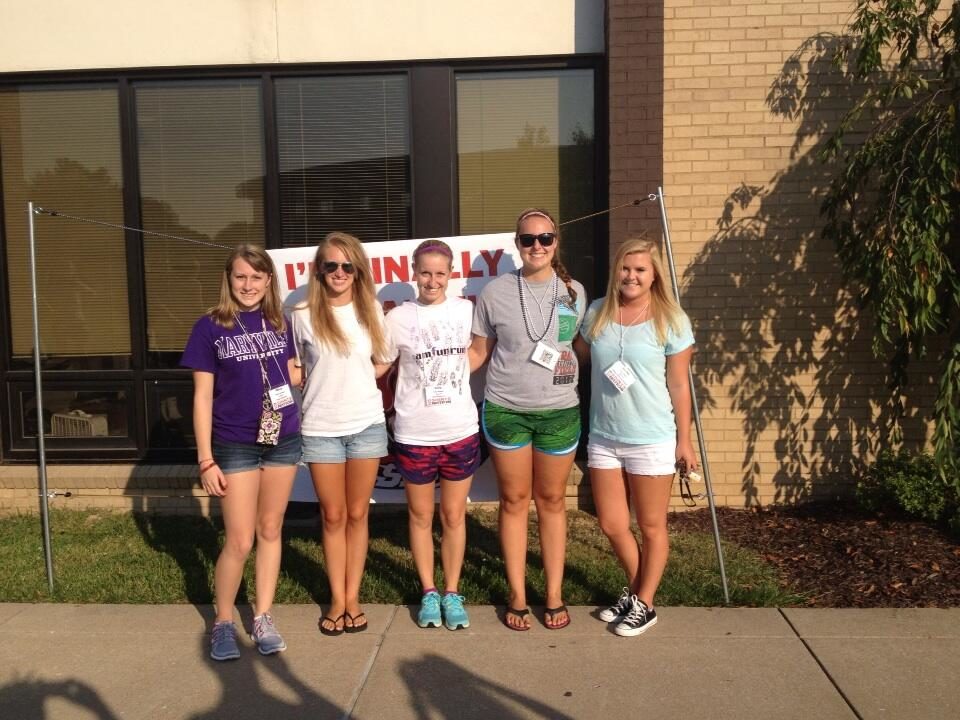 Aboe are the 5 current freshman on the roster at the University of Maryville. Current photo via Maryville Swimming

The Maryville Saints, who are swimming their way through their first season in the NCAA’s Division II, has announced their first formal recruiting class of 6 swimmers who have signed National Letters of Intent after the team has some results to show for their efforts. That will nearly double the number of swimmers (8) who are on the roster this season.

The class includes four swimmers from within the state of Missouri: a state whose swimming population has grown in the last few years, and looks to continue doing so as more-and-more college opportunities arise in the state.

This class is a big one for head coach Mandy Chung. In their first year, the Saints are swimming well, with lots of swimmers (5 of the 8 are freshmen) approaching or surpassing lifetime bests.

But what they are lacking is what is the foundation of a competitive collegiate program: freestylers. None of the Maryville swimmers have been under 1:01 yet this season. This freshman class, however, should sweep in improvements in that department. Alef, Jones, and King all have lifetime bests of 59’s in the 100 yard freestyle, Alef has been 26.1 in the 50 yard freestyle, and the real star is Brooke Popejoy from the Tsunami Swim Team who has yards bests of 25.77, 56.01, and 2:02.61 in the 50, 100, and 200 yard freestyles.

The full release, with some background on each swimmer, is below. The program seems to have capitalized on its majors offered in the medical field: two of the six will study occupational therapy, two will study nursing, and one will study physical therapy.

This class sets a nice tone for the program, as they’ve signed a class that ensures an upward track. The Saints return to the pool at the Washington University Invite on January 10th and 11th.

“We are extremely excited about the talented group of student-athletes who made the decision to join us here at Maryville University,” Chun said. “Every one of them has the ability to make an immediate impact on the program, and I cannot wait to have the chance to coach them. We wanted to add depth to the program, and we brought in newcomers who have high character and fit the student-athlete we want to represent Maryville’s tradition and culture.”

Alef is a member of the DeKalb County Swim Team and attended Kaneland Senior High School.  She specializes in distance freestyle and has qualified for the 2013 North Central Illinois Swimming Conference. Alef finished fourth in the 200 individual medley, seventh in the 200 freestyle, fifth in the 100 breaststroke and was the anchor in the winning 200 medley relay. She plans to major in occupational therapy.

Jones comes out of Hudsonville Eagles Aquatic Team and is a member of the Hudsonville High School swim team. She placed third in the 200 IM and 100 breaststroke events at the 2013 OK Red Conference Championships, qualifying her for the 2013 Michigan DI State Championships. Jones plans to major in physical therapy.

Olson is a member of Kearney High School’s swim team and specializes in the butterfly and distance freestyle events. At the 2013 conference championships, Olson finished second in the 100 butterfly and third in the 200 freestyle. She was a member of Kearney’s 200-freestyle and 200-medley MSHSAA State Championship qualifying relay teams. Olson plans to major in nursing.

Parks swims for Club North Swimming and is also a member of the Liberty North High School swim team. She is a 2013 conference champion in the 100 backstroke and has qualified for the MSHSAA State Championships in the 100 backstroke and 500 freestyle. Parks was also a member of the 200 and 400 state qualifying freestyle relays and a USA Swimming Division I qualifier.  She plans to study occupational therapy.