Mary McCuskey Among 2021 Inductees Into UNI Hall of Fame 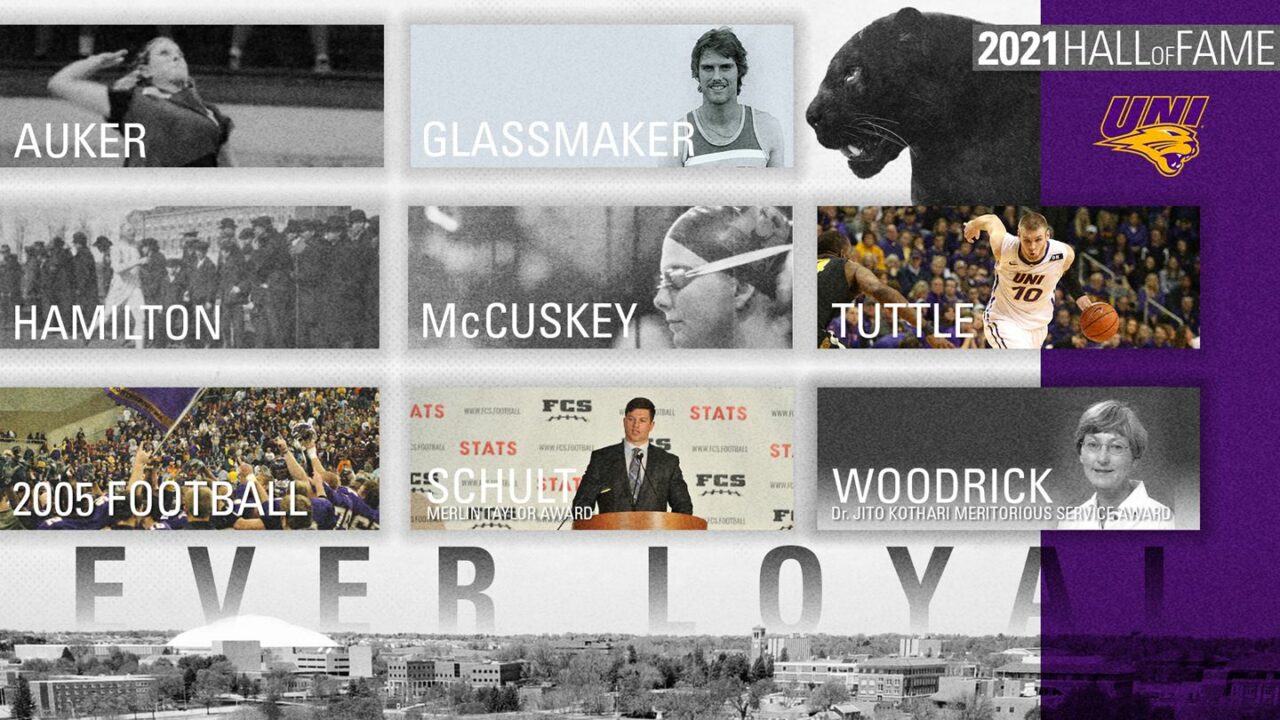 McCuskey was a multiple-time conference champion in the 1650 freestyle and held eight school records at the end of her career. Current photo via UNI Athletics

CEDAR FALLS, Iowa – UNI Athletics will induct seven individuals and the 2005 Football NCAA FCS finalist team into the Hall of Fame as part of the 2021 induction class. The class will include the earliest Panther student-athlete to be entered into the hall in William Franklin “Red” Hamilton and a first-ballot Hall of Fame selection in All-American and newly-hired assistant basketball coach Seth Tuttle.

The ceremony will be held on Friday, September 17 at 5:30 p.m. at the Bien Venu Event Center at the Holiday Inn in Cedar Falls. The Hall of Fame inductees will be honored at the September 18 game against St. Thomas which is scheduled to kick off at 4 p.m. Limited tickets to the event are available and can be purchased by contacting Ann Arns at [email protected]

Auker’s name still peppers the UNI record book two decades after she suited up for the Panthers. She is ranked 8th on UNI’s career kills rankings, 7th in kills per set, 6th in attack attempts, 10th in digs and 10th in digs per set. She is 8th in points and 7th in points per set. She was a three-time MVC All-Conference honoree, earning first-team marks in 1998 and 1999. She was also a three-time All-Tournament team honoree and earned MVP honors in 1999 and 2000. She was an AVCA All-District choice in 1999. On top of her career on the court, she took care of business in the classroom where she earned Scholar-Athlete honors three times. She was a member of the 1999 Sweet-16 team. She was inducted into her high school Hall of Fame in Byron, Ill. in 2012.

Hamilton was born State Center, Iowa, but was farm-raised in rural Jasper County. He had “no record to distinguish him, in an athletic way from any other youthful aspirants” when he tried out for the Iowa State Normal School in track team in 1903. When he left school in 1906, he held every school sprinting record and the ISNS long jump mark. He was known as “the best college sprinter in Iowa.” He also won the 100 and 200 at the Western Conference Meet, a meet with some of the best college track and field athletes in the country. He went on to win the AAU National Championship, the de facto Olympic Team Trials, to earn a spot on the 1908 London Olympic squad. He competed in the 100-meter, 200-meter and sprint-medley relay. He won gold as a member of the relay team, becoming the first ISNS athlete to earn an Olympic gold medal. He went on to earn a medical degree from Louisville and returned to Iowa where he worked as a medical doctor in Marshalltown before moving to Los Angeles. He passed away in 1955. He had two daughters and three grandchildren. His grandson William “Bill” Hamilton Jarvis will accept the honor for the family.  He was also a standout football player for the Normal School.

The Hall of Fame has become something of a tradition in her family. Her grandfather Dave McCuskey, a former Panther wrestling coach, was a member of the inaugural UNI Athletics Hall of Fame class in 1985.

Tuttle was the first Panther to earn NCAA Division I All-American Second-Team honors. He finished his career as the No. 4 all-time scorer in UNI history with 1,747 points and was the only Panther to start every game that UNI played over a four-year stretch.

He was a seven-time MVC Player of the Week, the most in school history and a two-year All-Conference honoree. He was the 2012 MVC Freshman of the Year and the 2015 Larry Bird Player of the Year. He was also the USBWA District Player of the Year. He helped lead the Panthers to the 2015 NCAA Tournament Second Round. He tallied 21 career double-doubles and is ranked second in free throws made, fifth in career field goal percentage and sixth all-time for blocked shots.

After graduation, he signed to play with the Miami Heat’s summer-league team before playing three seasons in European basketball. He joined the Panther coaching staff in 2018 as a graduate assistant before becoming the video coordinator in 2020. He was named an assistant coach in the spring of 2021.

The 2005 football team advanced further than any team in school history. The Panthers went 3-1 in non-conference with the only loss coming against a ranked Iowa team. UNI started the Gateway schedule 2-2 before facing three ranked teams to close Gateway play. The Panthers topped 11th-ranked Youngstown State 21-7, beat No. 6 Western Kentucky 23-20 in double overtime and No. 4 Southern Illinois 25-24 in the UNI-Dome. After closing out the regular season with a non-conference game against Northern Arizona, the Panthers opened the FCS playoffs against Eastern Washington. The Panther edged the Eagles 41-38 to advance to play No. 1 seeded New Hampshire. UNI upset the top-ranked Wildcats 24-21 in the quarterfinals. The Panthers faced Texas State on the road and again pulled the upset, this time 40-37 in overtime to advance to the championship game. The Panthers fell to Appalachian State in a hard-fought title game, but the team was cemented as one of UNI’s best. Despite the deepest run in school history, the Panthers did not have a single first-team All-American. Quarterback Eric Sanders earned second-team honors from CollegeSportsReport.com, while linebacker Darin Heideman earned second-team honors and defensive end Darin Heideman picked up third-team honors from the Associated Press. Only the Heidemans and Chad Rinehart earned first-team Gateway Conference honors.

Schult earns the Merlin Taylor Award for his work on and off the field. Schult is one of two Panthers ever to earn finalists honors for the William V. Campbell Trophy, also known as the “Academic Heisman.”  He finished school with a 3.87 GPA and earned a degree in movement and exercise science. He also earned the MVFC President’s Award and was a finalist for the ACS ADA Postgraduate Scholarship and was named an FCS Athletic Directors Academic All-Star. He was a two-time CoSIDA First-Team Academic All-America. On top of his academic honors, he earned the Buck Buchanan Award as the FCS’ top Defensive Player becoming the only Panther to earn the honor. He was a consensus All-American in 2016 and was a two-year First-Team All-MVFC honoree.

Woodrick, the longtime faculty athletic rep, is a professor of Sociology, Anthropology and Criminology, Anthropology. She served on the MVC President’s Council and was a member of the hiring committee that hired women’s basketball head coach Tanya Warren. She impacted the lives of countless student-athletes through her advocacy and leadership.

UNI Athletics is always accepting applications to the Hall of Fame. The nomination form can be found here.