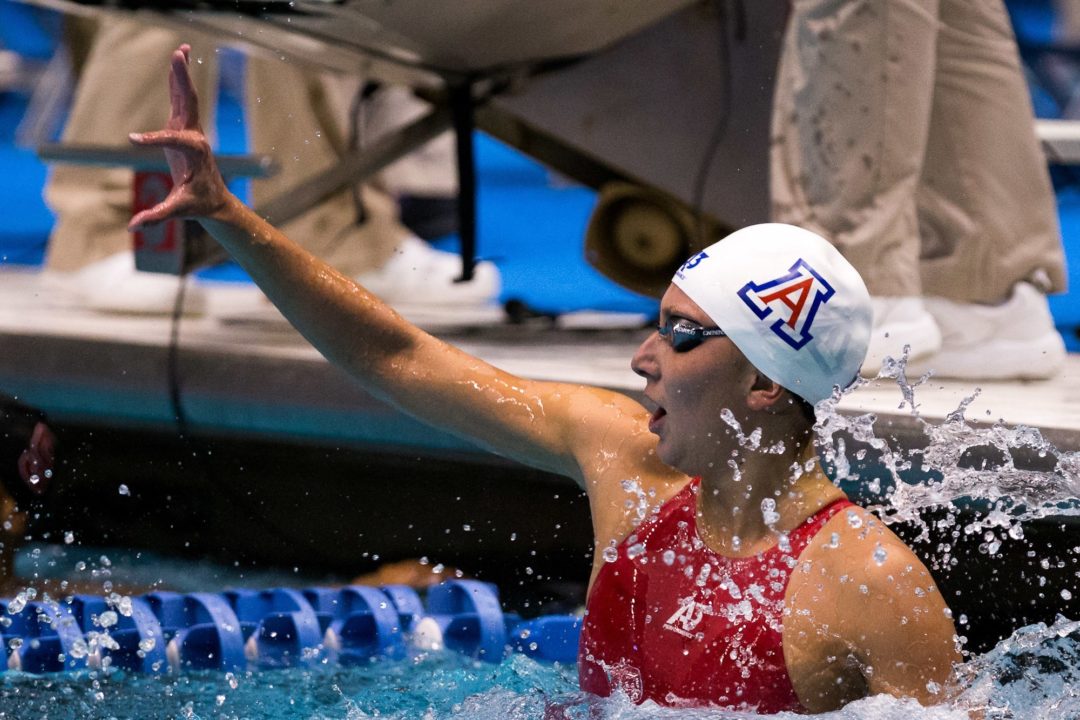 Arizona Junior, Margo Geer, had the fastest leadoff split in the 200 free relay, the fastest anchor split on the 400 medley relay, and claimed her first NCAA Title in the 50 freestyle. (Photo Courtesy: Tim Binning/TheSwimPictures.com)

Arizona’s Margo Geer matched exactly her 50 freestyle prelims swim, posting another 21.73 in the 50 free for her first career NCAA title (either individually or as a relay).

After a lot of shaking back-and-forth, this 50 free final went fairly close to expectation, especially at the top. Georgia’s Megan Romano was 2nd in 21.88, but then in a bit of a surprise it was Tennessee’s Faith Johnson who took 3rd in 21.89 – just a freshman.

Tennessee reaffirmed that relay victory from earlier in the meet with two swimmers in the top four of this 50 freestyle; Caroline Simmons tied for 4th in 22.01 with Stanford sophomore Maddy Schaefer.

Wisconsin’s Ivy Martin was 6th in 22.03, followed by Kasey Carlson and Chantal van Landeghem from USC, and Georgia, respectively.

The only swimmer who didn’t match-or-improve her prelims swim was Schaefer, and she was off by just a minuscule .02.

Natalie Hinds, a Florida freshman, won the B-Final in 22.12, making this a “true flighting,” where the whole A beat the whole B. That’s pretty rare at these NCAA Championship meets.

Tiffany Oliver gave Florida State a little bit of a lift by getting her hand on the wall in 22.23 for 10th; Arizona’s Megan Lafferty was 11th in 22.33.

Way to go Margo. Our entire family is proud if you. All your dedication and hard work is really paying off. Keep up the great work