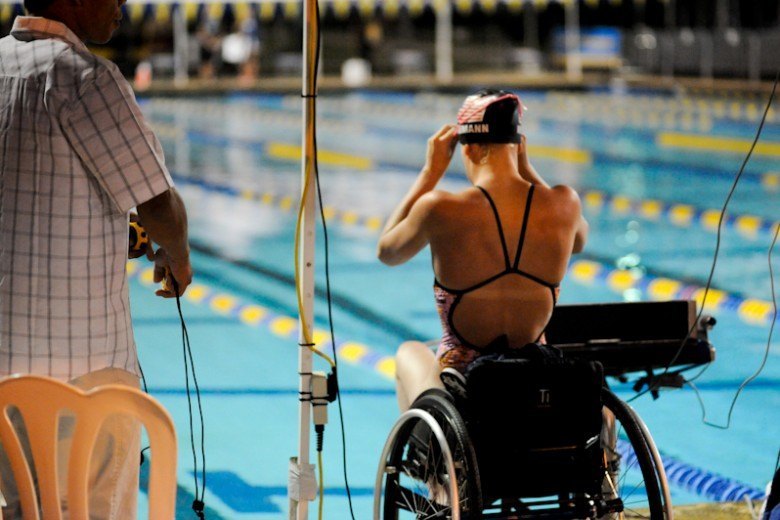 Mallory Weggemann has launched a crowdsourcing fundraiser to help her on her way to 'new mobility'. (Photo: Melissa Lundie)

Just 5 days shy of the beginning of the 2013 IPC World Swimming Championships in Montreal, Canada, 2012 Paralympic 50 free champion and two-time World Disabled Swimmer of the Year Mallory Weggemann has launched a campaign to raise money for “new mobility”.

Weggemann was an aspiring high-level competition swimmer in January of 2008, when she went to a medical clinic to receive an epidural injection for back pain. That would be the last time she would walk, as the procedure left her paralyzed from the bellybutton down.

She wasn’t held back for long, though, as within four months she was back to training, and quickly became one of the world’s top Paralympic swimmers.

All along, though, her dream has been to regain use of her legs. Having had full use of her legs for most of her life has left her wanting to walk once again.

“Since my paralysis in 2008 I have dreamed of walking, I have dreamed of what it would be like to be up right and moving towards something again,” Weggemann said. “It is a dream that is hard to be so vocal about because it seems so simple; something that for most of my life was second nature until all of a sudden it was lost. Now I am ready to chase this dream but I know I can’t do it alone.”

And so she has set a goal of raising $50,000 to send herself to the Rehabilitation Institute of Michigan, where she will join a specialized program in Detroit to learn how to use arm crutches or a walker to move with the use of specially designed leg braces instead of being confined to a wheelchair. Though with present technology, she is unable to regain any function, the braces will help her navigate the dry-world more easily.

This is a potential first step for Mallory. Advances in science continue to bring hope that a cure to paralysis is on the horizon, including different techniques with exoskeletons and artificial nervous systems that circumvent the damaged ones causing paralysis.

That all is still some years off, though, and for now, these braces will give Mallory a new take on ‘mobility’.

As the world prepares to watch the IPC Championships next week, and discuss how inspiring the athletes are, here is the call of action. If Mallory’s success in the face of adversity is inspiring to you, then be inspired to give. In return, you will receive rewards anywhere from a personal thank you video from Mallory (which, in my opinion, which begins Monday, August 12th, might be the best of all the rewards on her list). up to a day with her during her rehabilitation.

Weggemann was extremely ill at the World Championship Trials, and didn’t qualify for the team this year for Montreal, but many of her equally-inspirational colleagues will be there.

She’s just shy of 10% of the way to her goal, so share what you can here. If you’re not inspired yet, follow next week’s meet that begins on Monday, August 12th here on SwimSwam, and on the official IPC website here for video and results.