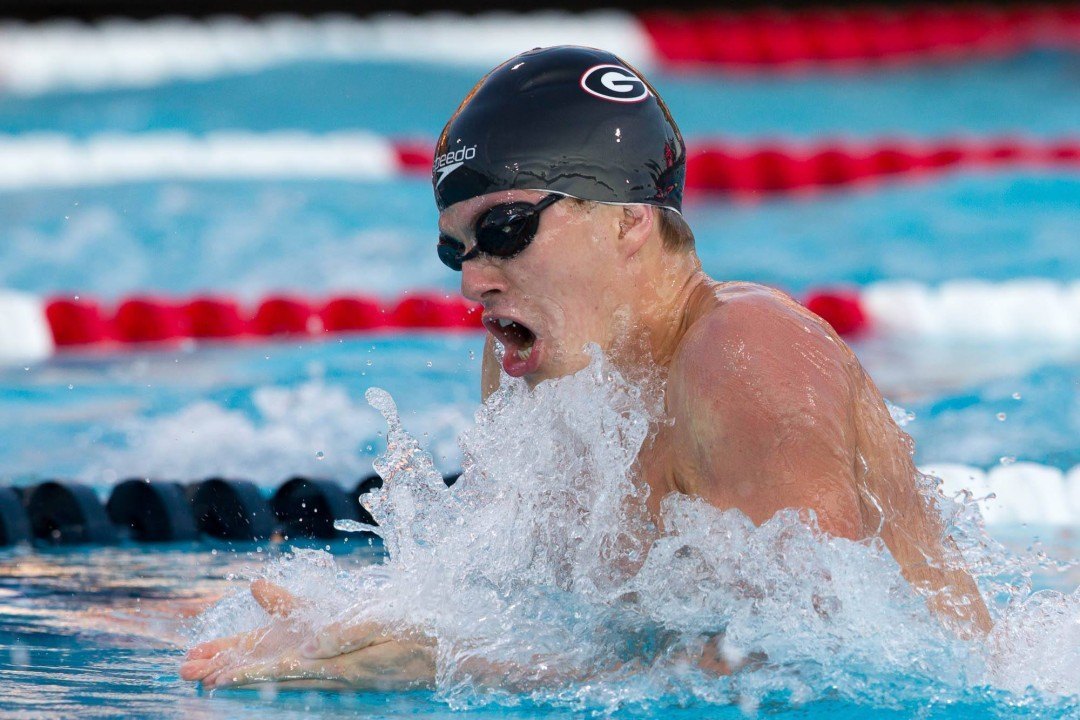 Nicolas Fink (above) and Maddie Locus have been nominated for the SEC's McWhorter Scholar-Athlete Post-Graduate Scholarship. Archive photo via Tim Binning/TheSwimPictures.com

BIRMINGHAM, Ala. — Swimmers Maddie Locus and Nicolas Fink have been nominated by Georgia for the Southeastern Conference’s H. Boyd McWhorter Scholar-Athlete Post-Graduate Scholarship.

The McWhorter Scholarship has been presented by the SEC since 1986 to the league’s top male and female scholar-athletes. The league will name the 2015 recipients on April 30.

Locus, a senior from Sugarland, Texas, recorded a 3.93 grade point average and graduated summa cum laude with a double major in Mathematics and Italian. She was named to the SEC and Georgia academic honor rolls this year and she earned UGA’s Women’s Swimming and Diving Scholarship. Locus has been invited to UGA’s Number Theory Seminar to present research from the Emory Research Experience for Undergraduates. She won the Outstanding Graduating Senior Italian Major/Minor Award and was chosen as a speaker for the Romance Languages Graduation Ceremony. Locus capped her collegiate swimming career by earning All-America status in the 50 and 100 freestyle and on the 200 and 400 freestyle relays at the NCAAs. She also notched All-SEC recognition with top-5 efforts in those events at the conference meet. Locus holds the third-fastest time in the 50 freestyle, the eighth-fastest time in the 100 freestyle and the ninth-fastest time in the 100 butterfly in school history, plus she led off the 200 freestyle relay that set the Georgia record.

Fink, a senior from Morristown, N.J., was chosen Tuesday as the SEC Male Scholar-Athlete of the Year for swimming and diving. He has a 3.80 GPA in Agricultural Engineering. Fink earned a Ramsey Scholarship for Academic and Athletic Excellence, won the Joel Eaves Award as the male senior student-athlete with the best GPA, and was named to the SEC and UGA academic honor rolls. Fink ended his career as a 19-time All-American, the second-highest total in school history. He won the 100 and 200 breaststroke titles at the SECs, becoming the first Bulldog and the second male in SEC history to win the 100 breaststroke all four years. Fink set school marks in the 100 and 200 breaststroke and ranks second in the 200 individual medley and seventh in the 50 freestyle in Georgia history, plus he helped the 200 and 400 freestyle and 200 and 400 medley relays set school records.

Each year, the SEC, in conjunction with AT&T, an SEC official sponsor, provides the McWhorter Scholarship recipients with a $15,000 post-graduate scholarship.  The 26 remaining male and female finalists for the award will receive a $7,500 post-graduate scholarship. The award recipients are chosen by a committee of Faculty Athletics Representatives from the 14 SEC institutions and are honored at the SEC Spring Meetings in Sandestin, Fla., in late May.