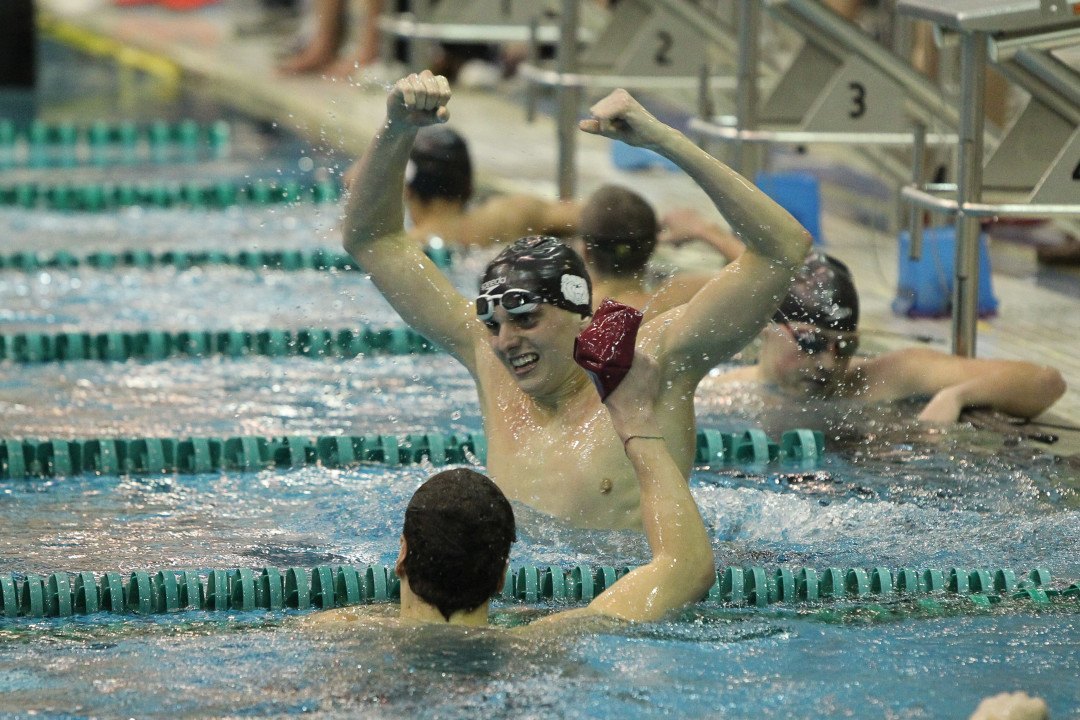 Last night we saw Missouri State fight their way into the lead over the first few events, only to lose it when Eastern Michigan and Buffalo came away with a diving advantage that put them well in front.  In day three action at the MAC we see Missouri State pull ahead on the strength of six of the top 9 scoring spots in the first event, only to see Eastern Michigan fight their way to the front again with outstanding depth throughout the rest of the session.  Overall on day three, two MAC Records and three Pool Records were broken, with close finishes highlighting what may be the deepest Mid-American Conference Championship meet on record.

Missouri State standout Uvis Kalnins managed to defend his MAC title in the 400 IM with 3:48.93.  This is his third time winning the event at this meet over his career and was fast enough to set the Jones Natatorium Record.  This was an extremely strong event for the Bears, with seven athletes scoring points, and five of them in the A-final.  Bears’ sophomore Christopher Heye finished runner-up in 3:50.69, followed by SIU’s Filippo Dell’Olio who overtook Buffalo’s Charles Barry on the last 50 to take 3rd in 3:51.25 over Barry’s 3:51.43.  Missouri State’s Ethan Bresette was also in that tight pack, finishing just behind them with 3:51.89 for 5th.  It was also a close finish for 6th through 8th places, with EMU’s Kyle Lichtenberg (3:55.09) making up ground on the freestyle leg to finish just ahead of Missouri State’s Bryce Blattner (3:55.27) and Miguel Davila (3:55.44.)

Buffalo freshman Mason Miller has been making a name for himself this weekend, winning his second event in two days.  His 47.07 was good enough to unseat Defending Champion Joao Facciotti from Southern Illinois, who managed to get out in the lead with a 21.82 split, but finished in 47.51 to take runner-up.  Missouri State’s Artur Osvath also made up ground on Facciotti in the back half of the race but came up just short, finishing in 47.57 for 3rd.  Eastern Michigan capitalized on 4th through 7th place finishes from Krzysztof Gilski (47.71,) Erik Gissen (48.10,) Logan Burton (48.42,) and Connor Johnson (48.82.)  Miami’s Pete Simcox turned in a 49.16 for 8th.

Last year EMU’s Andrew Henry and SIU’s Till Pallmann squared off in the 200 freestyle with Pallman coming out on top.  This year, Henry and Pallman duked it out again, with EMU’s Jake Tyson in the mix as well, splitting almost dead even with the pair through 150 yards. In a battle that was close from start to finish, it was Henry who threw the hammer down with a 24.44 final 50 split that Pallmann and Tyson couldn’t match.  Henry’s 1:34.99 broke the MAC Conference and Meet Records, leaving Pallman to finish second with 1:35.34, and Tyson 3rd with 1:35.57.  The Saluki’s also picked up 4th place points with a 1:36.68 finish from Andre Luiz Brilhante.  Missouri State landed 5th through 7th places with Will Brand at 1:37.71, Kacper Cwiek at 1:37.90 and Brenden Bolman at 1:39.17.  EMU’s JF Murphy closed out the A-final with 1:39.28 for 8th.

Buffalo’s Itai De La Vega made a significant improvement from last year’s runner-up finish, not only by becoming MAC Champion in the 100 breaststroke in 2016, but by doing it in record fashion.  His 53.69 took down the MAC Conference and Meet Records, as well as the Jones Natatorium Pool Record.  Missouri State put up a fight, with Uldis Tazans and Defending Champion Isaac Springer finishing close behind at 54.14 and 54.29 respectively.  Eastern Michigan’s Kyle Aerne (54.63,) Buffalo’s Scott Huang (54.81,) Miami’s Evan Bader (54.93,) and SIU’s Bobby Wood all finished below 55 seconds as well for 4th through 7th places respectively.  Miami’s Hutch Blackstone turned in 55.08 for 8th place.

The 400 Medley Relay was incredibly close from start to finish between the top three teams.  Southern Illinois got an early lead on a 47.79 from Till Pallmann, a time that would have made him MAC Champion for the 100 backstroke just a few minutes earlier. SIU held the lead slightly through the breaststroke on a 53.99 split from Bobby Wood, even with Buffalo boasting a blazing 53.01 split from Itai De La Vega, but lost their lead on the fly when Buffalo’s Mason Miller blasted a 46.65 to overtake Lucas Aquino who split 47.44.  With only the freestyle left, Eastern Michigan was still in the hunt as well, and almost took it all when Andrew Henry crushed the anchor leg with a 42.95 split.  Henry and the Eagles managed to overtake Buffalo but fell just short of making up enough ground on the Saluki’s who were spared by a 43.21 split from Andre Luiz Brilhante to take the crown.  Missouri State (3:14.85,) Miami (3:17.48,) Evansville (3:23.15,) and Ball State (3:24.95) closed out the A-final.

The MAC conference and meet record in the 200 free was actually established by Andrew Henry when leading off the 800 free relay on Wednesday night. He split a 1:34.20 in that race to give EMU a solid lead that would eventually result in a relay victory.

You are correct! Good catch. I hope they get that corrected on the live results as well!