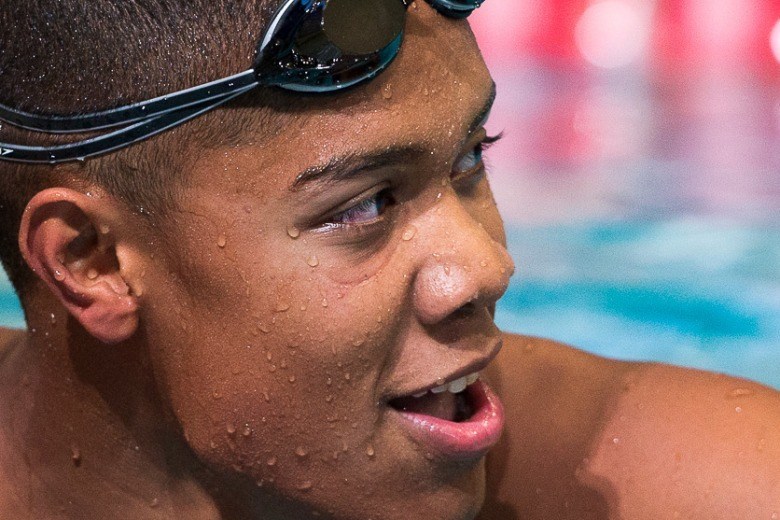 There was significant action in the B final of the men’s 100 butterfly where Justin Lynch posted a time of 52.75, 24 one-hundredths of a second faster than his morning swim and 23 one-hundreths of a second better that Michael Phelps 15 & 16 NAG record of 52.98, which was set in 2001. The time currently ranks Lynch 55th in the world this year (based on times coming into the meet), which is fairly lofty for a 16-year old on the men’s side of the pool. Perhaps not as high as Phelps was ranked at 16, but Phelps changed a lot of things.

Lynch, who represents the Terrapins Swim Team, also holds the 13 & 14 NAG record in the 100 butterfly with a time of 54.80, which was also a record that was held by Phelps.

Phelps’ progression (back to 14, which is as far back as the SWIMS database goes reliably)

As you can see, he’s crossed back-and-forth with Phelps’ progression a few times, but only by tenths here and there.

Lynch is one of two promising young butterfliers in the American ranks named “Justin,” not to be confused with his fellow Californian Justin Wright who isn’t at this meet. After a sort of a ”lag” in the butterfly events at the elite level in the United States, where everyone avoided the Phelps train, we’re now seeing the next wave of young talent who are more likely to be influenced by Phelps than scared off by him, and the future of American butterflying looks bright.

Thank you Mel for the interview. Happy to hear Justin targets the junior world championships.

Bobo…he was a nice kid, clearly smart and centered. Sounds like he has a lot more room to improve as well. Dryland only two days a week, and he’s dropping 52 in 100 fly….? Can’t wait to see what he does over the next 3 years…

Wow! That race was a thing of beauty! I’m sure he has amazing strength/pound of bodyweight, but relative to his competitors he’s a little guy. Surely there is lots of room for improvement there. What always made Phelps special in the 100 fly (aside from the underwaters, which Justin clearly has emphasized in his training) was the fact that he really trained for the 200 fly, so his finish in the 100 was always better than his sprint-focused competitors. Wouldn’t it be great to see Justin train at NBAC with Bowman/Phelps!

As u said Mel , he sounds very centered for his age and focused on his goals . He has a lot of potential to still bring out for the years to come . Probably the future of 100 butterfly for Usa .

His underwaters look really long and powerfull too .